When I mentioned to a friend that someone was coming over to see my garden last weekend she was surprised and said “What’s going on in your garden? Ours is looking like it’s done for the season.”

I think there’s always something interesting to look at in a garden (I’m the kind of person who has a great time touring a botanical garden in the winter), but I’m pleased to report that there is still a lot of colour, bloom and activity in my garden. Let me show you: 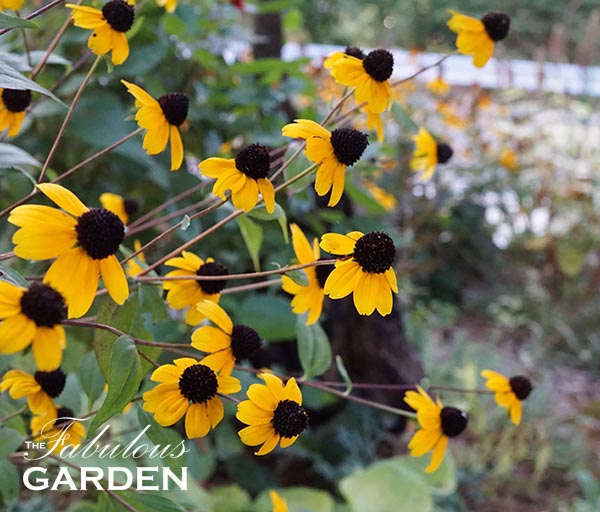 Black eyed susans (this one is Rudbeckia triloba) are the quintessential fall flower. These ones have self-seeded from place to place in my garden for over a decade. 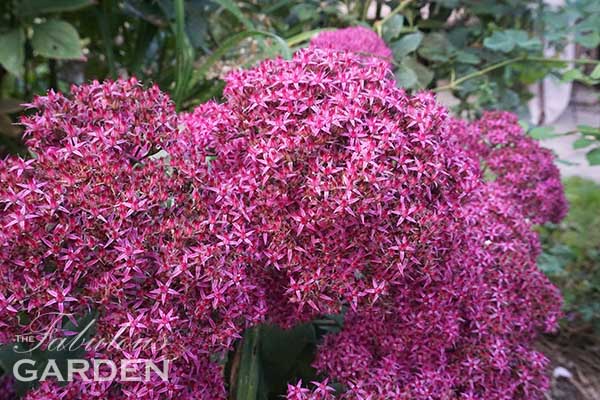 The blooms of this particular sedum are an awesome raspberry colour. I don’t know the variety–it was one of two plants a friend salvaged from someone’s trash–but it’s my favourite, even over the dark leaved varieties. 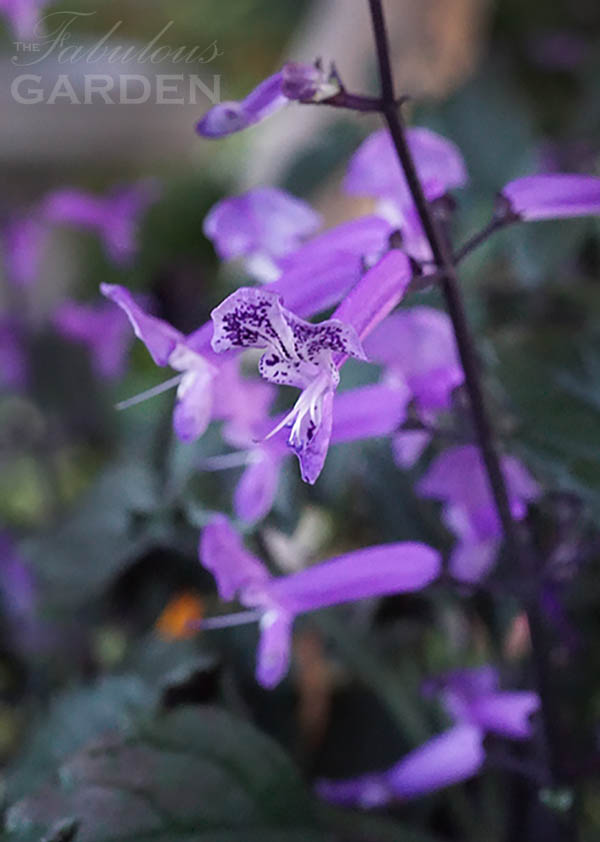 I think the flowers on this Plectranthus ‘Mona Lavender’ look like miniature orchids. This is an annual plant in my area, although you can keep it over the winter as a houseplant if you have the right conditions. I took cuttings from one last year, at the same time and using the same method as I used for my coleus, and this plant is the result. 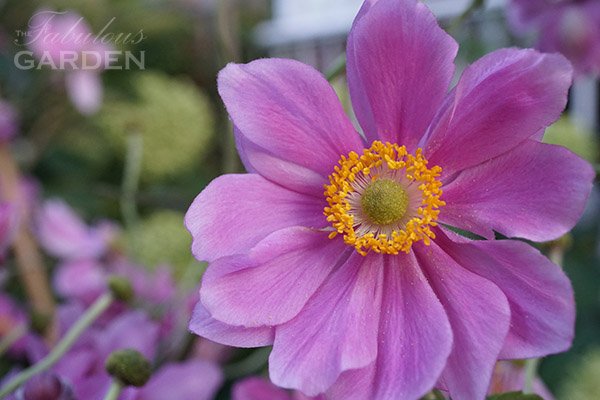 Japanese anemone doesn’t start to bloom until late summer, and then, wow, it just explodes. The blooms are on long, thin stems that can’t quite support their weight–I either have to step over them as they sprawl across the path or tie them up to supports. Japanese anemoe, which bloom in fall and form a nice sized clump, should not be confused with Canada anemone, which blooms in early summer and spreads like crazy (I’ve been ripping that one out of my garden for many years). 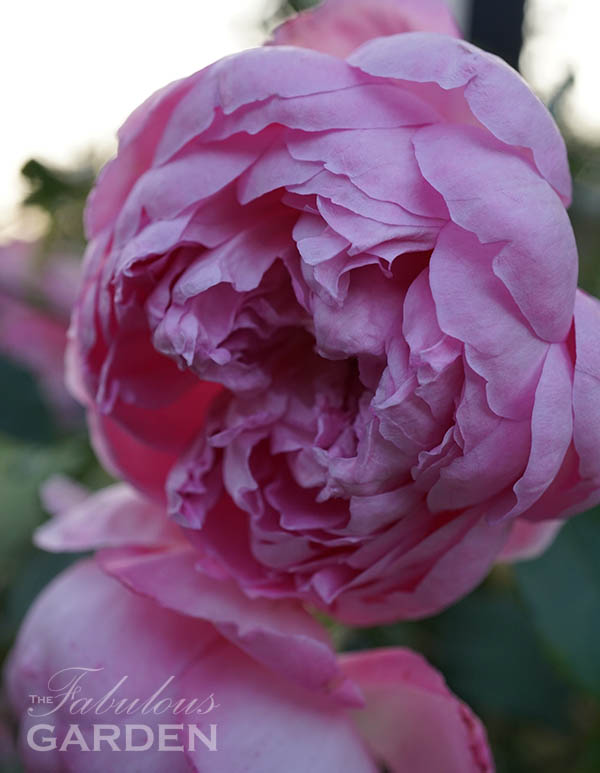 Because I deadheaded my roses all summer, they’re continuing to bloom. They’re pretty hardy plants–I usually have a few blooms even after the first few frosts. Some years even into mid December! This English rose is named “The Ingenious Mr. Fairchild”. 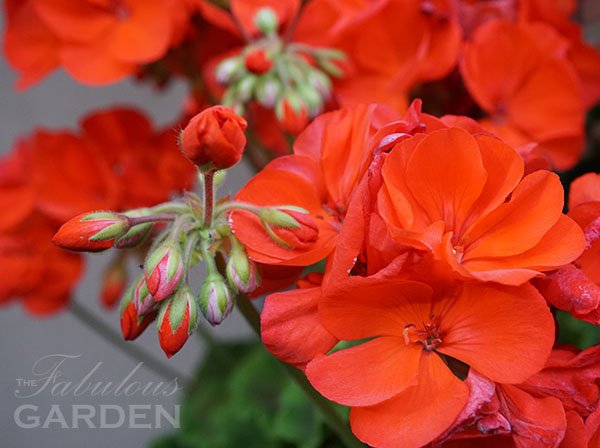 Geraniums (zonal pelargoniums) are another hardy flower that can take some frost. They’re annual plants but aren’t among the early ones to succumb to the cold. As you can see by all the buds, this one has plans to keep blooming for quite some time! 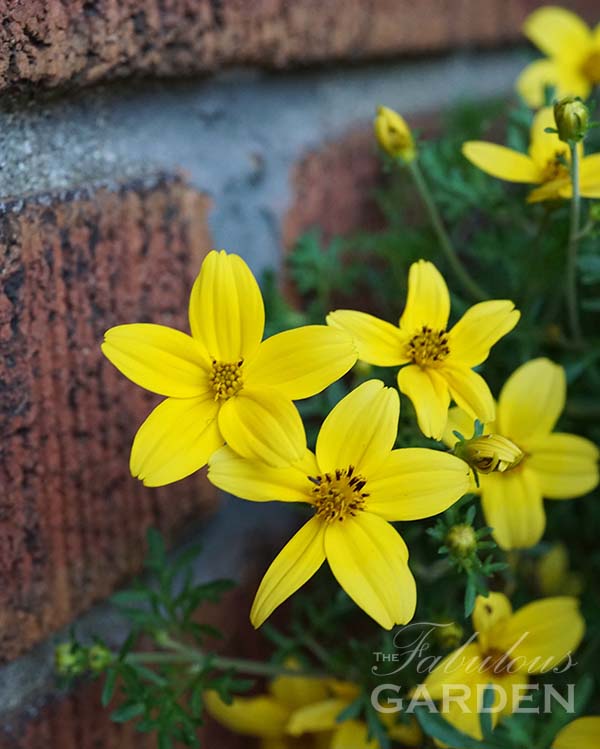 Bidens is one of my absolute favourite flowers for planters and baskets. I love it’s clear yellow flowers and the way it spills over the edges. It’s considered an annual plant in my area. 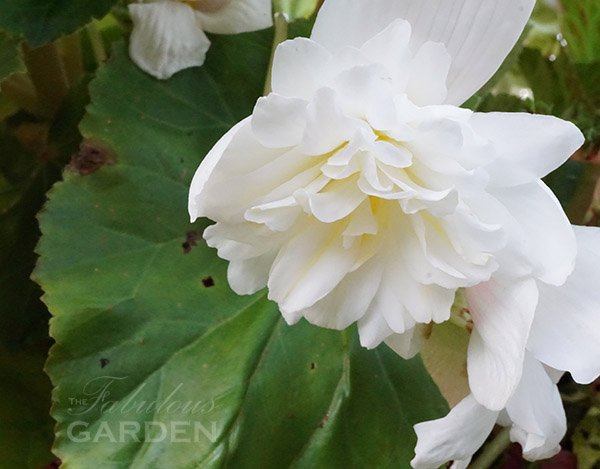 The begonias I planted as tubers inside in the spring haven’t stopped blooming since early summer. Once they’re hit by frost I’ll be digging them up to store them for the fall (instructions here). 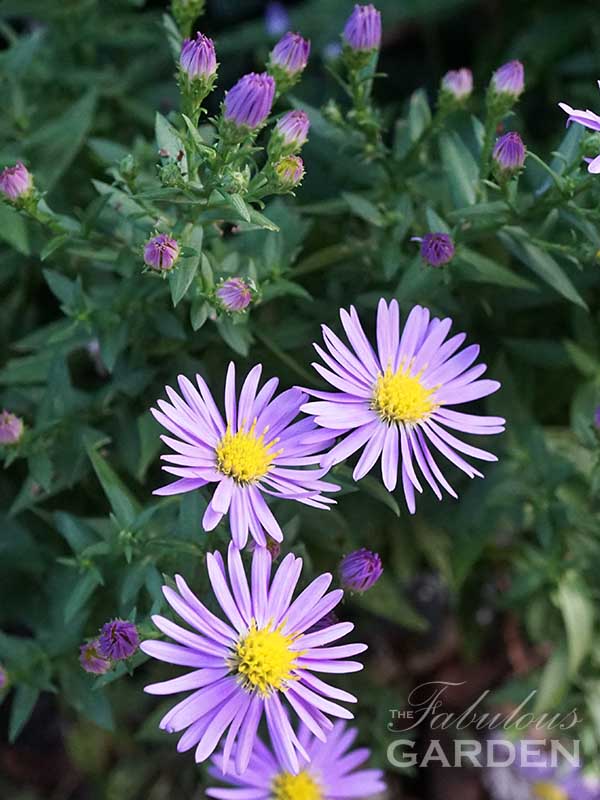 These purple fall blooming asters have tiny flowers (less than an inch across) but there are lots of  them so they make quite an impact. They’re perennial plants that don’t have any flowers until fall. 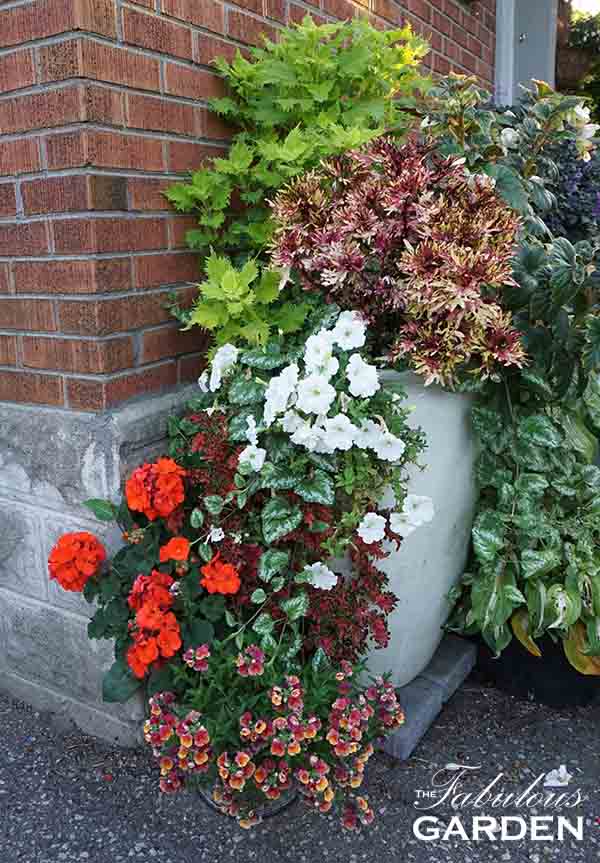 The plants in this group of planters has been putting on an amazing show since mid-summer. I kept the coleus from getting leggy by pinching it back every few weeks. There are three varieties of coleus in this picture, all three of which I’ll be trying to keep over the winter. 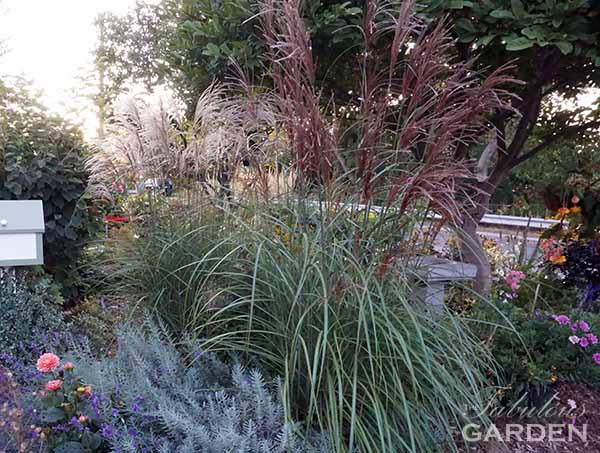 Grasses really come into their own in fall, when the plumes open. This variety is Miscanthus ‘Morning Light’. I’ve found it to be pretty well behaved, for a grass–some varieties spread aggressively and don’t belong in a small garden. 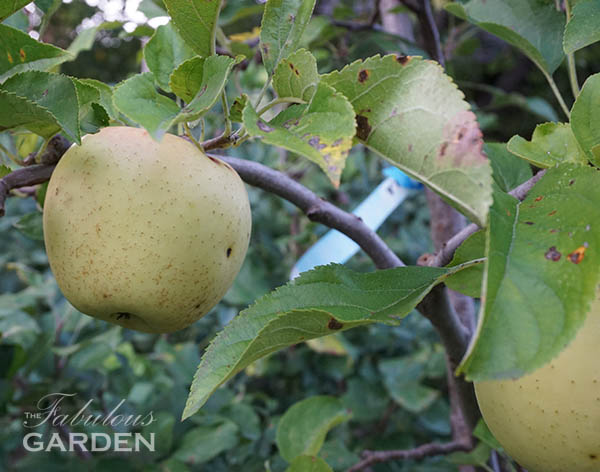 This is the second year for this apple tree and the first that we’ve actually had apples make it all the way to harvest time! There aren’t a lot of them, but it’s a good start! 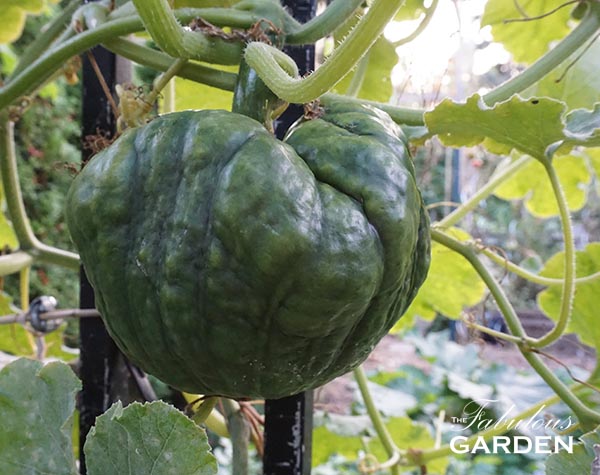 I have one pumpkin on my pumpkin plant. This variety is Curcurbita maxima ‘Triamble‘. It will be light blue in colour once it’s ripe. The flesh inside is bright orange, like a “typical” pumpkin but very dry, so it’s excellent for cooking with. Like most pumpkins, it wants to ramble everywhere and take up a lot of real estate–I’ve managed to train it up a trellis. 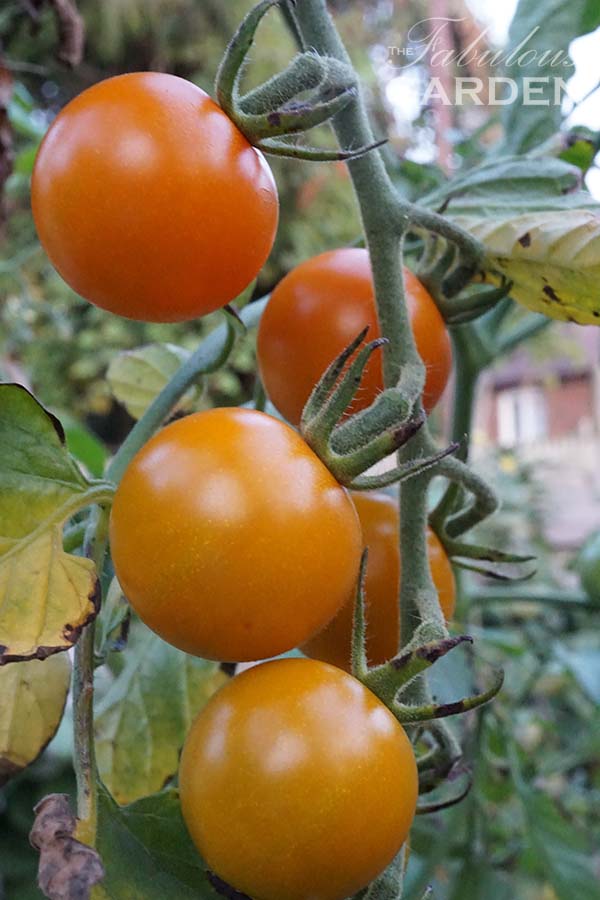 Despite a bad year for tomato diseases in my garden, I still have tomatoes developing and ripening. These cherry tomatoes are the variety ‘Sungold’ and they’re delicious! 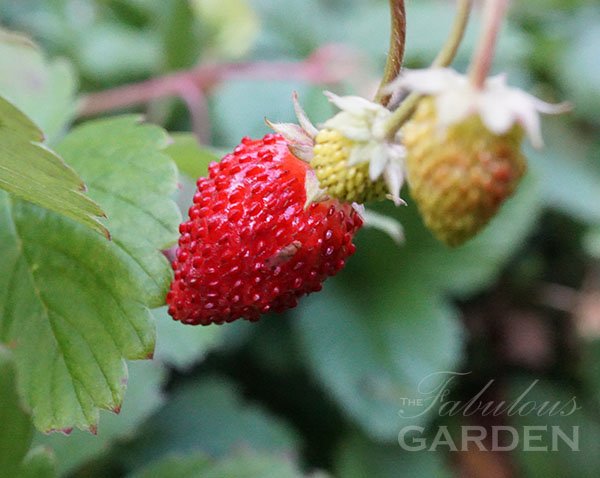 People usually think that strawberries only fruit in early summer but I have an alpine variety that produces right until frost. The berries are very small (it takes quite a number of them to make a handful!) but have concentrated flavour, similar to the wild strawberries I used to pick as a kid.

So that’s what’s happening in my garden this week! We’ve had a very warm September, so that has certainly helped keep a summer-like level of bloom activity, but instead of having to worry about protecting my plants from frost, I’ve had to be diligent in watering!

But I’m not complaining. I’ll enjoy the blooms while they last! 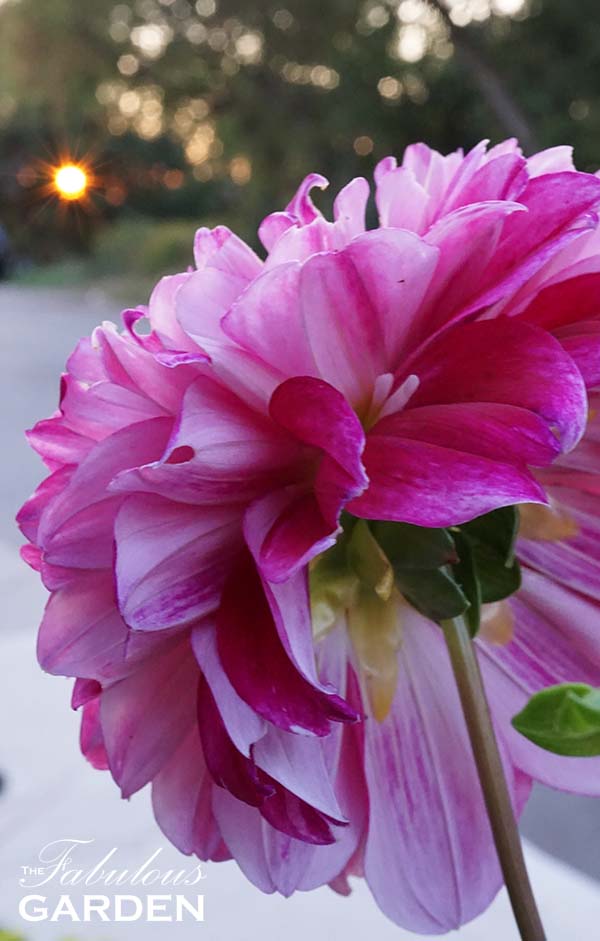