“What is that? I love it!” is one of the most common phrases I hear when people walk by my front garden. The object of their affection is Colocasia esculenta ‘Black Coral’, or more specifically, the gigantic leaves of this plant. The common name for Colocasia is “Elephant Ears” and that is certainly an excellent description of this variety! 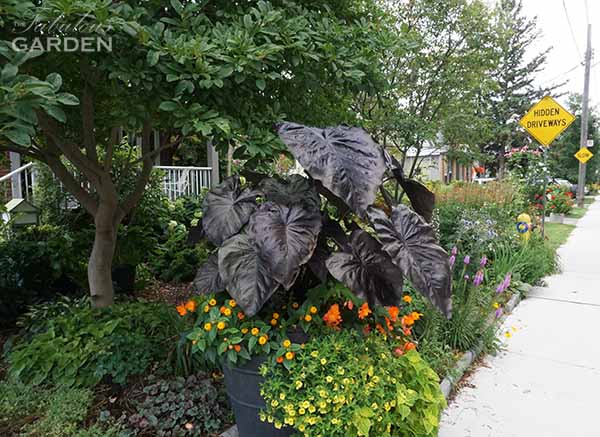 With glossy dark purple leaves that can measure more than a foot and a half across and two feet long, Colocasia ‘Black Coral’ is the kind of plant that stops you in your tracks. 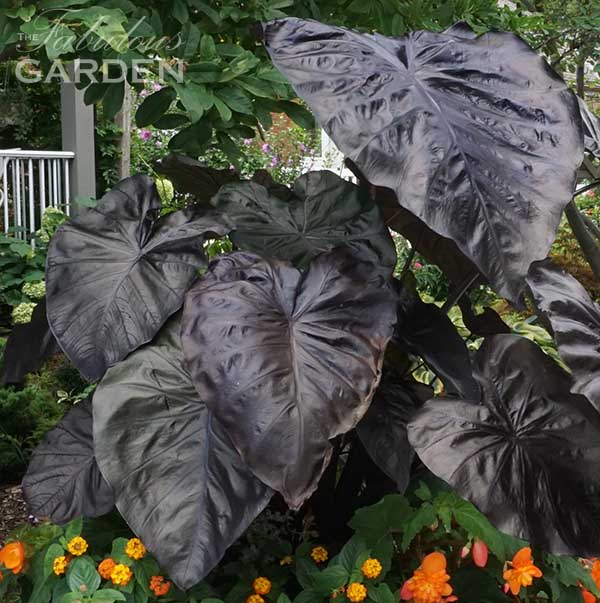 There are hundreds of varieties of colocasias and most have a large tuber (fleshy root) growing below the surface. The tubers of some varieties can be cooked and eaten–they are known as taro.

Colocasias are related to alocasias, but they are different plants and like different growing conditions. Colocasias like to be planted in rich soil in full sun and need lots of water. In fact, unlike most plants that don’t do well if their roots are wet, they can even grow in boggy conditions or on the edge of a pond. Expert growers say “more water + more nutrients = more elephant ear.”

Many Colocasias have green leaves, but breeders have been working their magic and creating more and more dark leaved plants. Colocasia Black Coral is among the darkest. When the leaves first emerge they can appear a bit green, but they develop a deep purple hue quite quickly. My understanding is that the more direct sun they receive, the darker they get. 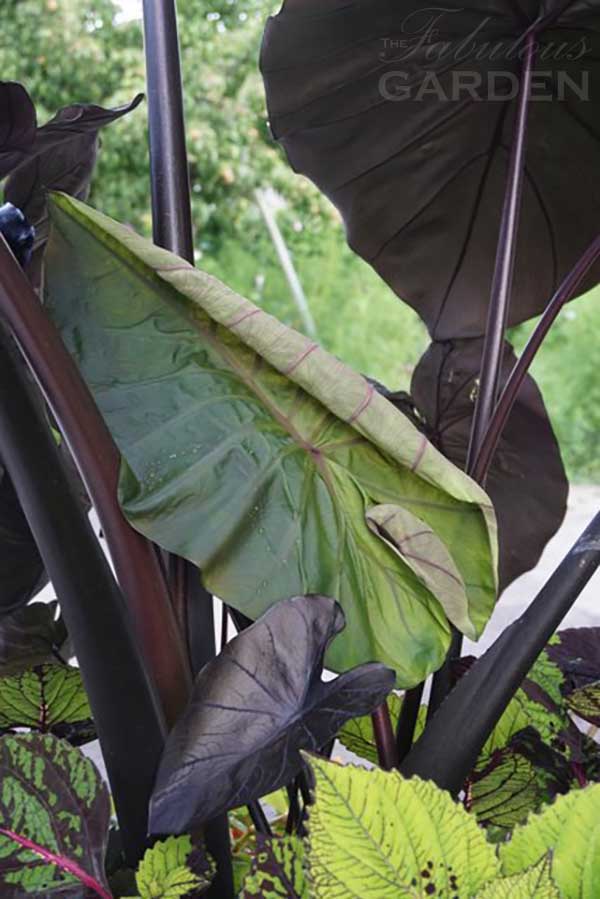 Colocasias are tender tropical plants and will not tolerate any frost. When grown in areas where the temperature gets below freezing the tubers must be lifted and brought inside for the winter.

I first saw Colocasia ‘Black Coral’ growing at a nursery in Niagara (about 1.5 hours away from where I live) in May 2018. It was an amazing looking plant but there wasn’t enough room in our car to fit it and all of the other plants I had fallen in love with. However, I made a special trip back to that nursery in April 2019 and put the pot of colocasia in my cart first–I wasn’t going to leave it behind twice! It had about 5 leaves and was $45. It was in a pot about 20″ across, with a few “filler” annuals planted with it.

I kept it in my garage, bringing it out into the sun on warm days, until late May when I transplanted it into a large planter pot right by the sidewalk. It didn’t take long for it to settle in and start growing…and growing!

Soon it became a garden feature and I started to get asked about it by neighbours walking by. The more the summer went on the bigger it got, and then people started slowing their cars as they went by to have a look. One day, a young couple knocked on my door to ask about it.

As fall approached I started to research how to overwinter this showstopper. Colocasias grow from tubers (big fleshy roots) is what every website said. Ok, so it grows like a dahlia, I get it.

In October I set out to lift the tubers. I put a large shovel into the pot and leveraged up to pop the plant loose, then plunged my hands into the soil to feel around and gently lift up the fleshy tubers.

But I couldn’t find any tubers! I started pulling out soil and digging like a squirrel looking for a nut, but all I could find under this gigantic plan were a bunch of fibrous roots (i.e. long spindly roots). Where were the tubers? 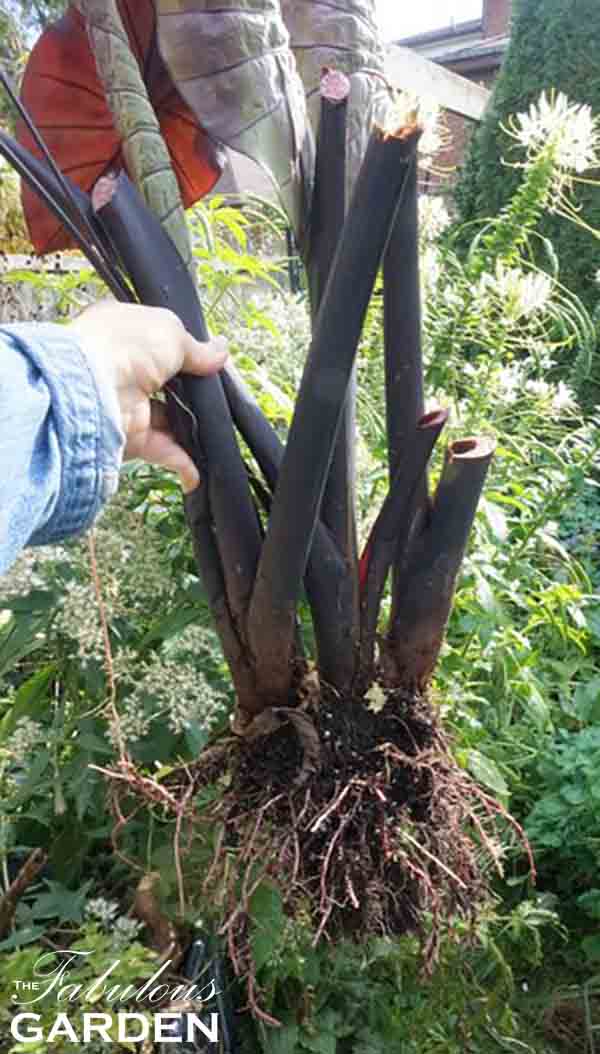 Huh. Perplexed, I searched the internet again and kept getting the same answers. As ‘Black Coral’ Colocasia was a new variety, I couldn’t find any pictures of its tubers and descriptions were vague.

I finally figured out, through the process of elimination, that the tubers for this variety must be the base of the stem, where it joined the fleshy roots. I trimmed off the excess stems and roots, and put what I assumed to be the tubers into a cardboard box filled with wood shavings (pet bedding) and placed the whole thing in a cool storage area for the winter. The stems were really fleshy and juicy; I fully expected the whole thing to rot over the winter, but I wasn’t sure what else to do.

Spring 2020 arrived and I pulled the cardboard box out. The Colocasia tuber wasn’t rotten, but it was very shriveled and dry. I was just grateful it wasn’t a slimy, stinky mess! I put the tuber in a pot with some soil, watered it and the darn thing actually sprouted! It grew and thrived all through the summer of 2020, gaining admiring comments from the throngs of people out walking in the neighbourhood that summer.

I dug it up and stored it again that fall and then planted it out this spring. It’s still planted in the same spot by the sidewalk and almost daily, from my favourite spot on the front porch, I spot someone taking a picture of the plant, or taking a selfie of themselves with one of the big leaves. It’s become a neighbourhood conversation piece; I’m so glad I made the drive back to Niagara to buy it!

How to Overwinter Colocasia Black Coral

In the fall, once the weather turns, but before there is a hard frost, cut the leaves off the plant, leaving about 12″ of stem. Dig the whole thing out of the soil. 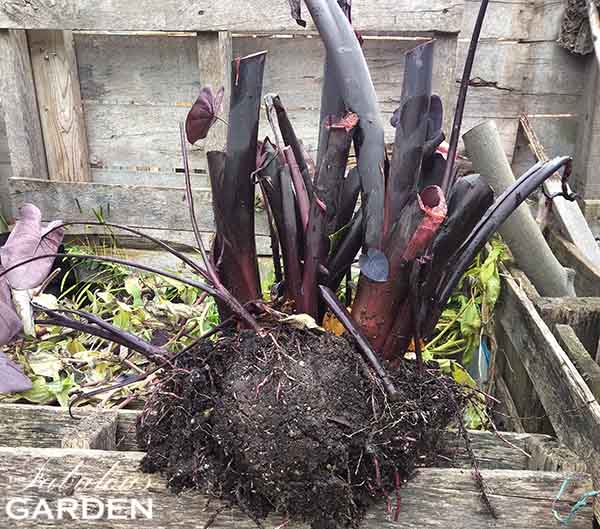 I took these photos at my compost bin (which is made out of discarded pallets). It’s a handy spot to do this kind of work, as all of the trimmings can go right into the compost. 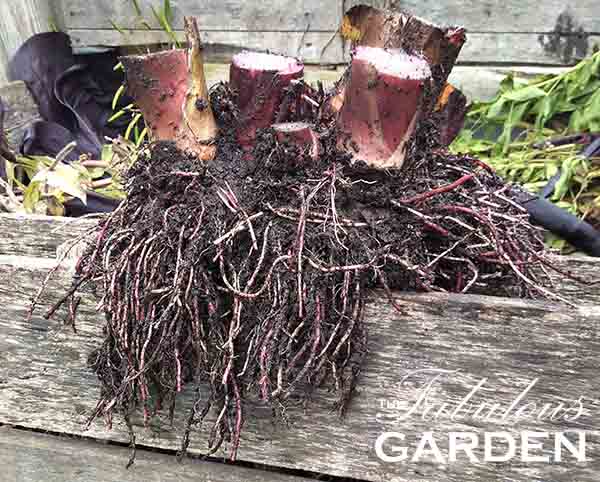 If you have a big clump of stems and roots, you can gently separate out one or more sections. Smaller pieces are easier to fit in a pot in the spring. 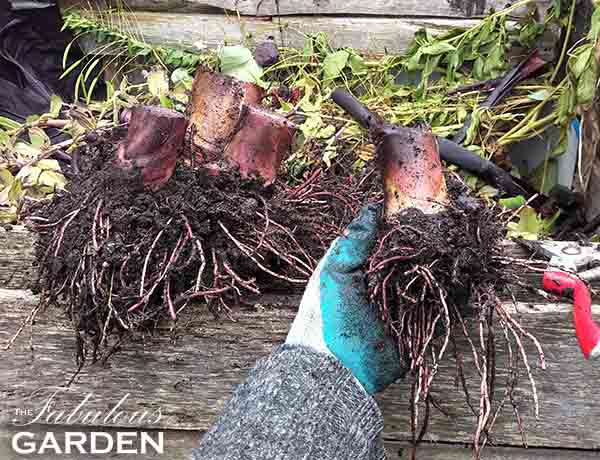 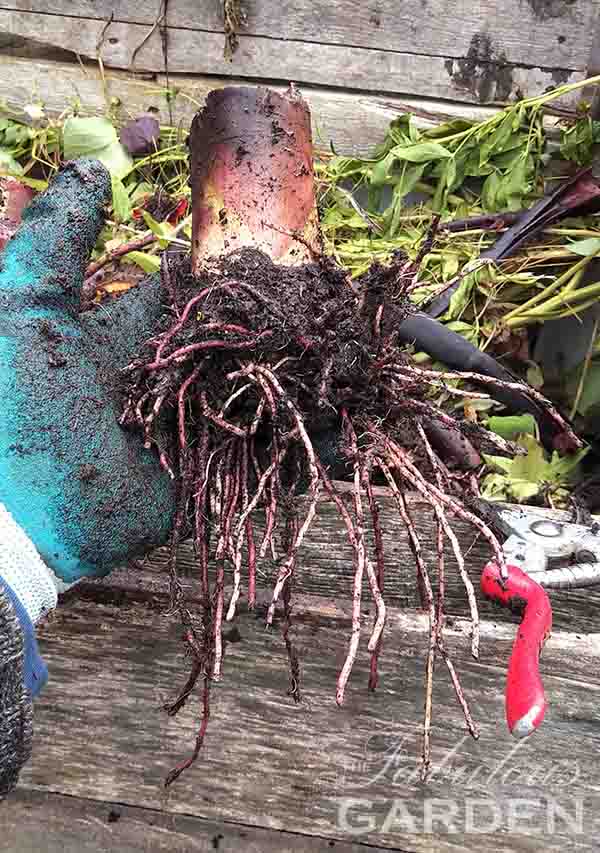 You can trim the fibrous roots back a bit–they will disintegrate over the winter so they’re not necessary, but leaving them won’t hurt anything.

Place the tuber into a cardboard box filled with wood shavings (I use the kind sold as bedding for pet rabbits) and put the box somewhere dark and cool, but not below freezing. If you have a cold cellar or a heated garage that’s ideal. I store mine in the coolest part of our basement, in a cupboard that abuts an outdoor wall.

Check on it every couple months to make sure it hasn’t started to sprout. It will start to sprout if your storage area is too warm. Good luck if that happens in early winter, as your only real option, besides composting the sprouted tuber, is to plant it in a pot and try to keep it alive until spring, by which time it could be very, very large.

How to Grow Colocasia ‘Black Coral’ From a Tuber

Pull your tubers out of storage. Don’t worry if they don’t look too promising. 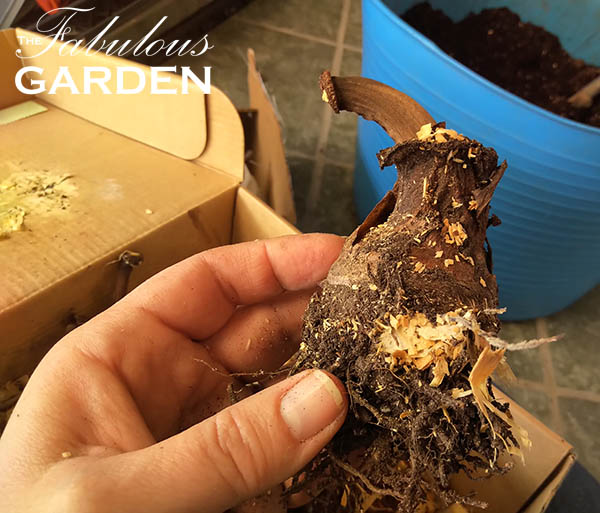 Same tuber as above, late February 2021.

Plant the tuber in a pot filled with potting soil (potting compost for our UK friends), water, and place in a bright spot. I put mine on my plant stand with my tomato seedlings, under LED lights that run 16 hours a day. I don’t use any fancy grow lights, these are just standard “shop lights”.

Wait, keeping the soil damp but not wet, and in a few weeks shoots will start to appear out of the tuber. 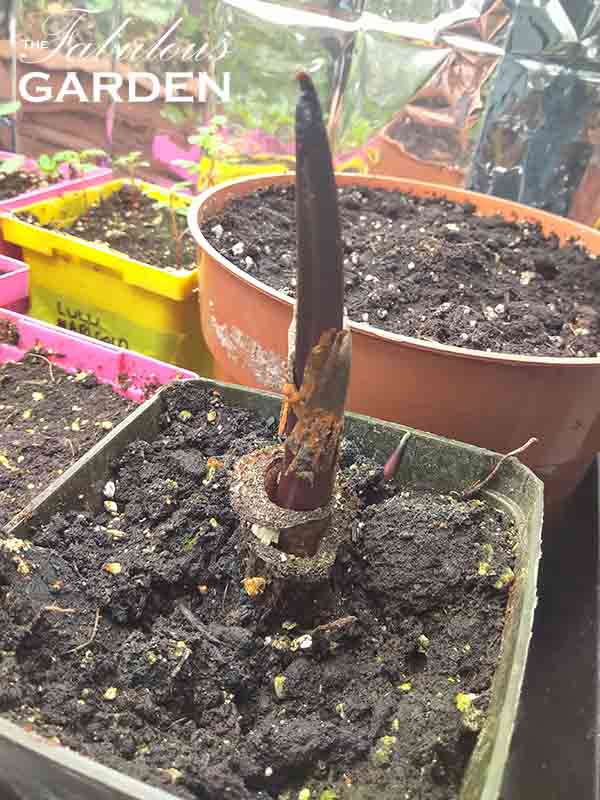 Leaves will emerge and you’re off to the races! Keep the plant well watered, moving up to a larger size pot as needed. Note: it’s better to keep moving up pot sizes gradually, rather than putting the plant into a too large pot right away. I repotted mine twice before planting outside.

When you’re ready to plant it outside, pick a sunny location. If you’re going to grow it in a pot, get a really big pot so the roots have room to run, and ensure that you use a rich potting soil. I like to mix in a slow release fertilizer. If you’re going to plant it in the ground, make sure it is not in too dry of a spot (e.g. in sandy soil next to a thirsty tree), and add compost or composted manure to the soil.

Keep it well watered and fertilize as needed. 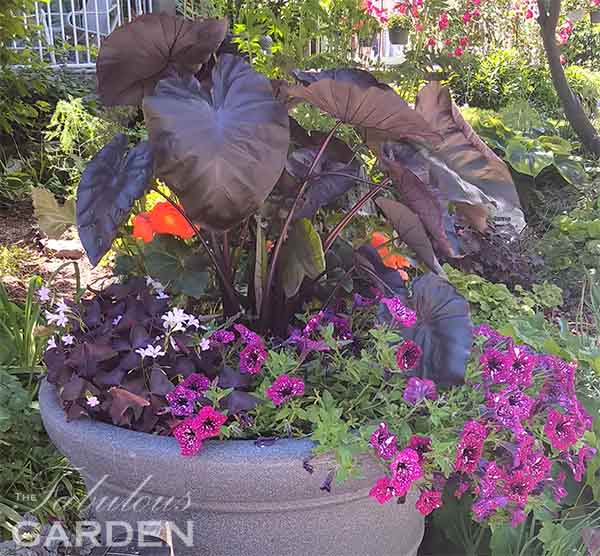 June 2021, not long after being planted out. 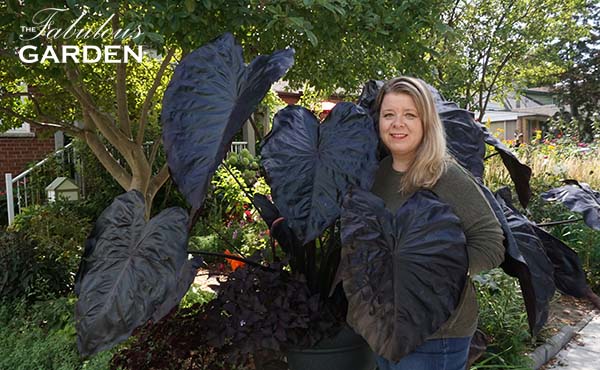 A Warning About Wind

Be aware that in strong winds those big leaves will act like sails. So if you’re going to grow it in a big pot, put something heavy in the bottom of the pot–mine is half full of concrete pieces–so that it doesn’t blow over.

I have also learned, the hard way, that if any of the plant’s stems get bent over by the wind (or by vandals) your best bet is to cut them off and make room for fresh leaves to grow. If you try to stake the bent leaf up it will not recover, and the other leaves of the plant are likely to be shredded as they bash against the stake in the wind. Cut your losses and cut the leaf off.

However, the leaves of this Colocasia are very resilient. Significant wind storms can cause damage, but in three years of growing it, I’ve never lost more than 5 leaves in a big storm.

Colocasia ‘Black Coral’ does get flowers, but the form is a spathe and they’re really not much to look at. This photo is the most beautiful of any of the flowers that my plant developed over the years: 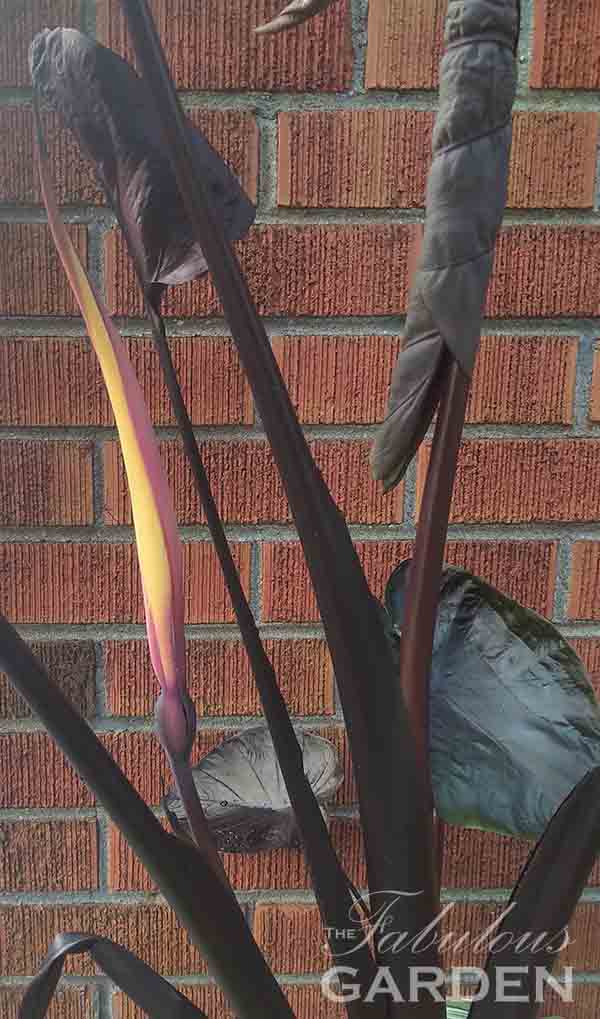 Nice colouring but it didn’t open any more beyond this, or get any more colour to it. It just shrivelled up and died off. Flowers that received less sun (i.e. were deeper under big leaves) weren’t even as vibrant as this.