Dahlias have spectacular blooms but are very easy to grow. You can buy plants already started from the nursery in late spring, but for the best selection I recommend buying the tubers (i.e. the fleshy roots of dahlia plants–they’re like tulip bulbs) now and starting them growing indoors so that they are ready to bloom by mid summer. If you wait until it’s warm enough outside to plant tubers it will be late fall before they even consider blooming.

I wrote a post last year on how to lift and store your dahlia, canna and begonia tubers over the winter. Today’s post will explain what you do with those tubers now or what you do with brand new dahlias you just invested in (plant-a-holic tip: you can say you invested in dahlia tubers because they’re not just here for a year and gone–they will last year after year and multiply if you take care of them).

I picked up three new dahlia tubers from my favourite nursery last weekend–two varieties with smaller blooms and one with giant or dinnerplate-sized blooms. Even though they’re all dahlias you’ll see in the following pictures that their tubers of each variety are each shaped a bit differently. The only thing this affects is the size/shape of the pot you can plant them in.

I like to start my tubers in a shallow pan filled with potting soil that I then place under my grow lights. The pan has drainage holes in the bottom–that’s important because you could easily rot your tubers if you keep them in wet, not damp, conditions.

Starting tubers in a pan enables me to maximize the limited space under my flourescent grow lights. I do transplant them into their own individual pots once they get going (by then I’ll have more space under the lights, as some of my other plants will have moved out to my cold frame. But that’s another story.) You can certainly plant your tubers in a regular plant pot, just make sure it has drainage holes in the bottom. If you don’t have grow lights you’ll need a spot for them on a really sunny windowsill. 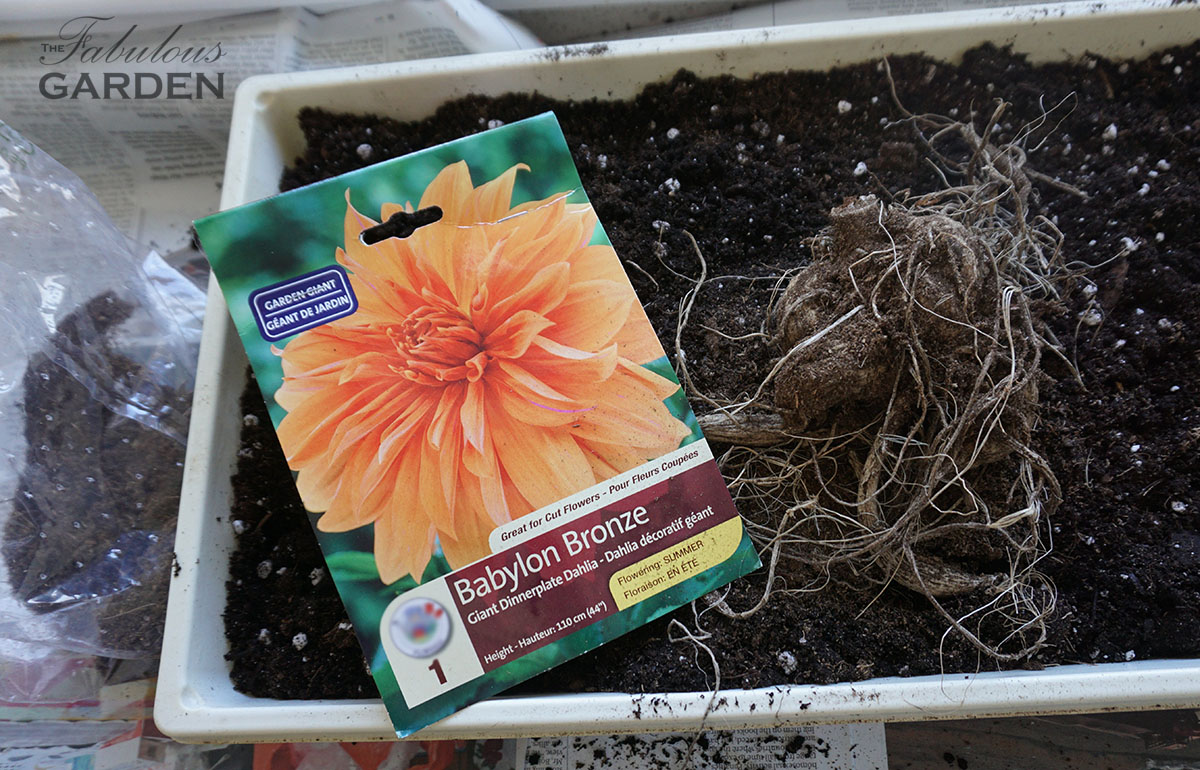 When I took my first dahlia out of the package it was covered in a lot of thin, dried up feeder roots. These are dead and aren’t ever going to perk back up so you can trim them off if you wish, but you don’t have to. This is what it looked like after I trimmed mine: 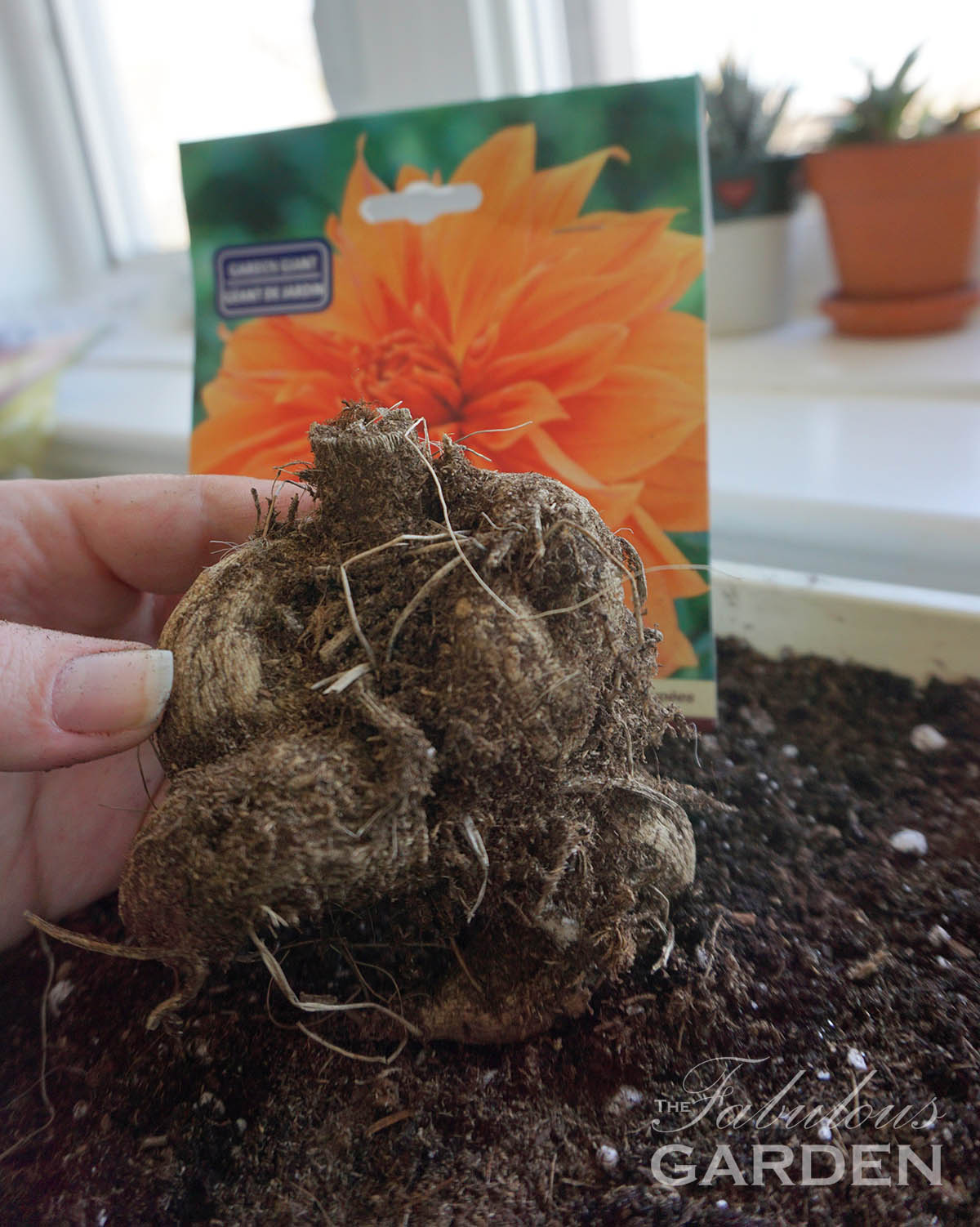 Now that the superfluous roots are gone, you can see that the shape of this tuber is a tight clump, almost like a fist. Notice how different it is from this other tuber: 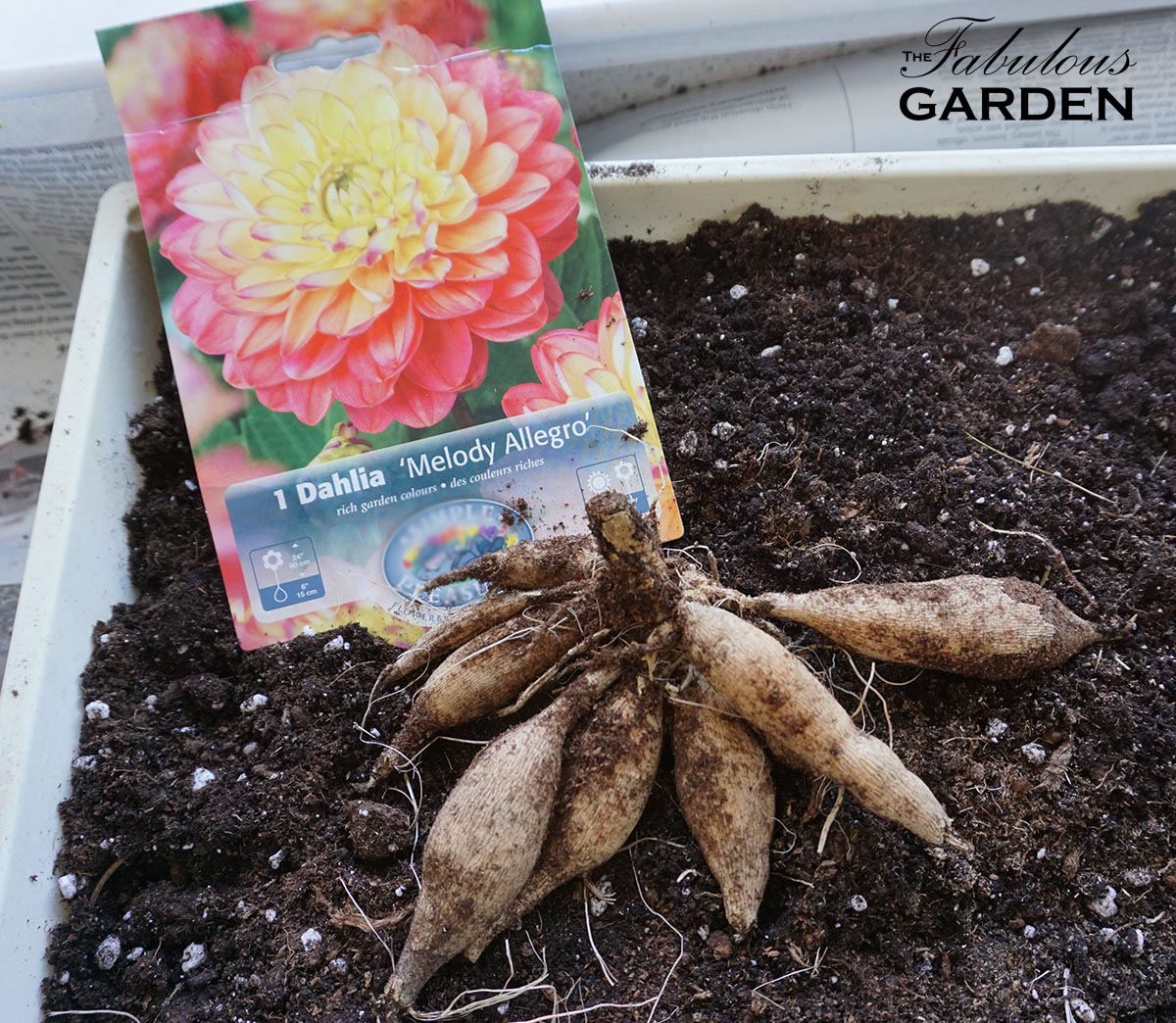 Both are good tubers, they’re just different. On both shapes you can see, sticking out from the middle, a piece of the dried out stem from last year–this is “up” when you’re planting.

Especially if you’ve never planted dahlias before, you should plant your purchased tuber as a single unit–do not try to detach all of the little tubers thinking that you’ll get multiple plants. That’s not how it works. It is possible to get more than one dahlia plant out of a tuber, but understand that they sprout near the stem, and not every little tuber will actually sprout. I plant mine whole and then, once they’ve sprouted in the tray, I may choose to carefully divide the clump with a sharp large knife. But I only do so if I see a good spot do so–they don’t always sprout in a way that you can divide them without damaging the new sprouts.

In the following image I show you the three very complicated steps you need to follow to plant dahlia tubers. Ok, here we go:

Yup, it’s that difficult. Lay the tubers out, stem side up, in some damp potting soil, cover them up, and wait. Kind of hard to go wrong. Do you see why I love dahlias?

For the next couple weeks I will keep the soil damp but not wet and ensure they get 8+ hours of light every day. Eventually they will send up little sprouts. When the plants are well established(ie have good roots) I will transplant them into bigger pots and eventually, once the weather warms up and there is no danger of frost, I will plant them outside. Some will go in the ground and some will go in planters. They’ll all be covered in spectacular blooms from late summer until frost (unless the earwigs get to them. But that’s another story and another battle.)

If you’ve never grown dahlias before but you’d like to give it a try you need to go out and buy yourself some tubers. I’d suggest you not just buy the one with the prettiest picture of a bloom, but also consider how big the plant itself will get.

In the following photo, from left to right, the package shows the size of the tuber (it’s a No. 1–not especially helpful information) and then the expected height of the plant from ground level to the top of the flower–this particular one will grow to 110 cm or 44″ tall. I have a spot for a plant that tall in my garden, so that’s great. If you were looking for a shorter plant (eg. to grow in a small pot or for the front of a flower border) you’d want to consider a different dahlia.

The next diagram on the package shows how deep and far apart to plant the tubers–we’re not too concerned about depth but take note of the width because that will give you a hint as to how wide the plant is going to be. After that we can see that the package says they need to be grown in full sun (that’s 6 or more hours of direct sunlight. Any less and you won’t have many flowers, just a lot of leaves). The last diagram is a calendar suggesting when to plant them and when to expect them to bloom–I find that information so general as to be useless so I don’t worry about it.

So that’s what you need to know about buying and starting dahlias. I’ve planted my three new tubers and I’m very excited to watch them grow and bloom. 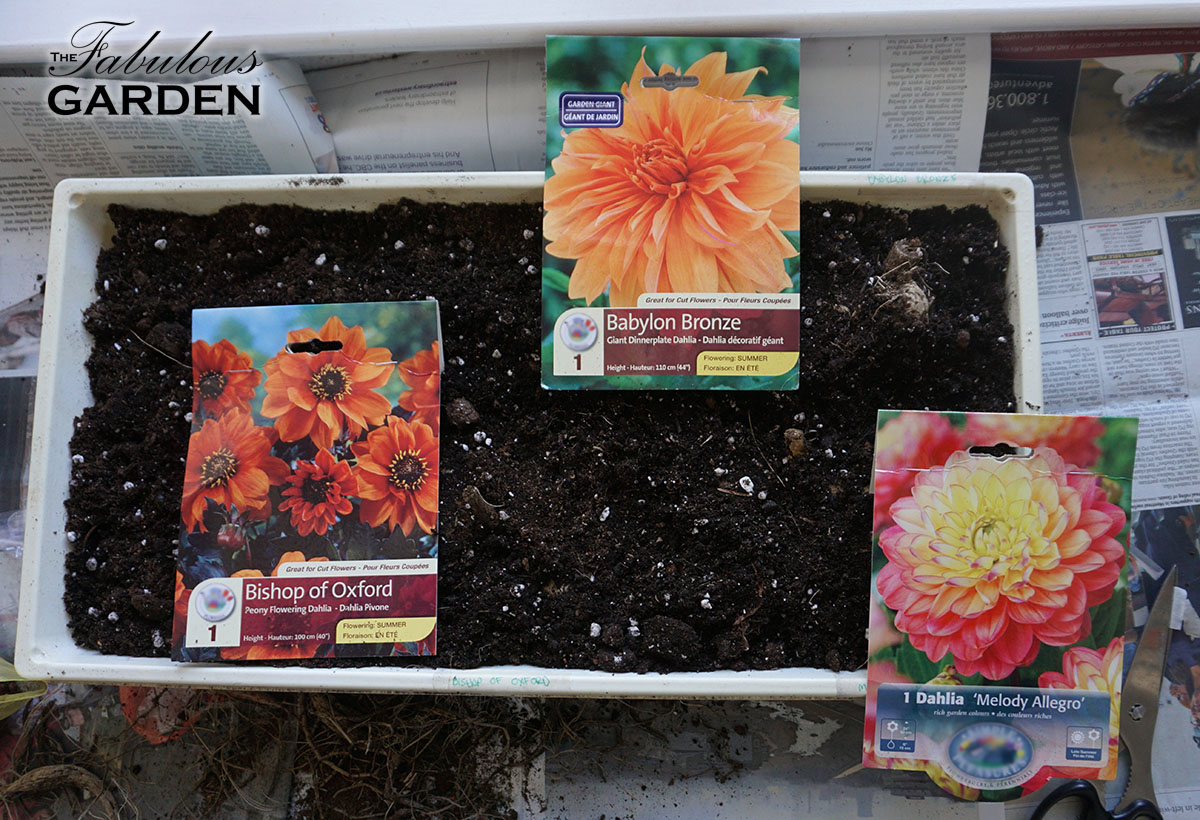 Now I have to pull the dahlia, canna and begonia tubers I saved from last year out of cold storage, and get them into some soil. I’ll follow the exact same process as above for all of them (dahlias, cannas and begonias), although I will be sure to plant my begonia tubers with the bumpy side up and smoother side down (the stems grow out of the bumpy part, and the roots out of the smoother part).

I hope this post has inspired you to get growing yourself. If you’ve ever grown dahlias I’d love to hear about in the comments below, especially if you have any tips on growing them of if you have any favourite varieties.

← Will late snow and ice harm my spring bulbs?7 Garden Tasks for the Pre-Season →