I noticed an empty open spot at the front of our garden, near the sidewalk. Bare soil (or bare mulch) is a rarity in my garden, by design. Actually, saying it’s by design sounds like have a plan—if there’s an empty space I see an opportunity to cram in another plant!

I still have a few pots of various annuals sitting around that I haven’t planted yet, and the exuberant growth of many of my perennials means I can easily dig up a shovel full from elsewhere in the garden and migrate them to a spot in need, so my options as to what to put in that empty spot were plentiful. But what did I pick? My staple filler plant, whenever I need something to add colour, be undemanding, and do well in a wide range of sun conditions for one season—coleus!

I admit that I used to hold this plant in fairly low regard, passing over the tiny weirdly speckled plants in the cell packs, but two things made me change my perspective. The first was visiting Garden Walk Buffalo. When I saw how some of the Buffalo gardeners used coleus—giant plants, in a range of patterns, with one variety to a pot—it opened my eyes to the possibilities: 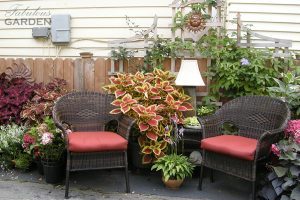 Coleus steals the show in this seating arrangement. How many varieties do you see? 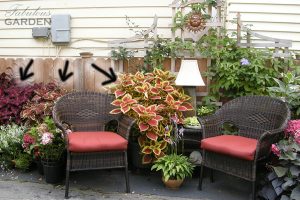 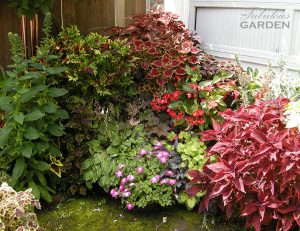 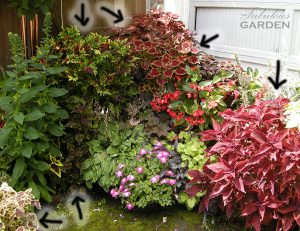 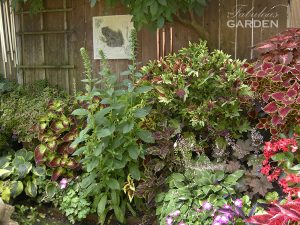 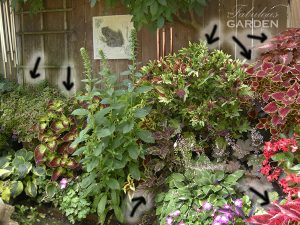 The second was encountering Coleus Ruffles Copper when I used to volunteer as a container planter at Canada Blooms (the huge Toronto flower and garden show held every March). Every year, staged throughout the aisles of the show, were about 20 large planters (roughly 3’ x 3’ across), plus another dozen or two even larger planters. I liked the 3’ x 3’ planters best as their plantings were all composed in pairs or individually—whereas the other couple dozen planters were supposed to all look alike (the design team figured out a formula and you planted them all the same—one dozen with this formula and one dozen with that formula).

Months ahead of the show, the Canada Blooms design team would estimate how many plants they would order in for the planters, and allocated them up based on what made sense on paper (e.g. 16 lime heuchera, 24 hot pink gerbera daisies, 16 variegated ivy, and 6 pots of pink tulips for planter #17). However, as the plants arrived we began to prep for the show, you often discovered that the combination that had been ordered might not. The pink gerberas might actually be more orange than pink in real life, and then your 6 pots of pale pink tulips would look a weird afterthought.

My very favourite part of volunteering at the show was that the horticultural director would set me loose on the planters (after dubbing me “The Planter Queen”—did I mention we had a lot of fun?!) to reallocate all of the plants and create new. Besides the formula of what had been ordered for each planter, there was always a healthy stock of “spare” plants that we either used in the planters or sold to the show exhibitors.

The first year we received a shipment of Coleus Ruffles Copper I wanted to use it everywhere. It seemed like every plant I combined it with looked better with this wonderful ruffled orange/pink/green/burgundy chameleon! 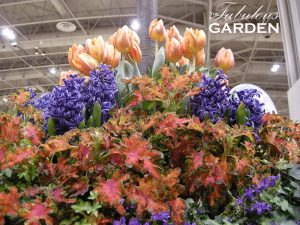 Looking up into an arrangement from Canada Blooms 2012, featuring Coleus Ruffles Copper, Tulipa ‘Princess Irene’ and an unnamed purple Hyacinth.

When spring came that year I looked for it in garden centres but couldn’t find it anywhere. But the next March there it was again at Canada Blooms—the horticultural director agreed that it was a great plant for our containers. As a thank you for volunteering that year, and because I didn’t stop raving about Ruffles Copper, she gave me one of the spare plants at the end of my last shift. I haven’t volunteered at the show for a few years now (there were some changes and my crew moved on to other things) but I kept that plant going, overwintering it indoors, making cuttings, and using it in my planters at home ever since. 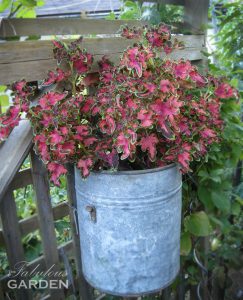 Coleus Ruffles Copper in a metal pot, hanging on an arbour in my back garden in 2015.

I’ve only seen it in a garden centre once (along with a cultivar with more pink called Coleus Ruffles Bordeaux). Why it’s not more widely stocked I don’t know.

But there are plenty of other great varieties of coleus and they play well with others. As long as the other plants you’re putting them with have leaves or blooms with one of the colours in the leaves of your coleus, they’re likely to look pretty good next to each other. Or, you can try what this Toronto gardener did–put every variety you can find together and make a real statement: 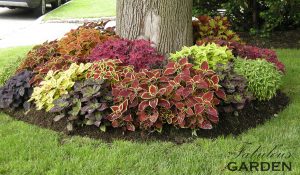 Coleus tolerates quite a bit of shade, but can handle full sun as well, as long as it’s adequately watered. Some varieties grow larger than others. There is a “Kong” series with huge leaves, on a plant that grows to about 18” tall. Coleus Wasabi has what I’d call normal sized leaves but on a very vigorous plant—it’s grown well over 2’ and become a real showstopper.

I find that coleus does better in pots than in the ground in my garden–possibly because I have so many snails (free escargot, anyone?). I’ll let you in on a secret about those Garden Walk Buffalo photos of coleus above–all of those coleus (and most of the other plants pictured) were in carefully arranged pots. That’s how they get such a great variation in height. On the other hand, the coleus in the photo just above this paragraph, from Toronto, were planted right in the garden.

Coleus is such a versatile plant. While I once ignored it I now wouldn’t want to garden without it!