I’ve written before about how much I love coleus and how I’ve had a hard time finding my favourite variety at any of my local nurseries. 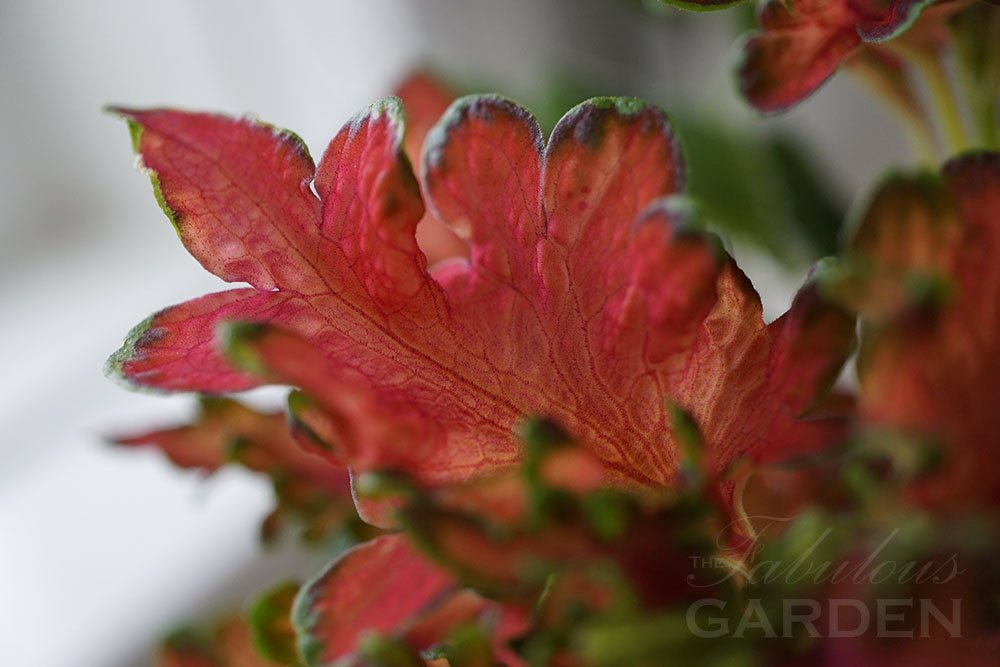 To keep growing this plant, I’ve been growing cuttings, starting with my original plant, season after season. In this post I’ll show you how I make cuttings and root them, using the technique I was taught in my college horticultural science classes.

You may have tried to make new plants by putting a piece of a favourite plant in water until it sent out roots. This sometimes works, but mostly just because plants are so determined to survive that they’ll make do with less than ideal conditions. The problem with this method is that roots that develop in water aren’t the same as roots that grow in soil–they’re more brittle and not designed for taking in nutrients from soil. When it comes time to take that water-rooted cutting and start growing it in soil the plant has to grow a whole set of new roots. With the method I’m going to show you, plants develop real roots right from the start.

You’ll need a few supplies–a tray of sharp sand (i.e. builder’s sand, not sandbox sand), a healthy coleus plant, and sharp scissors or a knife. Although they’re not essential, your success rate will be improved if you also use rooting hormone* and have a heat mat*. 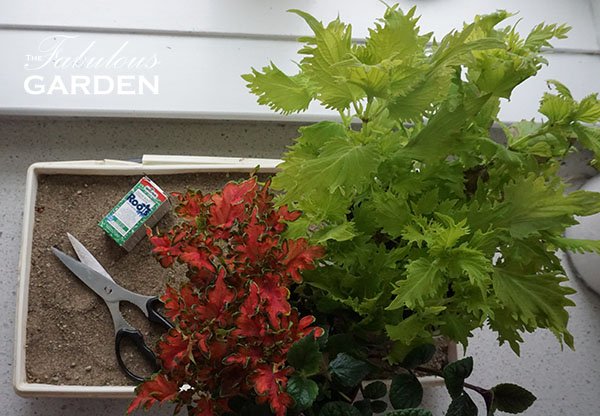 I rooted some coleus cuttings last fall, and then grew them on as houseplants over the winter. In February, I sat down to take cuttings. Because I wanted to keep the original plants as well, I was careful to take my cuttings, just above a growth node (see the dotted blue line on the image below). Even if I didn’t want to take cuttings, I would have pinched back the plant at this point on all of its stems, in order to make it bush out, keeping it from getting leggy. 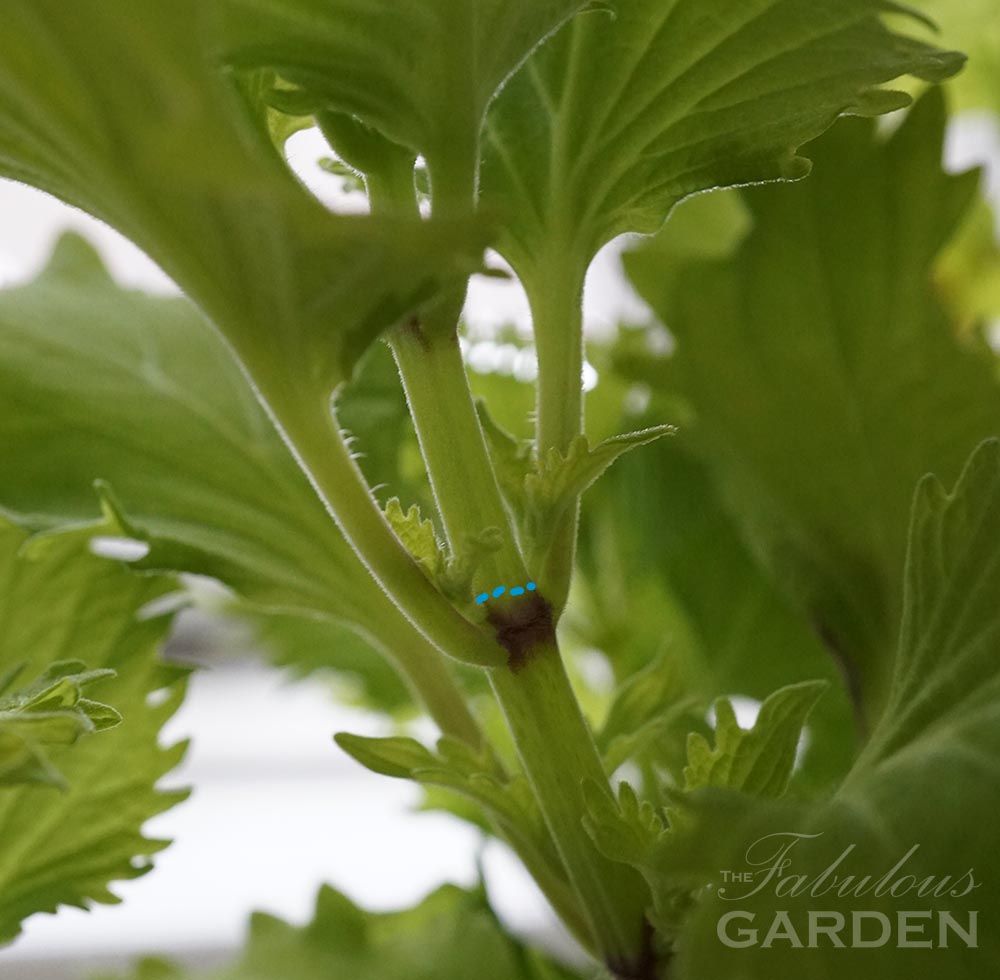 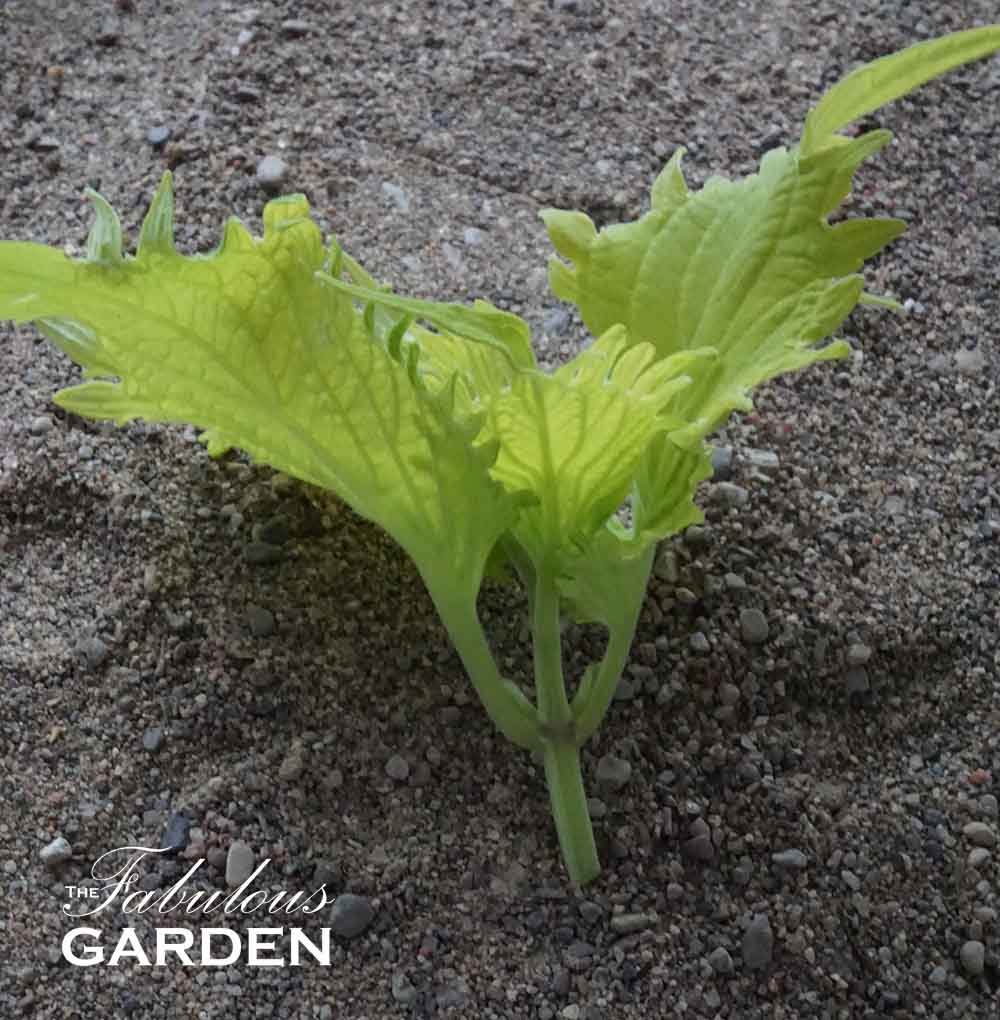 And this is what it looked like a moment later: 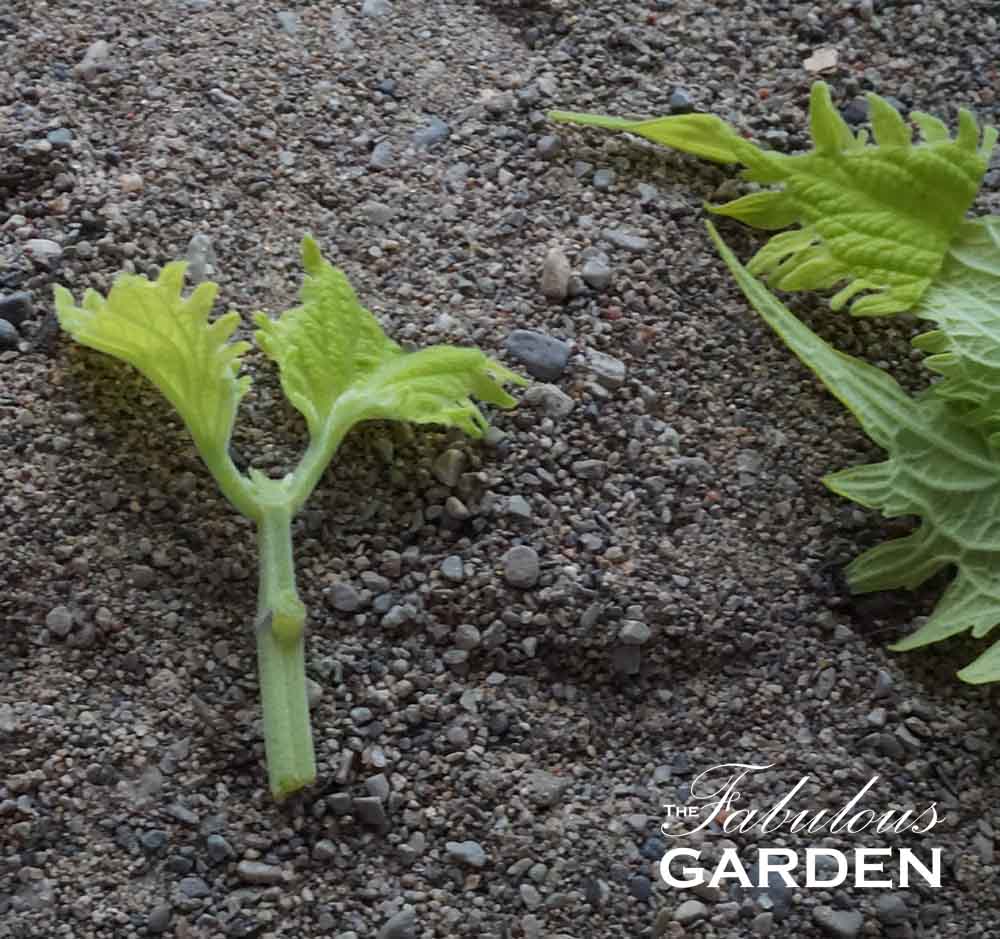 What I did was remove all of the excess leaves. This little cutting is going to need to quickly develop enough root system to support itself. If I had left all of the original foliage on it there wouldn’t be enough water coming in to sustain the cutting during the initial growth period. Not only did I pinch off all but two small leaves, I cut the ends off the leaves, to reduce the surface area even more. The idea is to leave just enough leaf area for the plant to be able to take in light and photosynthesize. 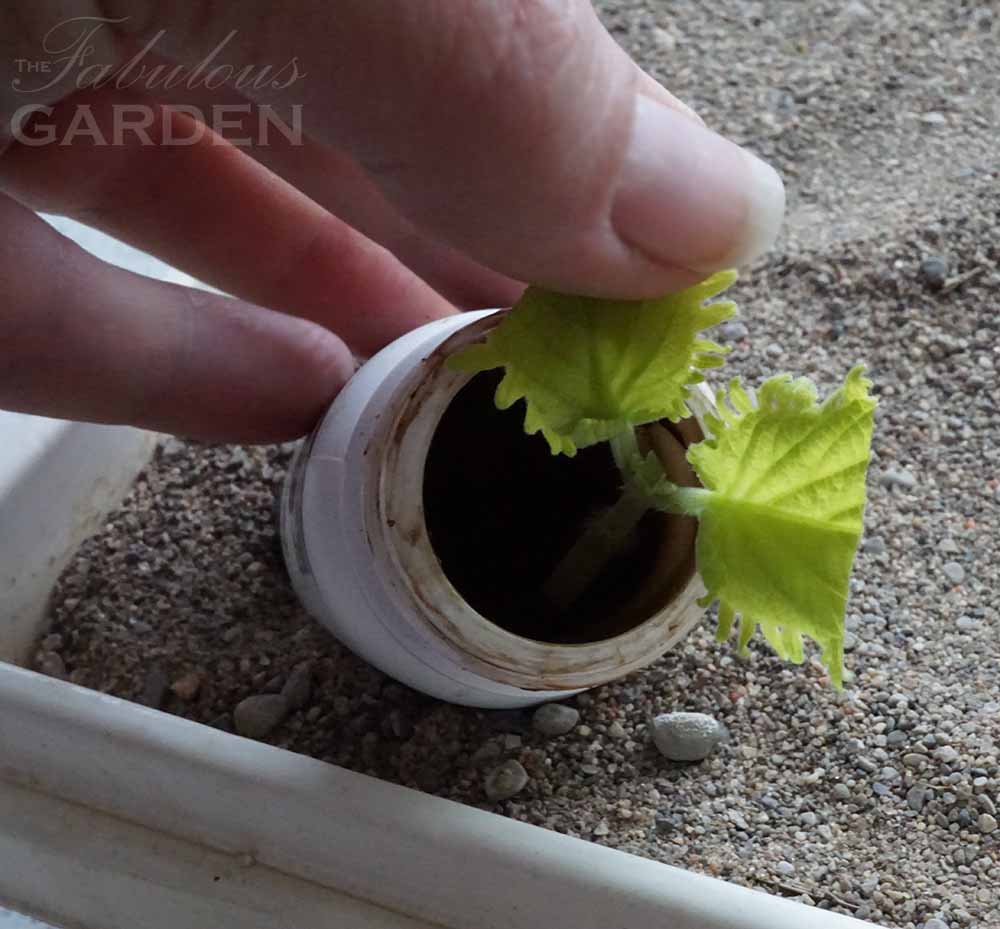 And then pushed the cutting into a tray of sand (if your sand is damp you may need to make a hole with a pencil first, then put the cutting in and fill in the hole with sand): 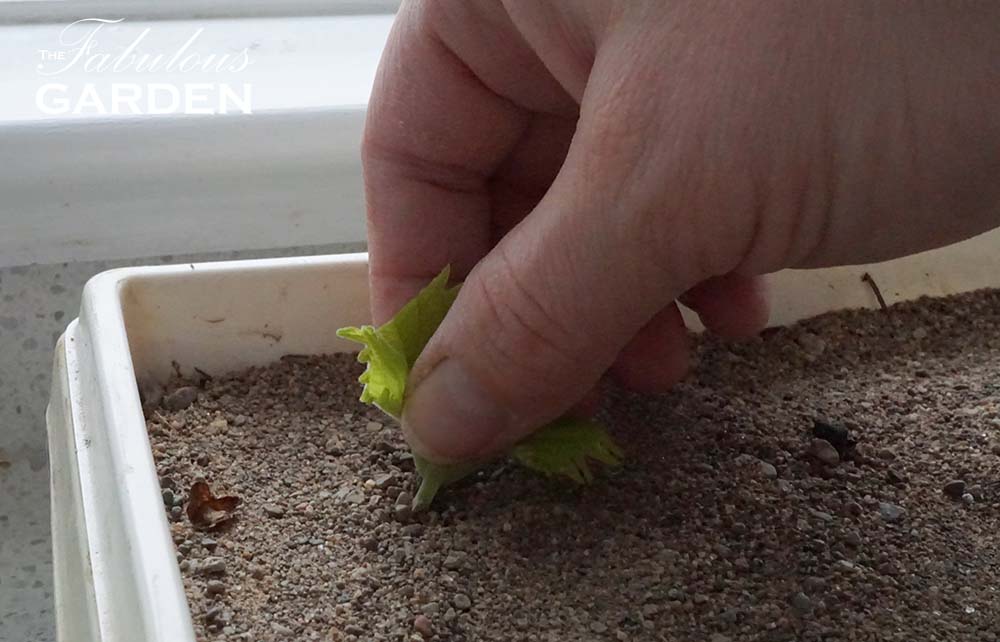 I repeated this process with more cuttings from both coleus plants, until I had a full tray. 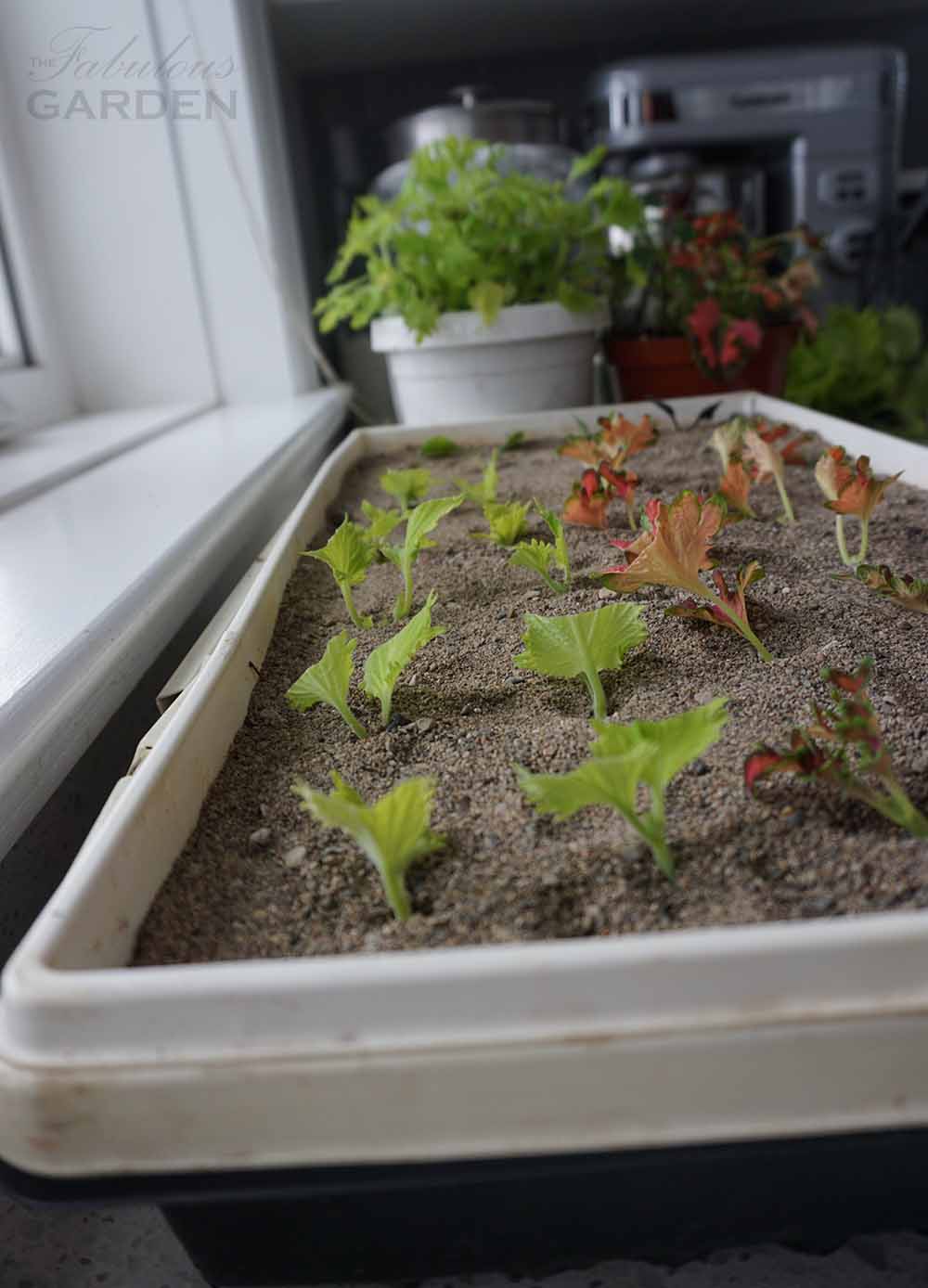 I then watered the tray so that the sand was damp and placed it under my grow lights (although a south facing windowsill could work) in the basement. Coleus cuttings seem to root faster if they get heat from below, so I placed a heat mat under them as well (i.e. a special mat, somewhat like a heating pad for humans, designed to withstand moisture and be placed under trays for seedlings or cuttings to promote growth. Heat mats are available at some garden centres and online. Do not try to use a heating pad from the drug store for this purpose).

I kept an eye on the tray, watering it regularly and ensuring that the sand never dried out. After a few weeks, new leaves started to emerge at the base of the cuttings: 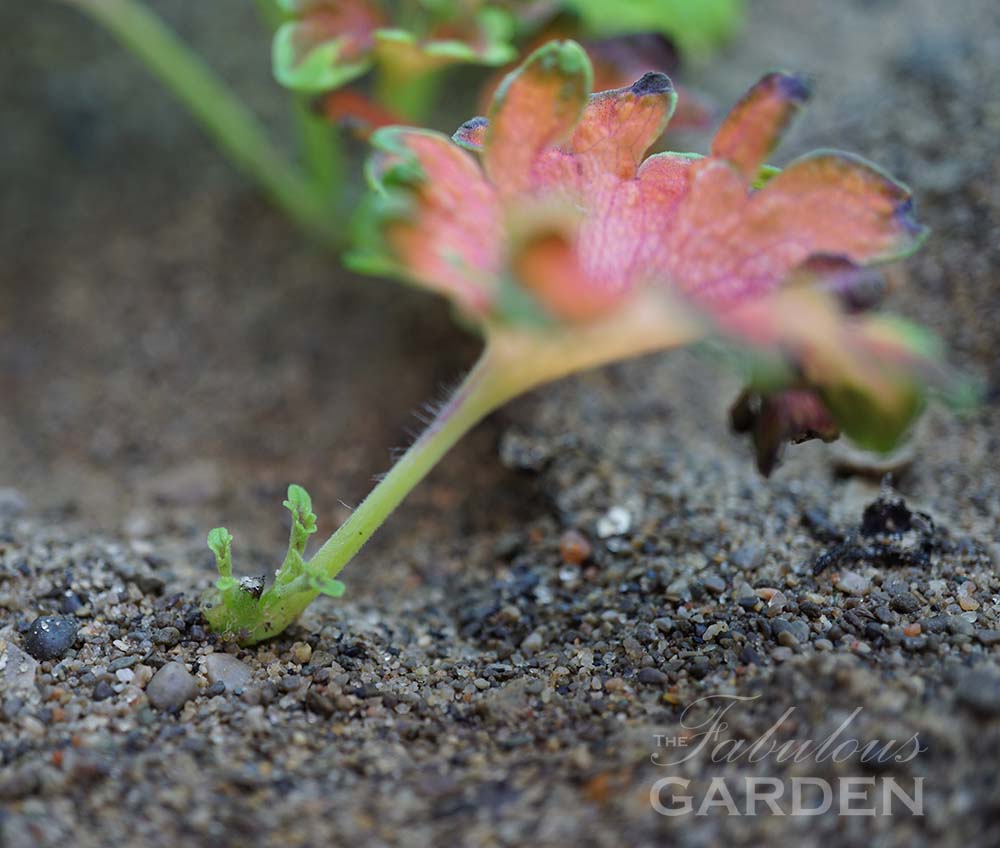 I continued to keep the sand moist and keep the trays under the grow lights. When the plants were ready a couple months later…actually, let me be truthful, when I finally had some time a couple months later (the plants had been ready long before), I used an old spoon to dig the little cuttings out of the sand. Take a look at how much root had developed: 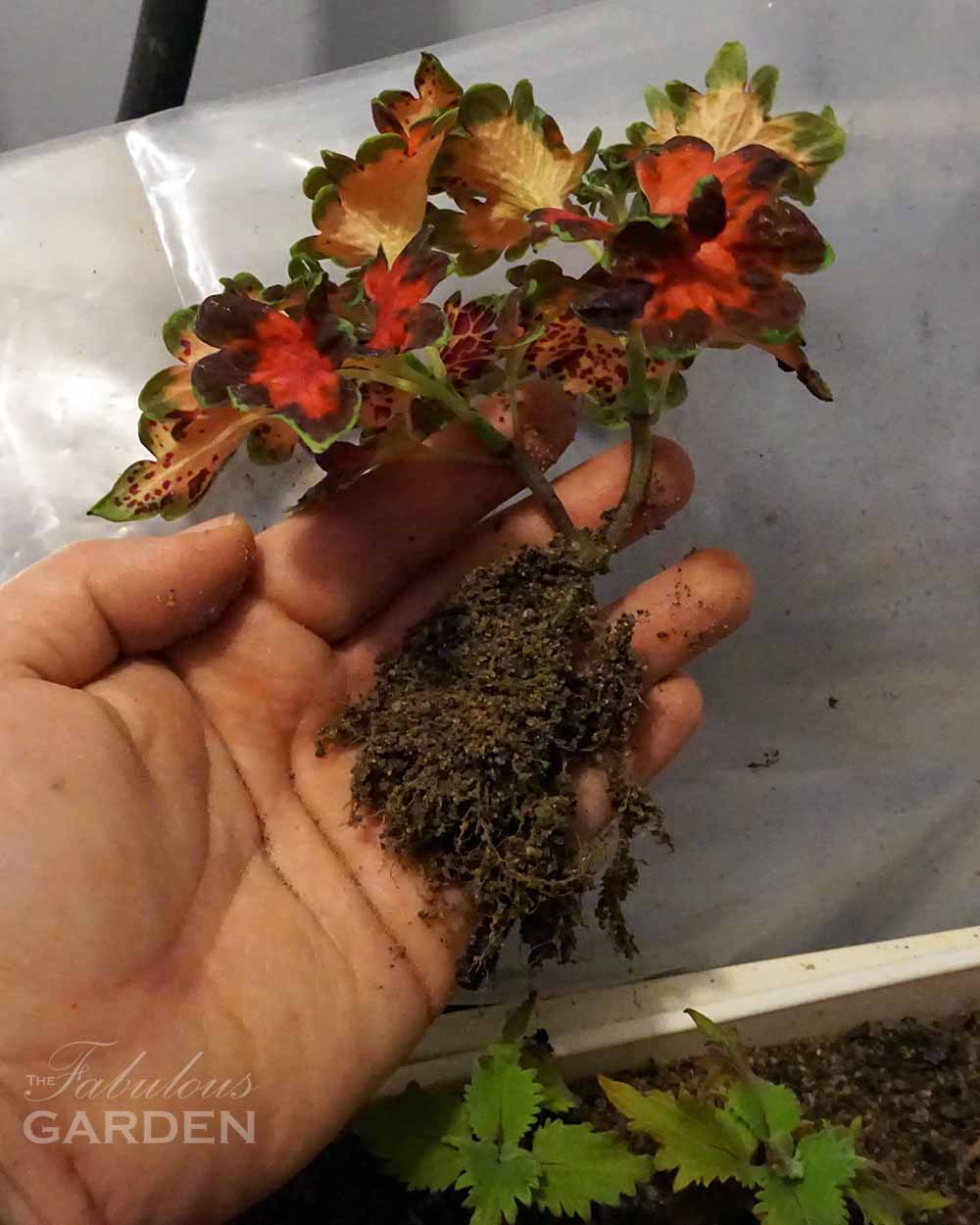 The cuttings had become a full-fledged plants!

At this point I put them into small pots of soil, and placed them back under the grow lights, as it was still too cold outside to put them in the garden. By the time it warmed up, they were a good size: 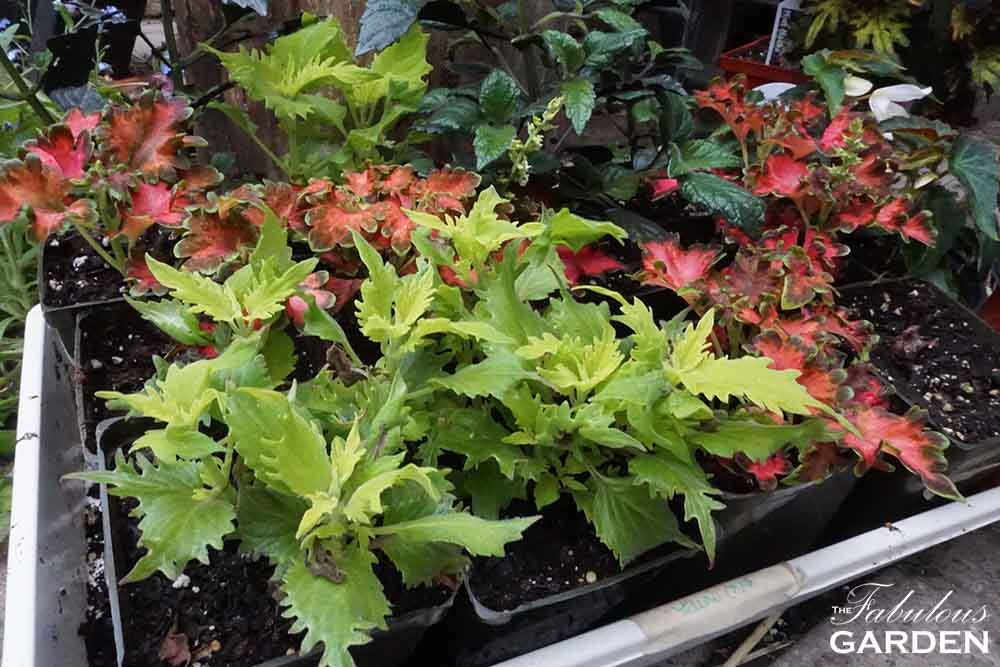 I used these coleus plants in several spots in the garden, and they’ve done extremely well. 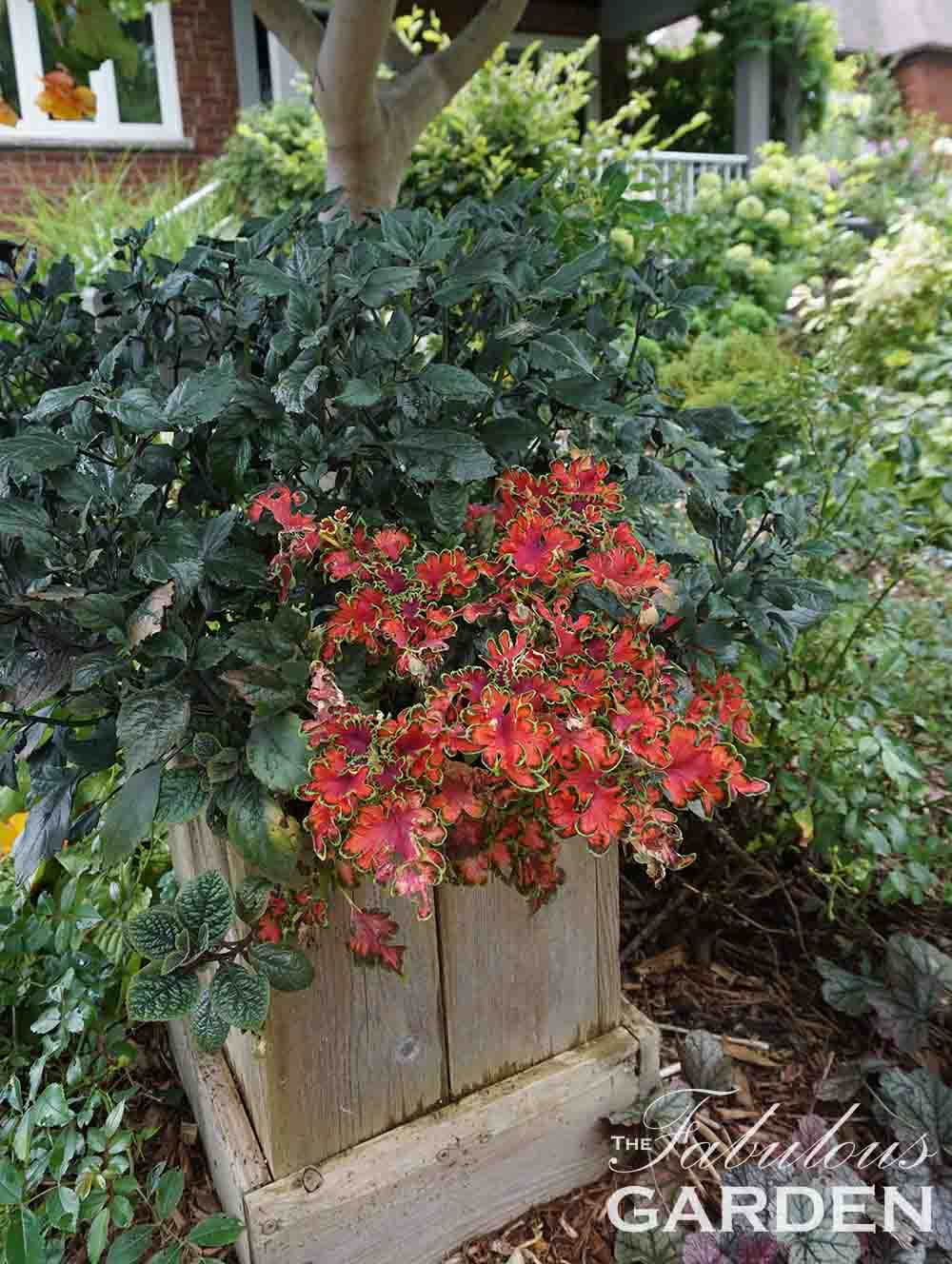 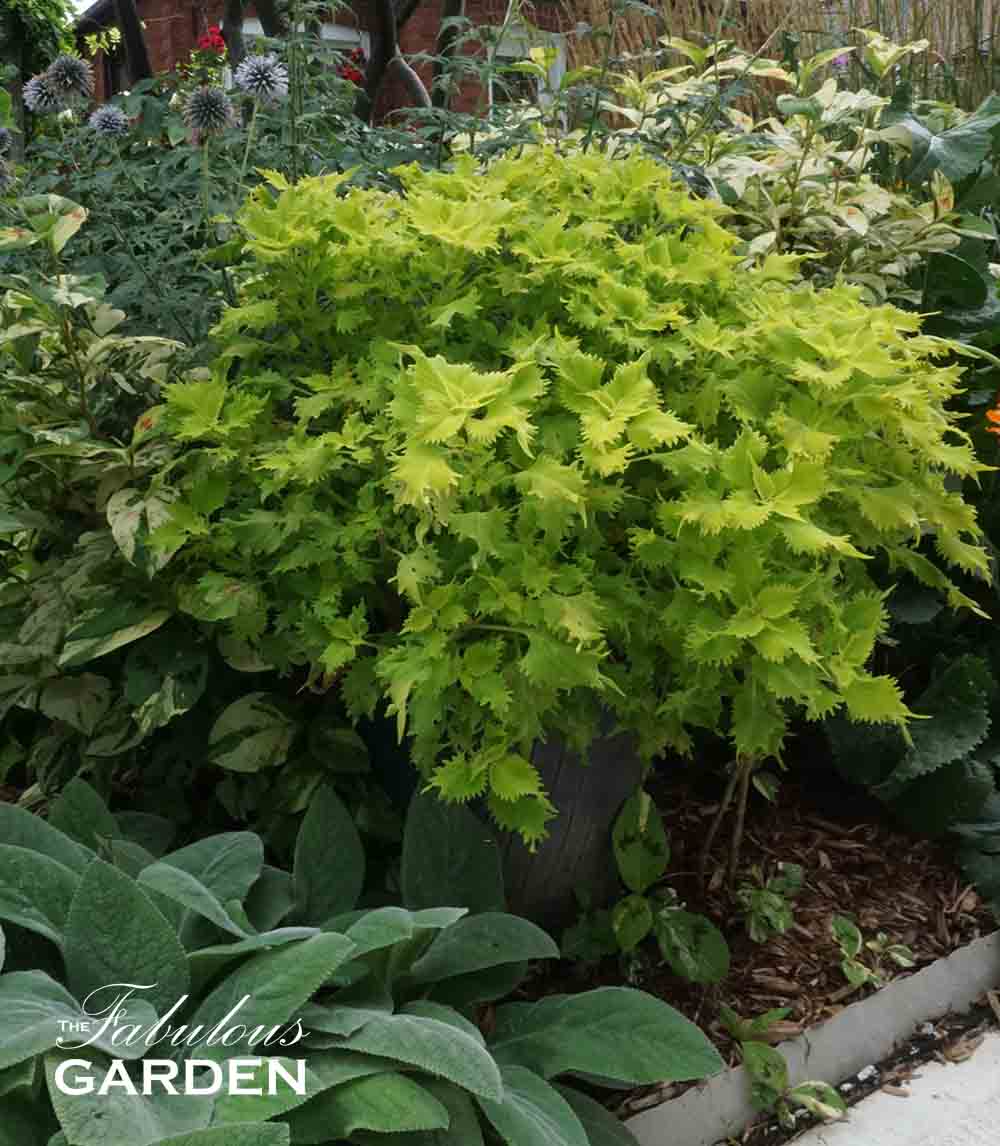 As cooler weather approaches I’ll be starting the cycle again. I’ll start by taking a few cuttings from these plants, rooting them, and turn them into houseplants for a few months. I find that easier than trying to find the space to bring one of the large adult plants in for the winter. Note, I will be sure to take my cuttings in early fall, before the weather starts to really change. As winter approaches plants start, essentially, trying to brace themselves for the colder weather. The chemical changes they undergo make it more difficult to root them after they’ve entered this stage.

I would be remiss in this post if I didn’t mention that many modern plant varieties are protected by trademarks. I’m not a legal expert, but my understanding is that it’s ok for home gardeners to make cuttings of a plant like this for your own use, but you couldn’t make cuttings to sell to others.

Do you have a favourite coleus or two that you’d like to have again next year? I’d encourage you to give this method of making new plants a try.

*Disclosure: some of the links on this page are affiliate links, meaning, at no additional cost to you, I will earn a commission if you click through and make a purchase.Save

← Rain barrels and why gardeners should have oneTomato problems. But are they really a problem? →