I’m always sad to see my beautiful flowers freeze and die in the fall. However, I am heartened to know that my begonias, dahlias and cannas will live again the next year, as long as I lift and store their fleshy root systems, called tubers and rhizomes. (If you want to get technical, begonias and dahlias have tubers and cannas have rhizomes–they’re structured differently but they perform the same function of allowing the plant to store up energy with which to grow new plants next year.) Begonias, dahlias and cannas are kind of like tulips, except tulips can (and need to) stay in the cold over the winter. The tubers and rhizomes of begonias, dahlias and cannas would not survive a winter outdoors in most of Canada, so they have to be lifted and stored indoors, which is what I’m going to show you today.

First off, let’s take a moment to admire this gorgeous begonia: 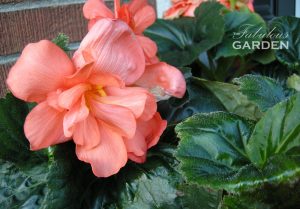 That’s what it looked like all summer–and the summer before that, and the one before that and…well, I think I’ve been keeping it going for more than five years. I love this begonia.

Once it was hit by frost it wasn’t so pretty. I pulled it out of the pot, 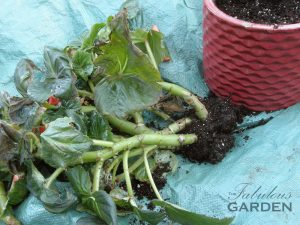 And then broke off all of the stems, leaving just this (misshapen) tuber: 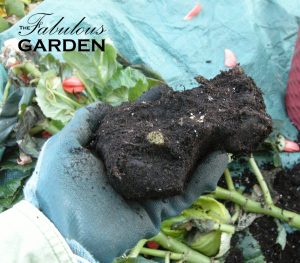 I realize that looks like a blob of soil, but it is just an oddly formed begonia tuber. As that’s not what you’ll typically see (it figures that the one I saved to dig up and photograph for you would be the weird one) let’s look at another one that I had pulled out a week or so earlier. This is more of the usual shape. It’s had a chance to dry out over that time so it isn’t covered with soil, but this is more of the shape you’ll usually see when you dig up your begonia: 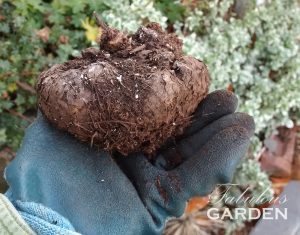 That’s a side view. The stems would have been coming out the top and the roots out the bottom.

This is the top view: 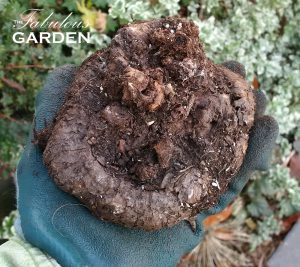 It may not look promising, but trust me, next spring new shoots will come out of there.

Both of these are good solid tubers. If it’s been a particularly wet summer sometimes there will be soft spots on the tubers—spots of rot. You can’t store them like that, as the rot would spread.  I learned, from my garden mentor, that you can try to save a tuber with rot on it by cutting the soft/rotten part out of the tuber with a sharp knife. Make sure you get all of the rot out. Then dust wood ash on the open wound to prevent more rot from forming. I don’t have a fireplace so when I needed wood ash for one of my dahlias I asked one of my nice neighbours for some of theirs, and they gladly gave me some. I have been told that this treatment doesn’t always work–it depends a lot on how much rot is in your tuber–but thankfully mine was just fine. If you’re ever in that situation I say give it a try.

So, once I lift the tubers and cleaned them off I label them (because even though I think I will remember which one was which in spring, I won’t.) My system isn’t very elegant but it works–I jot a description of the tuber on apiece of newsprint, wrap the slip around the tuber, and pop the whole thing in a cardboard box filled with the kind of wood shavings you would by as hamster bedding. Different gardeners use different materials to store their tubers–I’ve heard of shredded paper or peat moss or using nothing but just tossing them in an empty box. I’ve had good success with the wood shavings, they’re easy to get and they’re cheap so that’s the material I recommend. 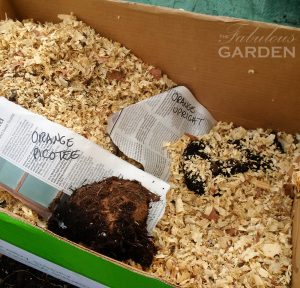 I completely cover the tubers with the wood shavings, put a lid on the box and then store them in the cold room in my friend Jean’s basement, which she kindly allows, as I don’t have a cold room or cellar. Tubers need to be stored in a space that’s quiet cool but doesn’t freeze–if it’s a little bit damp, like a cellar, that’s even better. 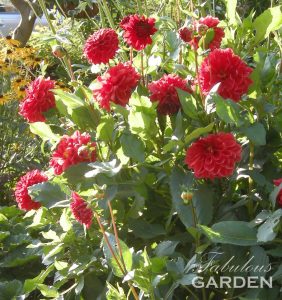 After the first hard frost I cut most of the plant off and left it in the ground for a week or so. Then I lifted the plant out of the ground, 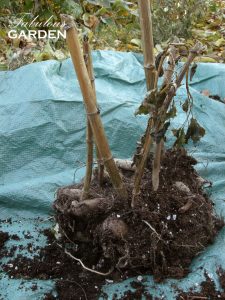 cleaned off as much of the soil from between the tuberous roots as I could, 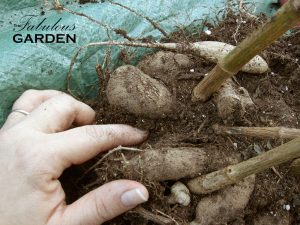 and cut off the stems, leaving about half an inch. Then I trimmed off the long thin roots, just leaving the fleshy tubers. Note that it’s much easier to get the soil out from between the tubers if you’ve had the plant out of the ground for a couple days so that the soil dries out. 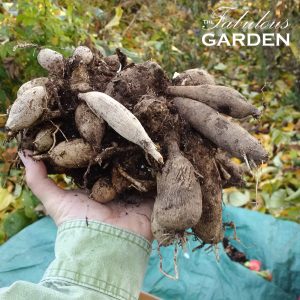 This bunch will go into another box of wood shavings/pet bedding and into the cold room to wait for spring. I’ll probably get several plants from this one clump next spring.

Finally, I had one yellow canna this year, which I’d like to save for next year. 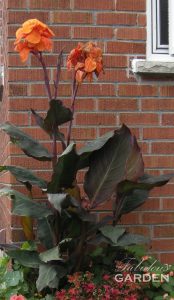 This is an orange canna I grew a few years ago, not the nice yellow canna I talk about in this post. It seems I didn’t take any photos of the yellow canna when it was in bloom.

I pulled the canna out of the soil after we’d had a hard frost: 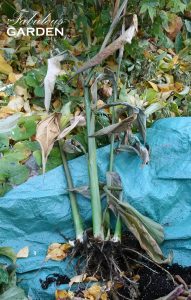 You can see that the stalks are huge but the part of the root system you can store–the rhizome–is pretty small. Some cannas have much larger rhizomes, but this is the second year I’ve grown this yellow one, and it doesn’t seem to be very prolific below the soil. I cut off the stems and cleaned off the thin roots, leaving just the rhizome: 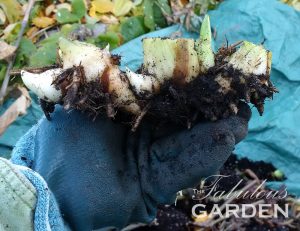 I would have liked to see a bit more rhizomous growth, but that’s how it grew. I’ve put it in the box of wood shavings with the dahlias and will learn next spring if there’s enough energy stored in those little rhizomes to make a new plant.

And that’s all there is to it! I’ll pull my boxes out in March, and get these plants started, inside, for next season.

One last tip: if you’re storing tubers and rhizomes in a very dry location you might want to check on them part way through the winter and give them a little spritz. They shouldn’t be wet while they’re in storage but if they don’t have any moisture the could shrivel away to nothing.