I was looking for some sort of material to edge my vegetable garden beds with at the same time as a friend of mine was looking to get rid of a large stack of cinder blocks. Several trips later (I could only carry 6 in my car on each trip, because of their weight!) I had my edging materials and set to work framing out my two main vegetable beds.

I decided to place most of the cement blocks with the holes facing up, instead of on edge, as I had the idea to fill them with soil and plant in them. I wasn’t sure how much the plants would like this arrangement, but it turns out that I picked the right type of plant and it worked out very well! 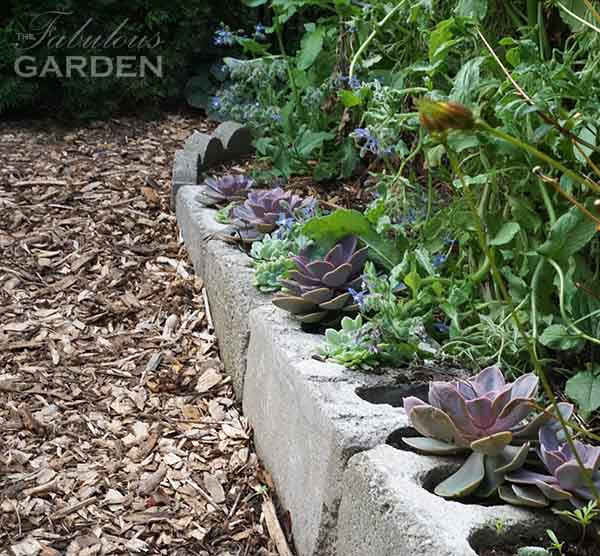 The cement gets very hot in summer and very cold in winter, and the planting holes are not that large, so this was not a good place for a tender plant that needed a lot of root space or moisture. But it was a perfect spot for succulent plants! These are plants that store moisture in their thick, fleshy leaves, and have a small root system. 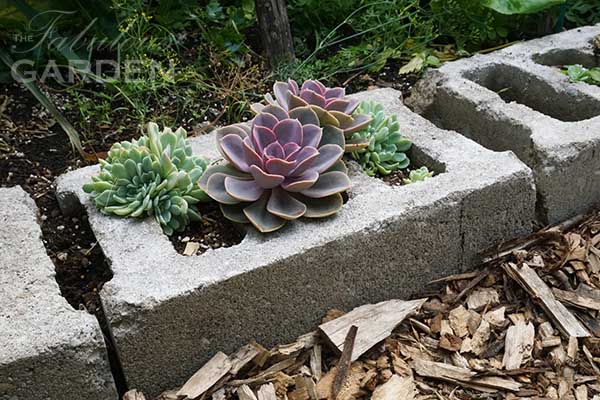 The most widely known garden succulent plants are probably Semipervivums, commonly known as ‘hens and chicks’ or ‘houseleeks’. Wikipedia suggests that their latin name is a combination of semper (“always”) and vivus (“living”) “because this perennial plant keeps its leaves in winter and is very resistant to difficult conditions of growth” and that sounds pretty accurate to me. They’re generally hardy down to USDA Zone 3. I remember them growing in my grandmother’s garden (Zone 4) in the smallest amount of very poor soil. 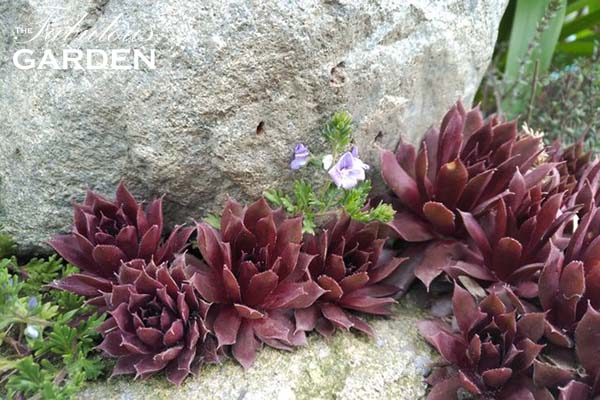 These plants were also a good choice as they are easy to propagate and I had lots of cinder block holes to plant up. They generally grow in a rosette and you can just pry the little plants off the edge of the rosette and stick them in some well drained soil in a sunny spot and they’ll grow into a brand new clump. The one thing they don’t like is soggy soil.

I also filled some of the holes with some succulent plants that are not hardy–echiverias. These are tender plants that would not survive outside in the  winter in our climate, but just loved the cinder block “pots” for the summer. Like sempervivums, they are easy to multiply, but generally you do that by taking leaf cuttings. In any case, I had quite a few of them that I had been growing inside over the winter, and I added them to the mix.

I filled the holes with a free-draining potting soil, as the growing conditions are really more container garden than garden bed. Regular soil from the adjacent vegetable bed seemed like it would likely hold too much moisture for these plants. Then I popped in my sempervivums and echiverias, watered them, and let them do their thing!

If conditions were so dry that I needed to water the vegetable beds I would also give the cinder block plantings a drink, but for the most part, I left them on their own.

Some of these blocks have been in place for three growing seasons now, but for most it’s been two seasons (I edged the beds in stages). This is one of the three year old blocks of sempervivums: 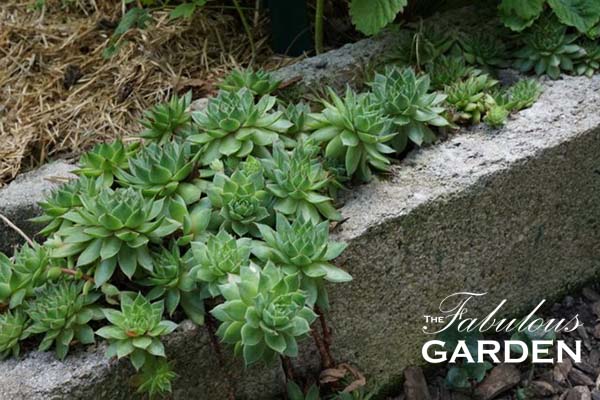 I’ve observed that some of the echiverias don’t like being in sunniest  blocks, and the sempervivums don’t grow as robustly in the shadier spots as in the sunniest spots, so I’ve been moving them around.

I was a little concerned that weeds would be a real nuisance in these blocks, but they’ve turned out to be quite manageable. Once the succulents are growing well they crowd out all of their competition.

I have allowed a few plants, including a Spanish poppy and some cosmos, to self-seed in the blocks in one section of the border, and they’re thriving, adding a lot of colour and some good food for pollinators.

Overall, I think this project worked out very well. The cinder blocks have provided the nice, tidy edge to my vegetable beds I was looking for, and the succulents and other plants make it beautiful!