Tulips are the tempermental stars of the spring garden. They put on a gorgeous show but then, if you don’t treat them just right, they disappear and you’ll never see them again. Treat them right and they’ll probably, but not always, bloom again next year. And maybe for years to come.

I’ve had some tulips come back every year for more than a decade. Most of the ones I plant come back for at least a few years, although sometimes they have smaller blooms than the first year. 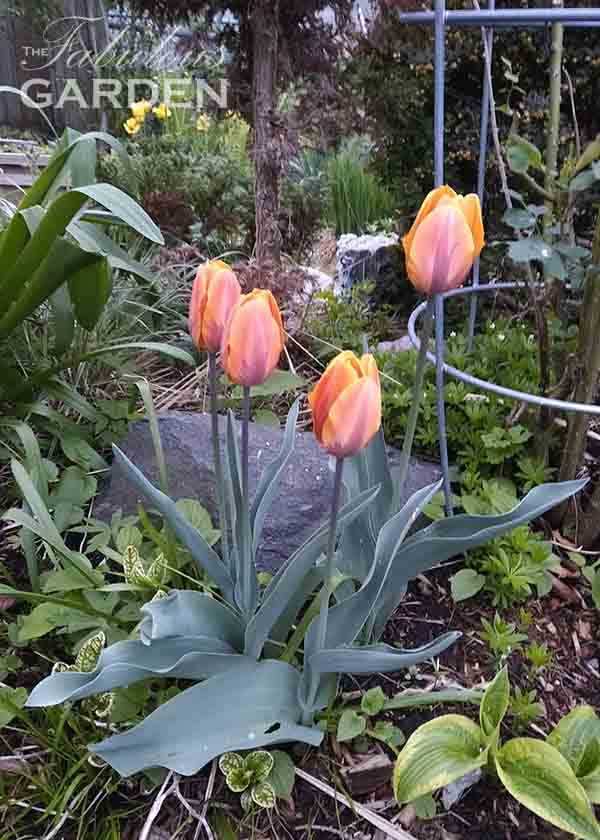 These Princess Irene tulips have been coming back for years. I think there were probably 5 in the grouping originally. The one that disappeared either didn’t come back or was likely relocated (or eaten!) by squirrels.

This reduced vigor, and the way they look while you’re getting them ready to rebloom, is why a lot of municipalities and public gardens rip their tulips out right after they bloom and plant all new bulbs in the fall. I can understand this in a public show garden where the expectation is that there are entire beds that are bright and colourful and perfect all the time, but in a home garden I think it’s just a waste to not perpetuate your tulips.

It’s very easy to get your tulips to bloom again. In fact, I’m going to show you the most important and biggest task involved right off the bat. Are you ready? This is what you have to do as soon as the petals start to fall off your tulips: 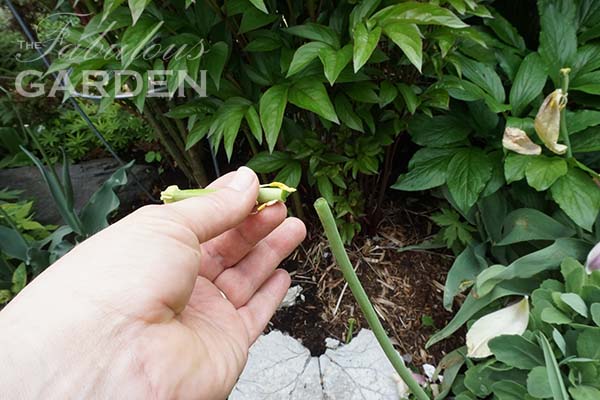 Yes, you need to go to every expired bloom and snap off or cut off the tip.

Then leave the plant alone.

The science behind the practice:

What you’ve just done is stop the tulip from trying to make seeds (i.e. if you don’t snap off the tip the plant will use up energy to make seeds. You don’t want seeds as it would take years for a tulip seed to grow into a plant that produces flowers.) Instead, it’s going to now put all of its efforts into storing energy in its bulb. This stored energy is what will be used to make the tulip flower again next spring.

The tulip uses its leaves to make energy (remember photosynthesis from science class?), so the best thing you can do for your tulips now is to let them continue to grow. You can fertilize them the same way you do the rest of your plants, and keep them watered the same way. Do not remove the leaves while they are green. Also, do not try to “tidy them up” by braiding them or doing anything else that damages them or restricts their normal functioning. 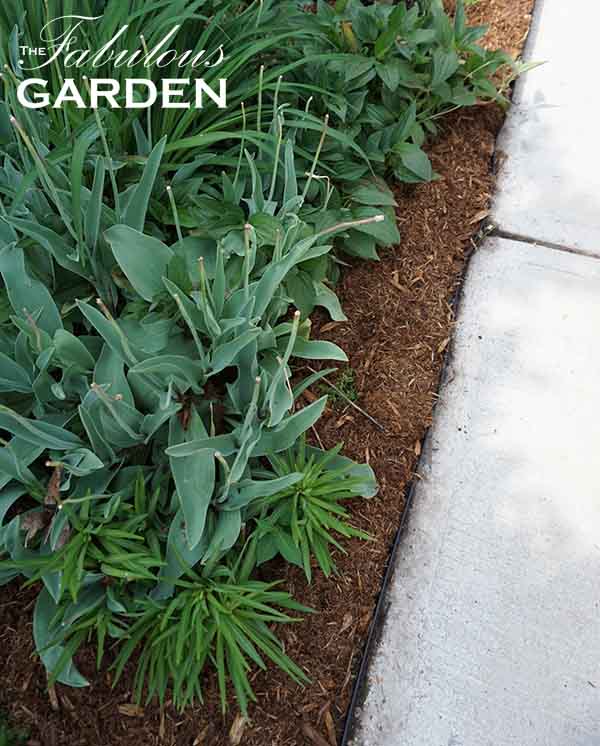 The tulips will tell you when they’re finished

Eventually, they will complete their life cycle (i.e. sufficient energy created and stored in the bulb) and the leaves will die down. When they’re brown and wilted it means they’re no longer performing photosynthesis—they’re done—and you can remove them.  But you need to leave the leaves alone until they’re quite unsightly. Garden guru Marjorie Harris describes it this way: “Every bulb will have a longer life if the foliage is left alone and allowed to mature, that is turn into a yellow, rotting mess. This is feeding next year’s crop of blooms.” 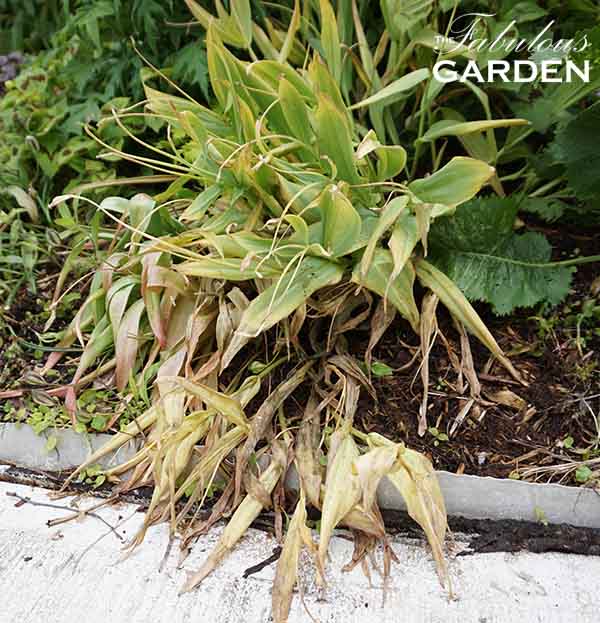 When they’re well and truly finished the leaves usually come off with just a slight tug. If you pull them and they don’t come off easily, you could leave them until they do come off, or, if the look of the dead leaves is bothering you, you could just snip them off with your secateurs.

A common way to camouflage tulip leaves while they complete their life cycle is by planting them near other plants, like hostas, that will leaf out after they’ve bloomed, and eventually cover over the foliage. This requires planning ahead when you first plant your tulip bulbs. If you didn’t do that in year one, and now wish you had, once the tulip leaves fall off you can dig down, remove the bulbs, and plant them elsewhere.

The process, once more:

And that’s all there is to it. By snipping off the flower heads after the blooms are done, and then letting the leaves live out their days, you’ve set your tulips up to bloom again next year!

Now, there are some varieties of tulips that won’t come back, or will come back with just leaves and no flowers. As I wrote at the beginning of the post, tulips are a bit temperamental when it comes to blooming for a second year. Most will, but for those that won’t..well you tried. And isn’t it worth the small effort for good odds on having them return and bloom again next year?

There are no guarantees in gardening, but the gardener’s role is to do everything within his or her power to set their plants up for success. The rest is up to the plants and the weather (and squirrels…)

Daffodils and other spring blooming bulbs 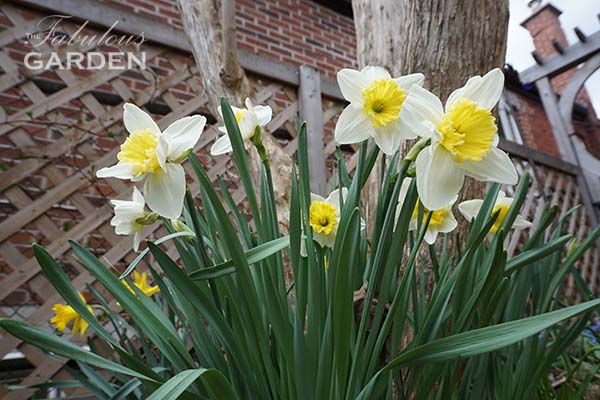 The process for tulips is the same for daffodils/narcissus. Snip off the tips and let them be.

You don’t need to snip off the tips of scilla or crocus, but you do need to leave the leaves alone until they die off. 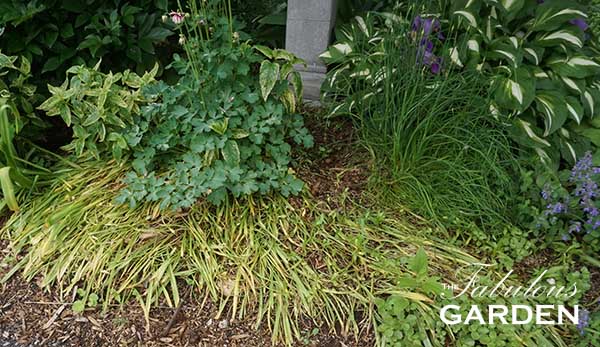 If you have a big patch of scilla in the front yard like I do, this can look pretty messy for a week or two, but I think it’s a worthwhile price to pay for the sea of blue blooms that precedes the mess.

← How to Plant TomatoesThe Magic of Mulch →