I was really looking forward to decorating my new giant planter pot for Christmas this year, but hadn’t reckoned on needing to do it in a hurry. Warm fall weather lingered here, but then winter was forecast to wallop us with a massive snowstorm mere days after I had picked my last garden tomato. Long story short, I had one day, November 9, to gather all of my supplies and get my planter done before the earth in the pot froze solid and made my life miserable. The nursery where I usually purchased my greenery closed this fall, which meant I was shopping at the big box stores, and the weather had been so warm they hadn’t yet fully stocked up. 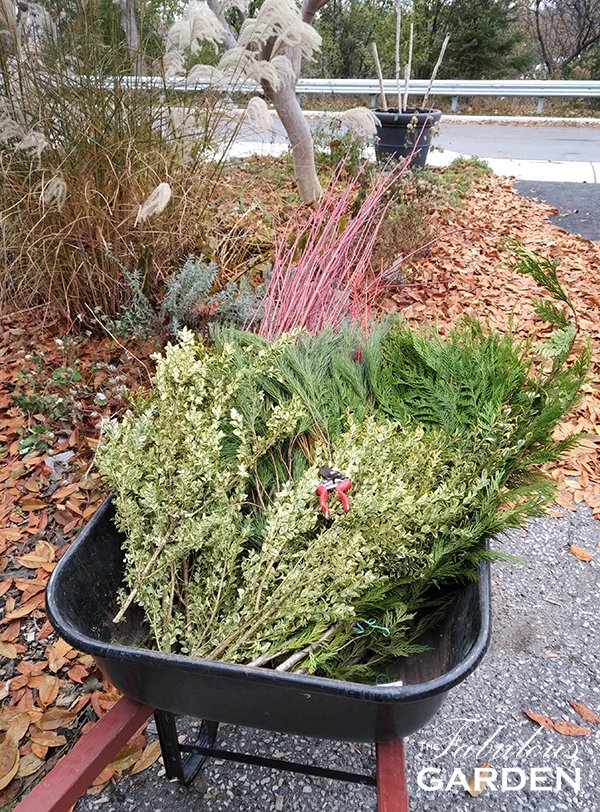 I gathered the best fresh greenery I could lay my hands on, dug into my supply of slender birch trunks and red dogwood sticks, and sharpened my secateurs.

I started by placing the birch trunks in the planter, to give height to the arrangement, and filled in with a few upright pine branches. The pine branches were shorter than I would have liked, but they were what was available. 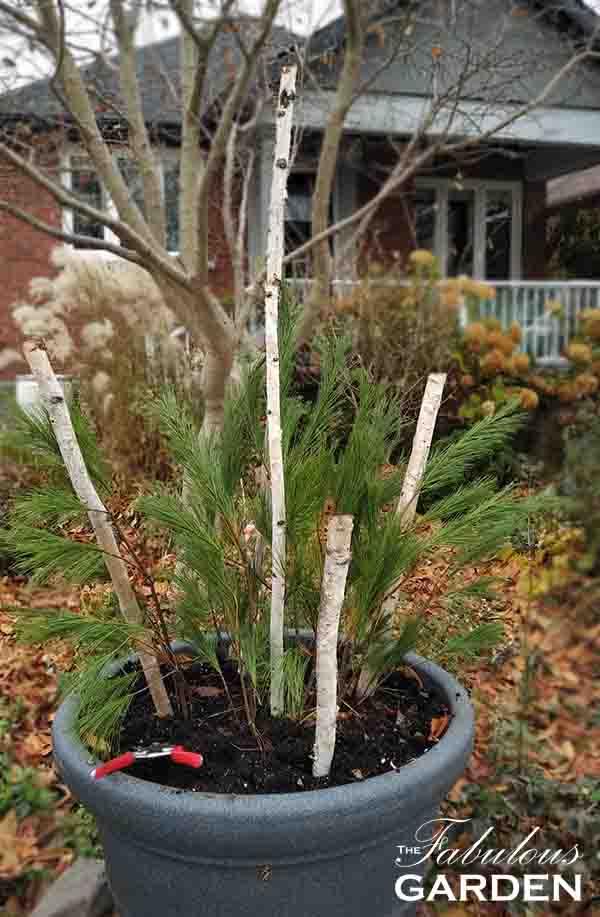 Variegated euonymus was inserted for colour and texture, along with a few branches of cedar. 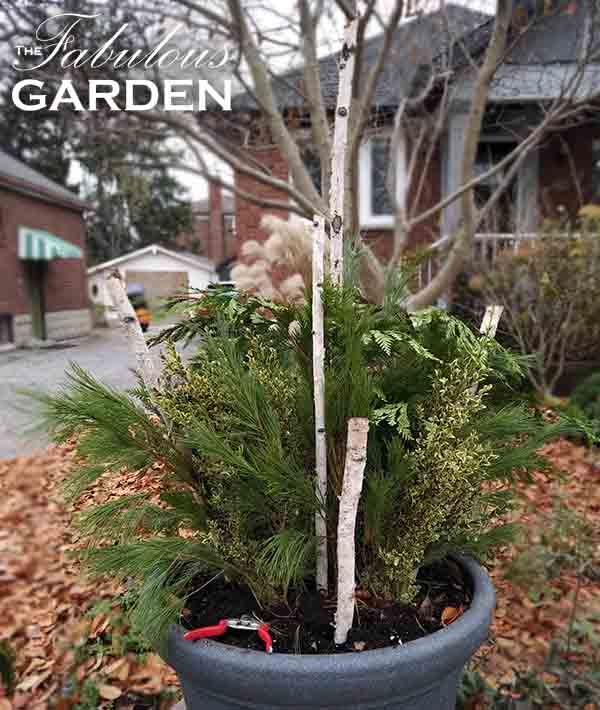 The red dogwood stems went in to raise the height of the design further, and add colour. 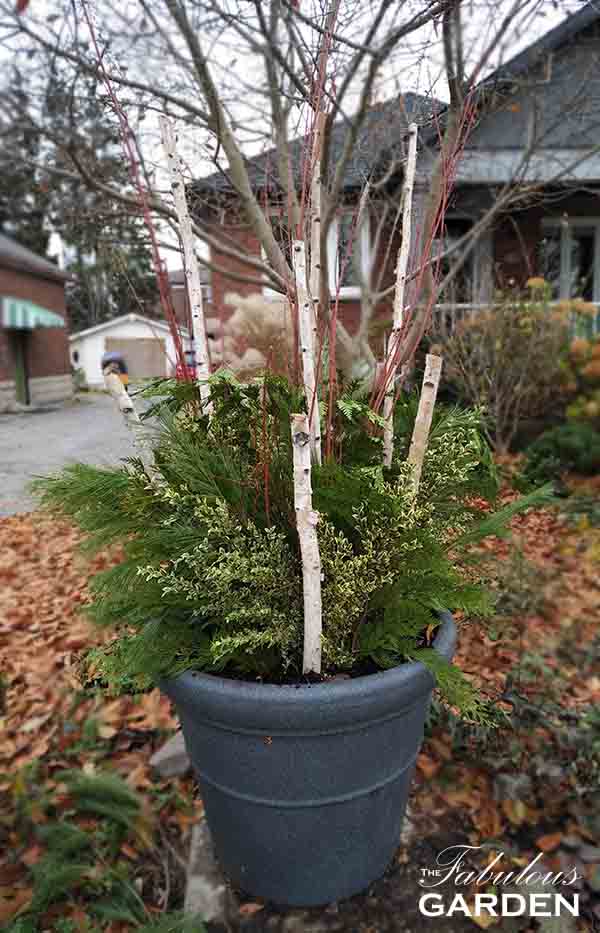 A more draping/droopy variety of cedar was placed all around the edge of the planter. 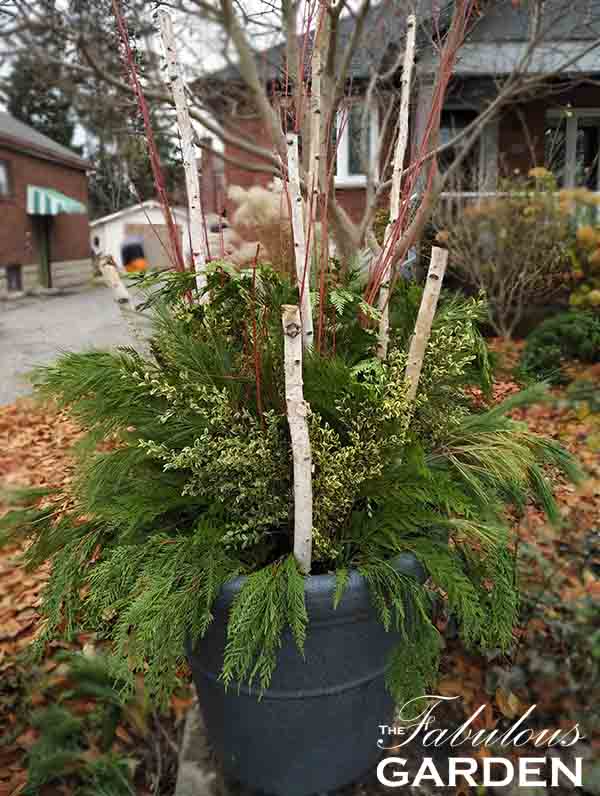 I cut some plumes from a miscanthus (grass) in the front yard and added those for some interest. They add a lot of movement to the arrangement. They don’t usually last all winter, as they get beat up by the snow and wind, but they’re nice while they last. 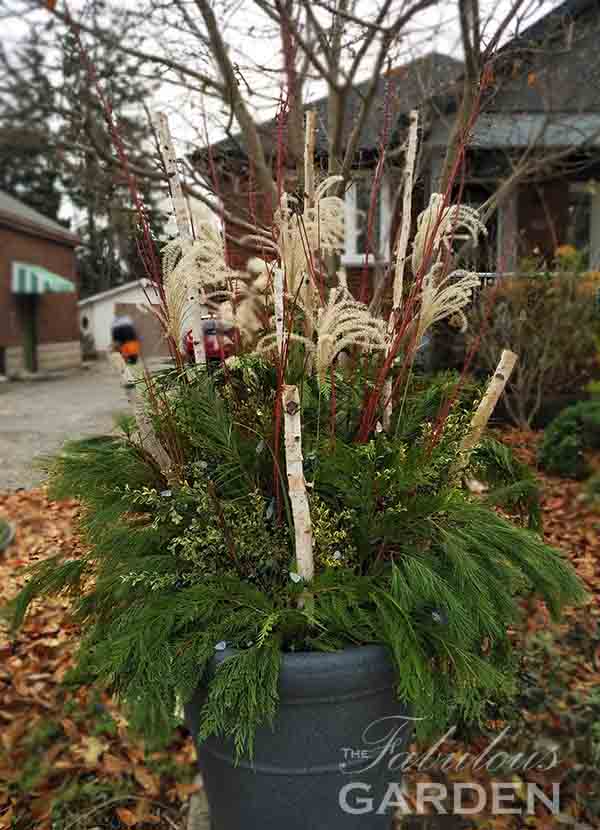 I cut some hydrangea blooms off the Incrediball Hydrangeas in the front yard. Some people spray paint these with gold, silver or red. I chose to leave mine natural. I added in the rest of the greenery that I had and pronounced the planter done, for now. 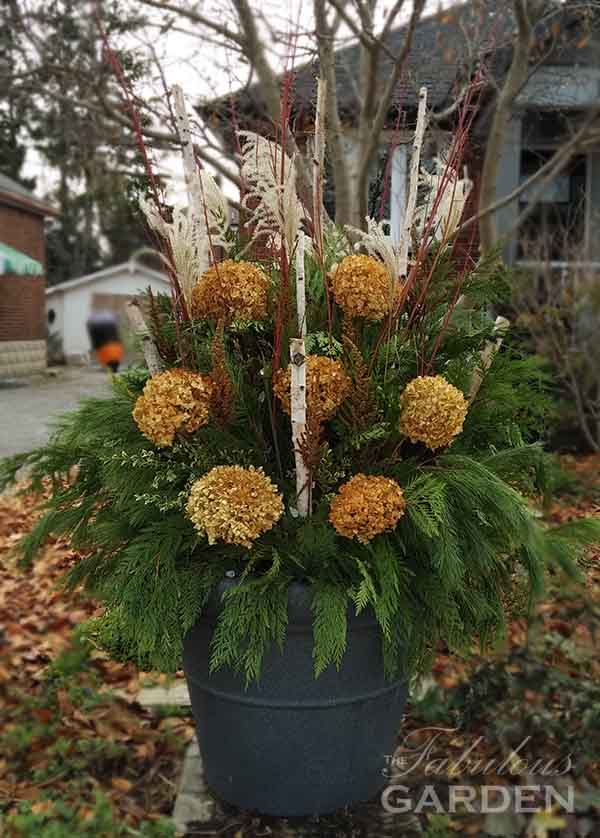 It lacked any Christmas bling, but it looked good for fall. And I felt like I could live with it for the winter if that was all I could get into it for this year.

The snowstorm hit two days later and temperatures plummeted. The soil in the planter froze solid.

Two weeks later, temperatures started to rise and I became hopeful that I might be able to thaw the planter enough to add in some red accents. I pulled out my glue gun and crafted some planter decorations out of oversized Christmas balls, as I outlined in this blog post. 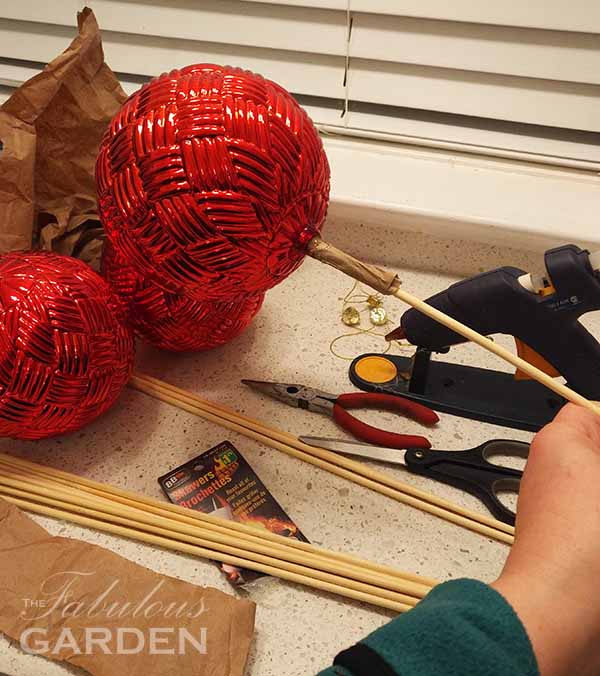 The weekend and warmer temperatures arrived, so I flooded the planter with multiple buckets of water to thaw it. (For all of you who searched my blog recently for “how to thaw urn” or “thaw frozen planter,” that’s the answer you were looking for. Just don’t do it to a ceramic or terra cotta planter or you’ll crack it. I’ve done it to cast iron urns with no problem.)

Finally, I was able to get my decorations (oversized red ornaments on sticks, artificial “red berries”, red painted pinecones on sticks, and some sparkly red branches) stuck into the soil. 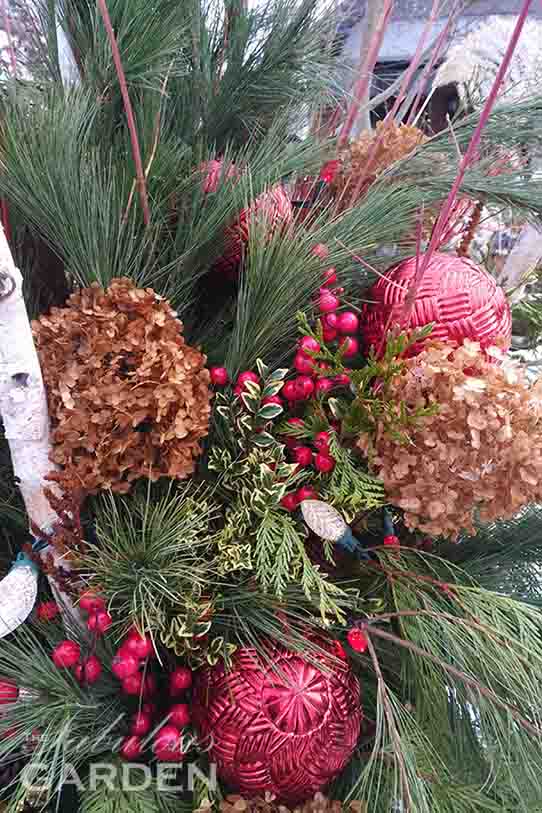 I wound a newly purchased strand of “warm white” LED Christmas lights into the arrangement, plugged them in, and thought I was done.

Two weeks later the lights stopped working. I tested the extension cord and all seemed well. It was the lights that were toast. Argh.

I untangled the lights from the arrangement, breaking off a few of the dried hydrangea blooms, miscanthus plumes, and other natural materials in the process, and generally destroying the whole flow of the arrangement. Double argh.

Back at the big box store, I exchanged the defective lights for two new strands of “warm white” LED lights and one strand of red LED lights, having decided that I needed more illumination and some festive contrast. And I purchased two more bunches of pine boughs.

I tested the lights and and then strung them through the arrangement and pronounced it good.

But the planter was frozen and I had more pine boughs to insert to fluff up the now mangled arrangement. I tried flooding the planter with several buckets of water. But it didn’t work this time as the whole arrangement, having been flooded once, was essentially one giant block of ice. The first time there were just ice crystals in the soil, but I’d made a big ice cube. So I learned a valuable tip–you can thaw a planter once in the winter by flooding it with water, but it’s not likely to work the second time around.

I ended up tucking the new pine boughs in between other branches, through the cords for the lights, and trying to secure them in any other way I could. A couple of the stems did penetrate the top layer of ice so they will freeze in place. As for the rest of the loose branches, well, we’ll see how they fare once we get some strong winds. But for now, I’m very happy with the way the planter turned out: 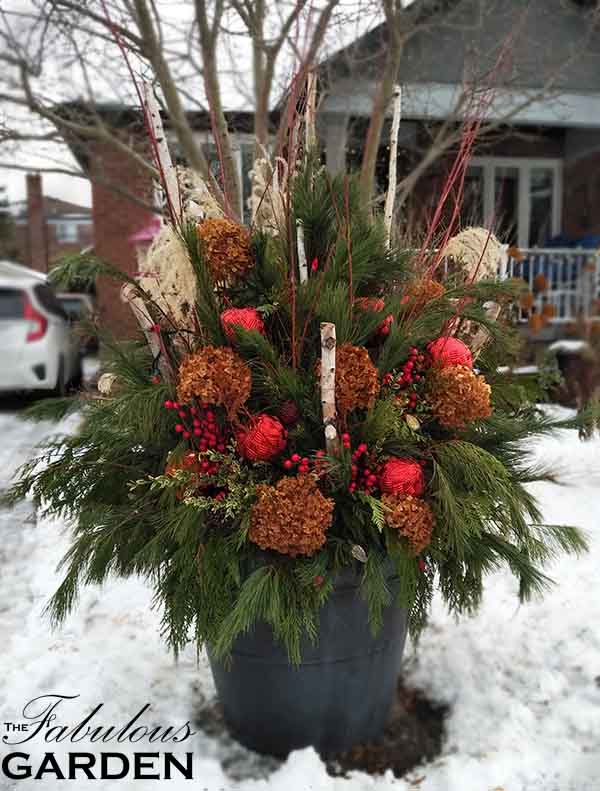 At night, the white and red lights look very festive, if I do say so myself.

Because the back of the planter is the part that I see from the house, I finished it off too. 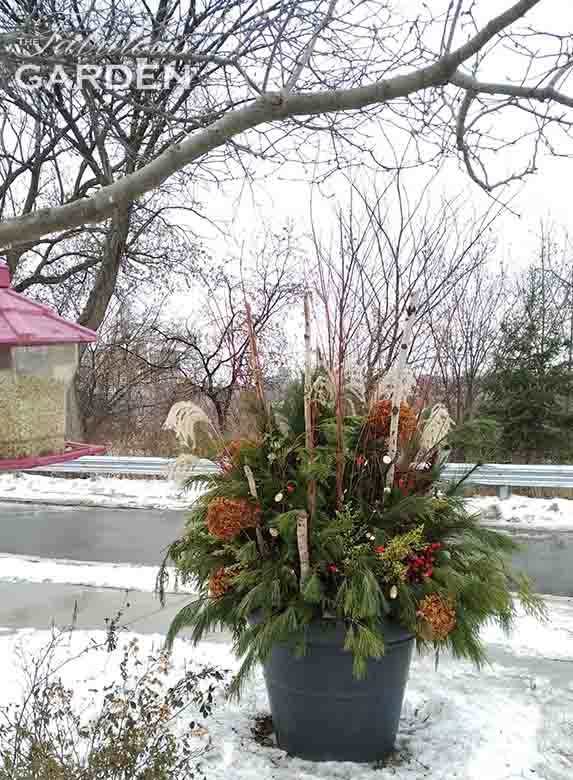 If I’d had more time I would have made and added in some red ornaments on the back. Next year…