It is infinitely more enjoyable, and better for your plants, to use sharp secateurs than dull ones. I’ve written elsewhere about how to choose a good pair of secateurs. In this post I’m going to show you how to keep your secateurs sharp so that you can enjoy pruning.

I have a pretty big garden (by city standards!) and use my secateurs quite a bit. I usually sharpen them just before I do a significant amount of pruning, and then any time I notice that they’re dull. I also take them apart and clean them once or twice a year, and sharpen them while I’m at it.

There are a variety of tools you can use for sharpening but I’m going to show you the two I use the most. I have other tools, including a sharpening stone, but using it means taking my secateurs apart to remove the blade, sharpening the blade, and then reassembling them. While that’s not difficult, it does take a lot more time than the two methods I’m going to show you, both of which can be done while you’re standing in the garden!

Important warnings, regardless of the sharpening method you use:

There is only one blade on a pair of secateurs that you sharpen, the cutting blade. It slices through the plant material until it closes on the anvil. Do not try to sharpen the anvil.

And, very important, only sharpen the bevelled edge of the cutting blade. The back of the cutting blade should be perfectly flat. If you sharpen the flat side, the cutting blade will not meet tightly with the anvil. Do it once and it won’t make much of a difference. But keep doing it and you soon won’t be able to make clean cuts. You will need to replace the blade, or, if your blade isn’t replaceable, throw out those secateurs and buy a new pair. 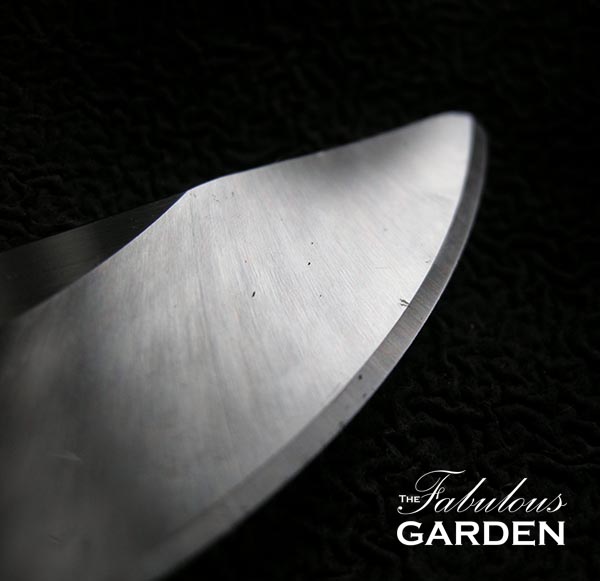 See the bevel on the edge of the blade? This is the side of the cutting blade that you should sharpen. This one is brand new and very sharp.

Also, this should go without saying, but secateur blades are sharp. Especially after you’ve just sharpened them…

Ok, here are the two tools I use to keep my secateurs sharp, along with videos on how to use them:

This sharpening tool looks a lot like a pen, and even has a handy clip so that you can carry it in your shirt pocket. Shirt pockets (and pocket protectors) aren’t usually part of my gardening attire, but hey, someone thought it was a good “feature” to add to the product. The “pen” is really just a case to protect the metal rod inside, which is coated in diamond dust. I’ve seen several brands of this stick (some with a tapered tip, which looks like it could be handy) for sale online.

Here’s a short video on how to use a diamond stick to sharpen your secateurs:

As you can see, the process is just to follow the bevel on the cutting blade, running the flat side of the sharpening stick along it. In a minute or two (depending on how dull your blade was to start with) it will be sharp.

If you have a tabletop vise, you can put the secateurs in it to keep them steady while you sharpen. When I’m not trying to hold my secateurs up to the camera while I sharpen, I usually just brace the secateurs against my body or a table. 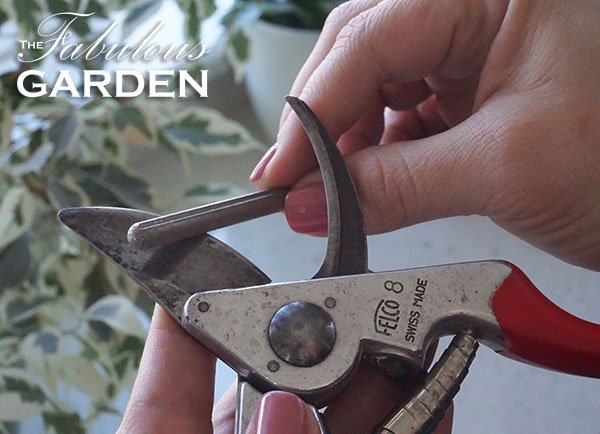 This little sharpening jig is my favourite way to sharpen my secateurs because it does a good job very quickly. Some people find it awkward to use and give up on it, but if you know what you’re doing it’s easy. This tool is made in England and has silicon carbide as its cutting surface. It’s patented and I believe Multi-Sharp is the only manufacturer.

This video shows you how to use a Multi-Sharp sharpening tool to sharpen your secateurs:

The mistake I made when I first tried to use my Multi-Sharp tool was to try to tighten the screw with whatever I had around in the potting shed at the time (the edge of a trowel, my fingernail, a plant tag). It was very frustrating because the slot on the screw is just not the right size for any of those things. I now keep a flat-headed screwdriver where I store this sharpening tool and life is much more pleasant. 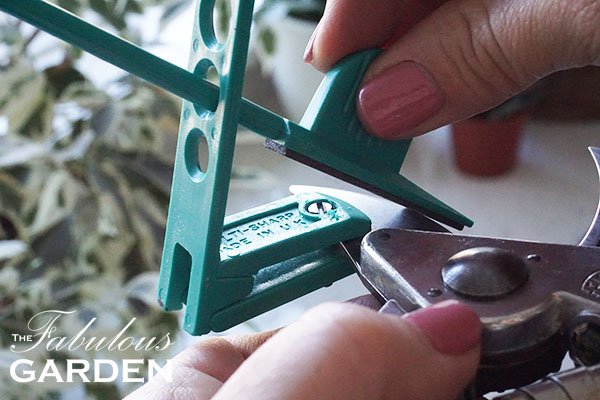 Once you have the secateur blade in the jig it’s simply a matter of using the holes on the jig to guide you in creating the perfect edge. The silicone carbide cuts quickly, so don’t go back and forth all day, or you’ll need to replace your blade. Unless the blade is really beaten up, a few swipes at each angle should do most of what you need.

I’ve only found the diamond sharpening stick and the Multi-Sharp sharpening tool in one local store but they’re widely available online. If you do any kind of pruning I highly recommend purchasing some sort of sharpening device. If you prefer a sharpening stone or some other tool to one of the ones here, that’s great. The important thing is to use it regularly.

*Disclosure: some of the links on this page are Amazon affiliate links, meaning, at no additional cost to you, I will earn a commission if you click through and make a purchase.

← The best plant labels for vegetablesCaring for Potted Hydrangeas →