While I was driving to work this morning I noticed that someone had wrapped all of the young deciduous trees and small shrubs in their yard with burlap, to protect them from the coming winter winds. In general, I’m not a fan of shrouding plants in burlap after their first winter (that first year they’re still getting established and some coddling is still in order). But what really bothered me about this was that all of these trees and shrubs still had their leaves on them.

We’re having a long fall and, where we’d usually have had a “hard frost” (the kind that kills off your tomato plants) a couple weeks ago, that hasn’t yet happened. I was still picking ripening ‘Sungold’ tomatoes this weekend.

I imagine that the burlap wrapper always wraps everything in burlap on a set date/weekend at the end of October. Heck, maybe they even read that they should do it then on a gardening website on the internet. Probably on a post with a title like “October Garden Tasks”.

But gardening well requires that the gardener pay attention to the garden. General rules about gardening and listicles about what to do in the garden at different times of the year are helpful only when applied in conjunction with your own observations about what is actually going on in your garden.

These trees and shrubs aren’t ready to be “put to bed” for the winter yet. Their leaves are still finishing off their work for the season. And who wants to look at a bundle of burlap when you could be looking at fall leaves in all of their glorious colours? 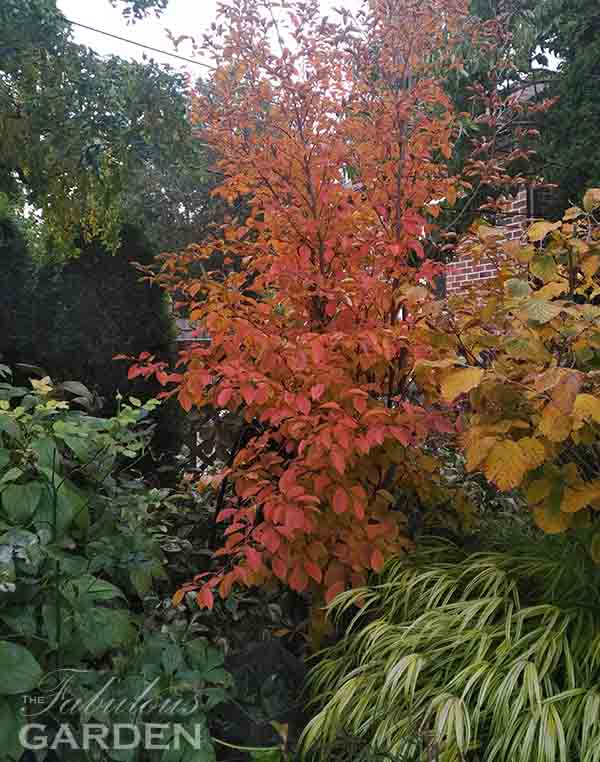 Whether you want to wrap young trees in burlap or protect your roses for the winter, you need to do it when the garden is ready. Winter should be well on its way, and the trees signalling they’re prepared for it by dropping their leaves, before you wrap them up. Roses, as I point out in this article, shouldn’t be hilled up until the ground is frozen. Some years in my garden that happens in early November. Other years it’s December.

While every newbie houseplant gardener I’ve talked to has heard, and desperately wants to believe in rules like “water your plant once a week,” they just don’t work well over the long term. I’ve written those 5 Rules for Watering Your Garden posts too, but my rules always include checking how much water the plants require and not depending on a rote rule of x times a week.

Gardening requires the gardener to pay attention and respond to where the plant is at today. Not where it should be according to the calendar, where it was at this time last year, or what some garden to do list in a magazine says. Those types of tips and lists can be helpful in knowing what needs to be done, especially when you’re just learning, but temper them with what your garden is saying to you.

Paying attention not only helps you avoid plant-damaging mistakes (those wrapped trees and shrubs are roasting under their covers, with temperatures forecast to hit 19°C/66°F this week), but it teaches you to be a better gardener and lets you enjoy your garden more. I’ve been hearing people in my area say that they cleared out their summer planters over the weekend as they were “finished”. Well, we haven’t yet had a hard frost so if their container plants were dead it wasn’t because their natural growing season was complete; it was likely because they had dried out or died from disease. The planters I’ve continued to water in my garden are still thriving. Mother Nature provided us with some bonus garden time this year if we were willing to take advantage of it!

I’m reminded of a quote by someone named Fred Dale. He said, “My green thumb came only as a result of the mistakes I made while learning to see things from the plant’s point of view.” We become better gardeners when we pay attention.

← Plant Profile: Night Sky PetuniaHow to Get A Small Pond Ready for Winter →