Echinops, commonly called Globe Thistle, is a spikey-leaved plant with perfectly round blue or white flowers. 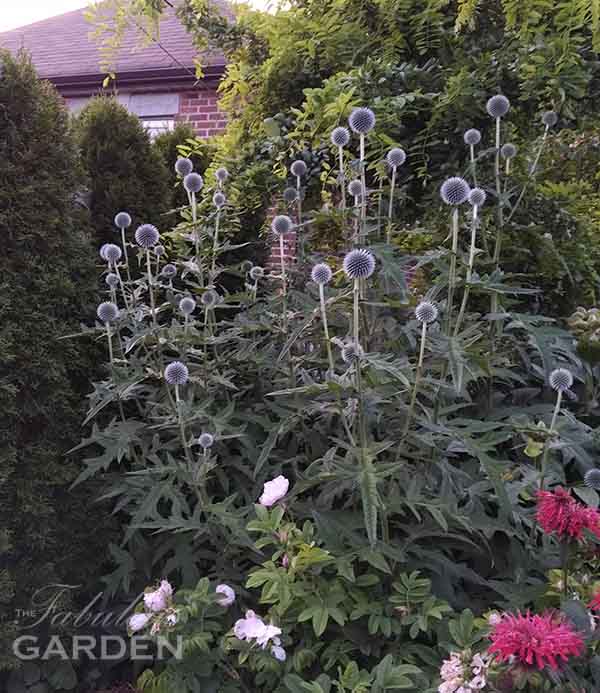 Actually, to be correct, what we think of as a single flower is actually composed of many individual flowers growing tightly together in a ball: 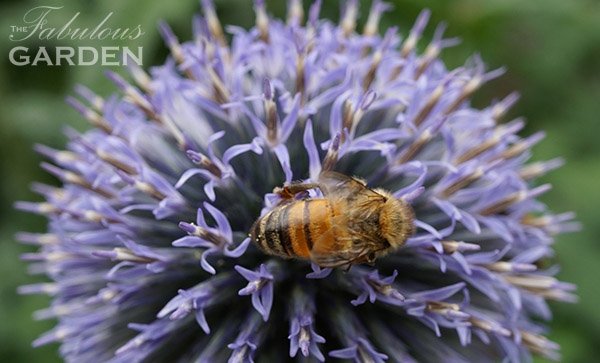 Those flowers are beloved by bees and other pollinators. B-E-L-O-V-E-D. The only other plant in my garden that attracts more bees and wasps and butterflies is Hepticodium miconidies and it’s a big tree.

The late July day that I took this photograph there were several different types of pollinators on every flower that was in bloom. 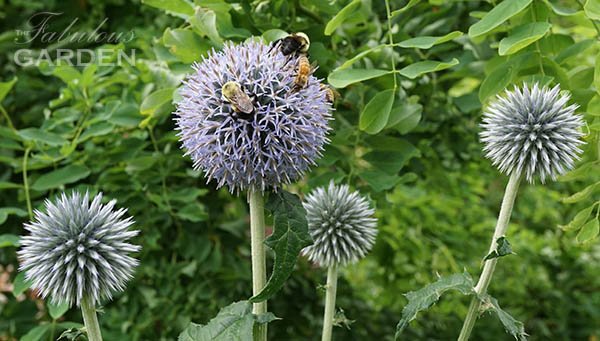 They were, of course, ignoring the flowers that were still in bud (the balls comprised of pointier spikes), and concentrating on the open flowers. 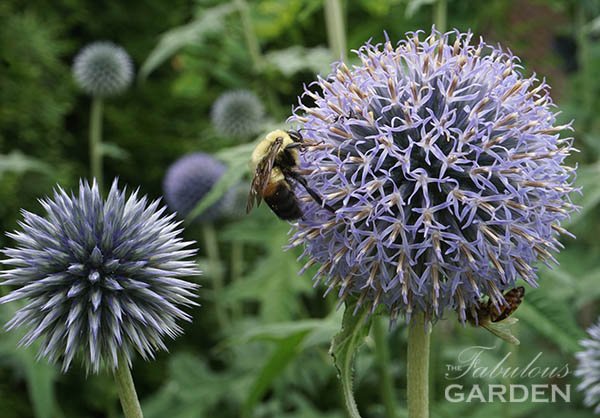 One of the visitors on the flowers that day was the incredibly striking Great Golden Digger Wasp: 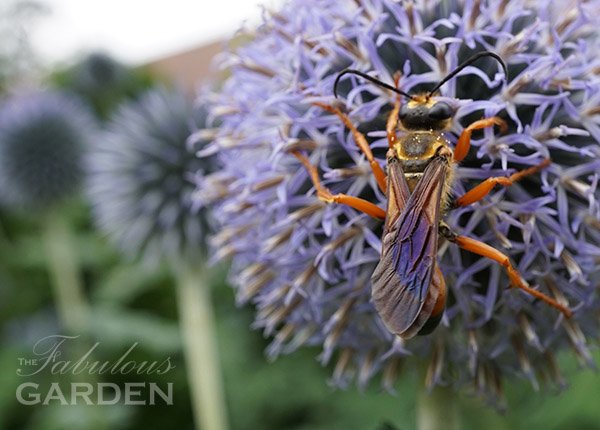 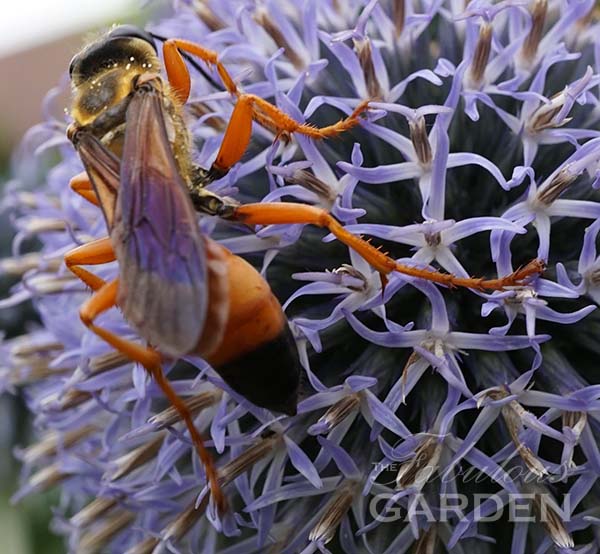 This is the most stunning wasp I’ve ever seen. I was thrilled it appeared when I had my camera with the macro lens on it! And even more excited when I discovered that the wasp was so absorbed in the flowers I could get in quite close to take photos. 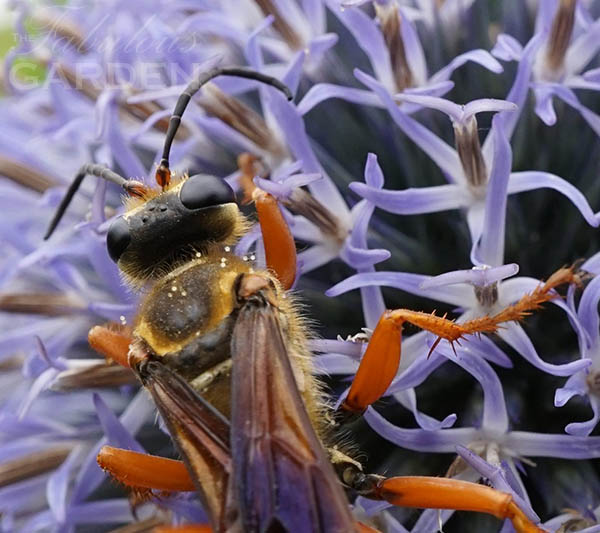 That picture is all I need to motivate me to continue growing globe thistle in my garden for the rest of my days. What more could you ask for in your garden?

Speaking of getting close to wasps reminds me of one of the most startling things I’ve ever seen anyone do in my garden. It was a few years ago and I was sitting, accidentally hidden from view, on my front porch, when two young men, probably in their early twenties, walked by on the sidewalk. There was a very large and very fuzzy bumble bee on one of the globe thistle flowers at the front of the yard. It was so big and so furry that the young men actually stopped to look at it.

One of them reached out slowly, with one finger extended, then quickly reached in further, and pet the bee! Then he ran away. His friend followed him down the street at a quick pace, likely afraid the bee would retaliate.

That’s the only time I’ve ever seen anyone pet a bee.

Echinops likes full sun and can stand a lot of heat without a lot of water. I’ve had great success with moving plants that have self-seeded (which does happen a bit with this plant, but it’s manageable) by digging them up when they’re small in the spring and either potting them up or moving them directly to a new spot in the garden.

Different varieties of globe thistle grow to different heights—I’ve seen them as short as 18” and as tall as 5’, and in fact, have both extremes growing in different spots in my garden. The leaves are serrated so you won’t want to put this plant anywhere where you’re likely to brush against it with bare skin–it won’t cut you but it’s not pleasant to brush up against it.

I’ve never dead-headed my globe thistles as I like to leave the seeds on the plants over the winter to provide food for birds, but I have read that they do respond well to dead-heading and may produce more flowers, so I will have to experiment with that on a few plants this year. 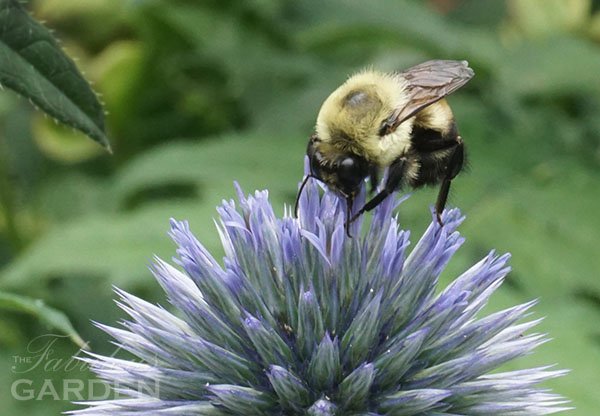 If you like Echinops you’ll also likely like Eryngium, which goes by the common name of Sea Holly. These two types of plant look similar in many ways, with their spiny foliage and spherical blue/purple or white flowers, and grow in the same sunny and hot conditions.

An interesting bit of trivia I came across while preparing this article: the latin name for this plant, Echinops, is also the name of a species of mammal, the Lesser Hedgehod Tenrec (Echinops telfairi).  Furthermore, while digging around the web, I discovered that it was Linaeaus that actually named the globe thistle back 1753, and the clever writer who provided that tidbit also shared a literal translation of the latin name: “echinos(hedgehog) ops(looks like), put it together and you have an ‘Looks-Like -a-Hedgehog’ plant!”