Or how to make sure your garden gets better every year.

Walking through my garden in spring is like meeting up with a bunch of friends I haven’t seen in months—it’s a series of happy surprises and reunions as I reflect on the good times we had together—the stunning bloom on this particular tulip, the way the water beads up into sparkling droplets on that leaf after it rains, the scent that will come when this plant blooms.

When you consider how many plants I have (I won’t number them in order to remain in denial about my plant addiction) it’s not surprising that I don’t remember exactly what is planted in every spot. If I was a more organized (and possibly less fun) person, I’d have a full landscape plan mapping out the location of each and every one of my horticultural treasures. I did start the garden this way—I even had a hard-bound book where I tracked each and every plant purchase—but that lasted about, oh, let’s see, two seasons. The first year everything was new and things were easy to document. But then the next year I wanted to make changes—I learned that plant was so tall it hid this little guy over here, so let’s switch them. Hmm, that one really would be great here and here, so maybe I’ll split it and put it in both places…well, those on the fly changes (which only became more frequent over time) never were captured on the plan in that pretty bound book. A dozen years later, the only things that remain the same on that plan and in my garden today are the property lines!

But one trick that has helped me remember what’s planted where are photographs. I take pictures of my garden all the time, and not just close-ups of pretty blooms, but shots of whole areas. I do this because I know me, and “me” will not remember in the fall that I wanted to plant more tulips by the fire hydrant. But when September comes and I’m ready to order new spring bulbs I will probably look at my photos from May to see where there were spots I wanted to fill in. And then I’ll see the shot of the spot by the fire hydrant and say “ah yes, even though that spot has filled in nicely with coleus right now, it did really look empty in the spring.” 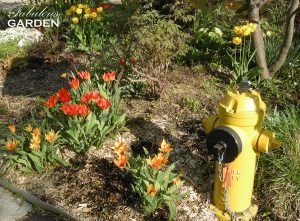 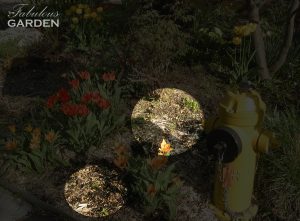 This is also a handy practice when you aren’t quite sure what the young forms of plants look like. Because I’ve been gardening for quite a few years I recognize most plants in my area even when there are only a few little shoots coming up, but if you haven’t been playing close attention from year to year (or maybe this is your first spring in a new house) the little green rockets you see emerging may be a complete mystery.

Friends often send me photos of patches of soil with a few green sprouts coming up in spring and say “is this a weed or the ____ I planted?”  Sometimes I can tell, sometimes not. If they had taken a shot of that same patch of soil last August they’d know exactly where they planted the ___. 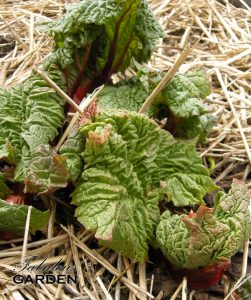 Or maybe you look at your garden in early June and say “wow, it’s fabulous!” Everything is blooming and lush and exactly how you want it. But then you stop and look at it in August and think “hmm, everything bloomed in June over there and now that whole section looks kind of boring.” That’s the time to take a photo (or ten). Then when you’re shopping for plants next May you can flip back through your photos and see where you should put in something that blooms in August (like hydrangeas, black-eyed susans, or plants with boldly coloured foliage)—and not just buy what’s in bloom at the nursery in May, like you did the year before.

For new homeowners, I suggest taking lots of photos of your gardens, right through from spring to fall. Do this and resist the urge to pull out plants because you think they might be weeds. I have lost track of the number of people that pulled out mature perennials, sometimes quite expensive plants, their first spring in a new house, thinking they were weeds or that they were plants that had died (usually they were just dormant—patience would have paid off). When in doubt, leave the plant in place and watch what it turns into. Or get a friend that knows gardens to come over and show you what plants are really weeds. Or walk around your neighbourhood and look at the good gardens in your area to see what plants those gardeners leave in and which ones they pull out.  If they’ve left it to grow (for more than a couple weeks—even good gardeners get busy and don’t get to their weeding all the time) it’s likely not a weed.

And then the next spring you’ll have all of those photos to look back on to check what turned into a weed and what was actually a plant worth keeping.

Take photos of all of the areas of your garden throughout the growing season. You’ll be amazed at how much changes. And it will help you, over time, shape your plot of land into a garden you can be proud of. Your camera (even your cell phone camera) is a powerful garden tool.

← What grows in shade?The gardener’s shadow →