One key to a fabulous garden is being aware of what’s going on in your garden. My garden mentor often quotes the old adage “The best fertilizer is the gardener’s shadow.” That phrase went through my head often this week as I was doing rounds early in the morning; I still have a lot of plants in tiny pots and cell packs from the nursery, waiting to get in the ground, so daily moisture checks are part of my essential routine right now.

Heading out the front door, one of the first things I noticed was the infestation of red lily beetles trying to devour my lilies. These pretty but detestable insects moved into our area a few years ago and wiped out almost all of my lilies. 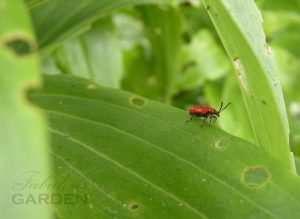 This photo is a rare shot of a single beetle—usually you find them in pairs, mating (yes, they’re prolific!)  Squishing them as I find them, which means daily, seems to be the only real control. And you have to be quick in your squishing—if the dastardly things see you coming they drop to the soil and turn on their backs—exposing just their black undersides and becoming invisible. I’ve heard that spraying the plant with Neem oil works, but either I have weirdly resilient red lily beetles or I’m doing something wrong, because that hasn’t seemed to slow them down.

The lily in the above photo is an amazing Oriental x Trumpet Lily (i.e. hybrid) by the name of Conca D’Or. Prior to the infestation it would routinely grow to 6’ and tower over visitors with wonderfully fragrant yellow blooms. It has resisted the lily beetle better than all of its deceased cousins, but year by year it’s losing vigour. I vowed to step up my patrols this year in order to save this great plant. Score 9 for me this morning and 3 for the lily beetles—some of them dropped out of sight before I could get to them.

Entering the back garden I noticed aphids had descended on one of my larger roses (the English rose, Constance Spry). 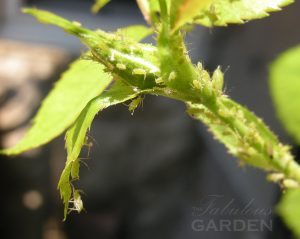 Aphids won’t generally kill a rose bush but they will ruin the flower buds, and don’t we all grow roses for the flowers? I could have sprayed the plant with insecticidal soap but I’m sure that does harm to the good bugs as well as the bad. Using a hose and a strong blast of water has been recommended as a way to combat aphids, but I’ve never found that to work (possibly because I have a wand sprayer and not a high pressure nozzle—but I think a high pressure nozzle would probably knock the buds off, along with the bugs). I opted to squish the bulk of the aphids (donning gloves and running my hands over the buds, squeezing lightly) and hope that the beneficial insects (i.e. those that prey on aphids) would deal with the rest.

My decision on this was reinforced when I reached the very back of the back garden, and encountered this dragonfly on another rose bush: 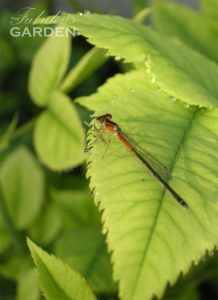 Posed against the stunningly brilliant green leaves (which are another problem I’ll get to in a minute), it made for a great photo opportunity. 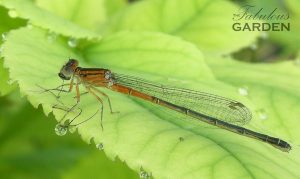 When I pulled the image up on my computer later, I realized that the dragonfly wasn’t just sitting there sunning himself—he was finishing off a snack of some small winged insect, (note the bits of wing and legs on the leaf) that had probably itself been snacking on the roses. Way to go little guy! 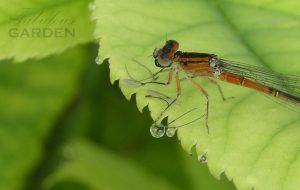 Now, the brilliant lime green leaves were what had drawn me to the back of the garden to start with. Healthy rose leaves are generally medium to dark green. The really dark veins and pale leaf tissue you see in these images show a plant that’s suffering from interveinal chlorosis–a fancy term for nutrient deficiency.

With roses, I often find that a dose of magnesium sulphate (Epsom salt) solves this problem—in fact I usually spread some around the base of each rose in the spring. That’s the treatment I gave this rose right away. I’ll monitor and if that doesn’t start to make a change in a few days I’ll apply a fertilizer that’s high in nitrogen. I may have missed this rose when spreading my usual application of compost in the spring, so that may be why it’s having some nutrient problems now.

After I checked that my seedlings had enough water to last the day, I headed back to the house, only to spot an interesting curiosity on the stucco, at eye level, outside our front door: 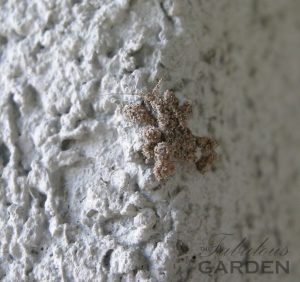 At first I thought it was a bit of mud on the stucco, but then noticed it moving. I peered in for a closer look and saw that it was actually an insect covered in sand: 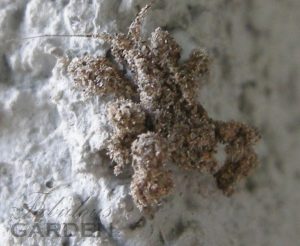 Looking it up on Google later, I learned that it’s a young masked hunter (Reduvius personatus) bug. They’re predator bugs that feed on earwigs, silverfish and other insects. Yay, another good insect (if you’ve ever had your dahlias devoured by earwigs you’ll cheer too!)

As you can see by all of the above, a little daily walk through the garden—really paying attention to what you’re seeing—can help nip a lot of problems in the bud (or spot problems on your buds!) Is this part of your gardening routine?

← What’s coming up in my garden?Is your garden hungry? →