One of my favourite garden centres is closing in September, after more than 130 years of operation. Plant World is just 2 kilometres (less than a mile) from my home, on a road I have traveled twice daily for most of the last 16 years I’ve lived here. I started shopping there a year or two earlier, and I remember telling friends, when I bought my house, that one of the great things about the location was its close proximity to Plant World. 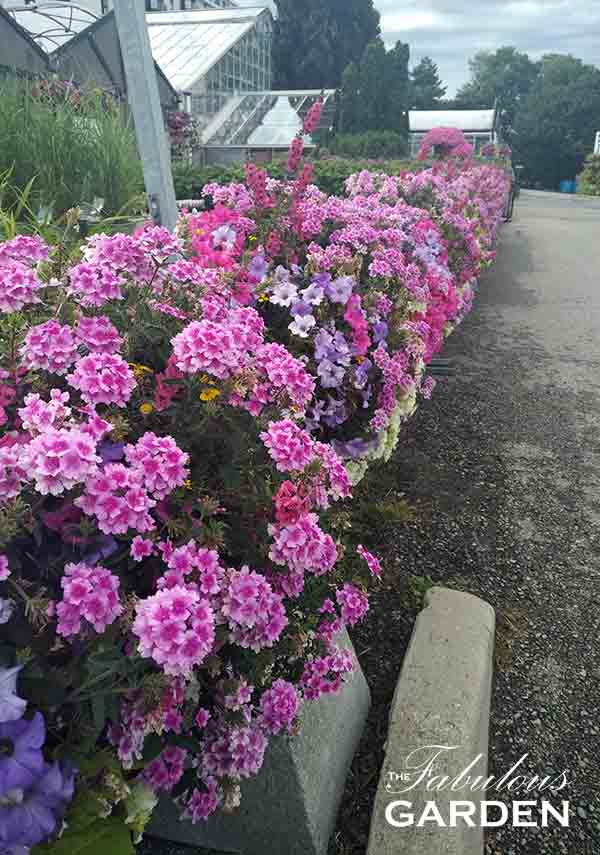 Unlike many stories I’ve read of independent garden centres closing because they couldn’t stay afloat, this one is leaving because of the most Toronto of reasons–the property has been sold to condo developers. It was announced about three years ago and the current owners, great, great, great grandsons of the founder, said at the time that they weren’t closing but were just going to move to a new location. It seems that the search for a large piece of land in the city didn’t go very well, or maybe it was easier to just cash out than start over. Regardless of the reason, Plant World is closing in September and I’m sad to see it go.

A series of ever increasing discounts are being offered between now and closing. Retail therapy might just be the thing to ease my sorrow, so I visited last week during the 30 per cent off event.

What did I buy and why? And where am I going to find space in my already full garden for more plants? I’ll answer the what and why below, and you can watch this blog in future to see if you can spot where they get wedged in.

I decided not to get a cart, as a way to keep myself from buying far too much. It worked, to an extent. Here’s what I bought. 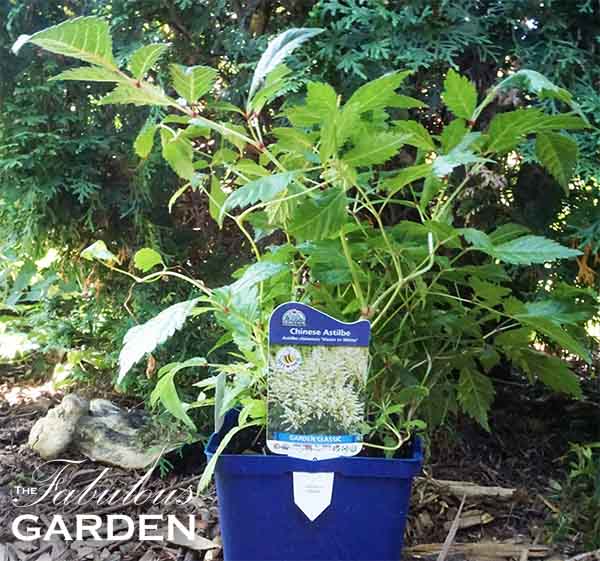 I have quite a few astilbe plants already, and love that they grow well in the shade. I’m not overly fond of the pinky purple flowers on most varieties, and that’s the  colour of the bloom on most of my existing astilbe plants. I have some miniature astilbes with white blooms but no full size plants. I’ve looked at them quite a few times in the nursery but never felt like shelling out full price for what is, really, a fairly common plant. I kept thinking I’d find some at a horticultural society’s plant sale or from a friend. 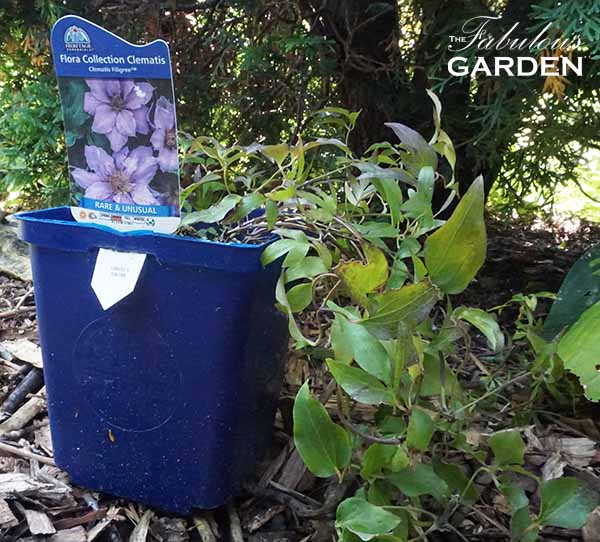 When I walked into Plant World I did a quick circuit through the clematis area, but only saw varieties that I already had or that looked very similar to ones I already had. Nothing exciting.

Then, while browsing in the perennial plant section of the store, where all of the perennials that like sun are arranged alphabetically (there’s a similar alphabetical section for shade perennials), I came across this clematis. The prominent words “rare and unusual” splashed across the front of the plant tag reeled me in for a closer look (I am SO susceptible to plant marketing. You’d never catch me falling for that line if I were shopping for groceries, make-up, or just about anything else).

First of all, I noticed that the flowers were double (i.e. lots of full petals) and a nice light mauve colour. Then the description on the back of the tag sealed the deal (my thoughts are italicized in brackets):

Ok, what more could you ask for in a clematis? This one’s coming home. 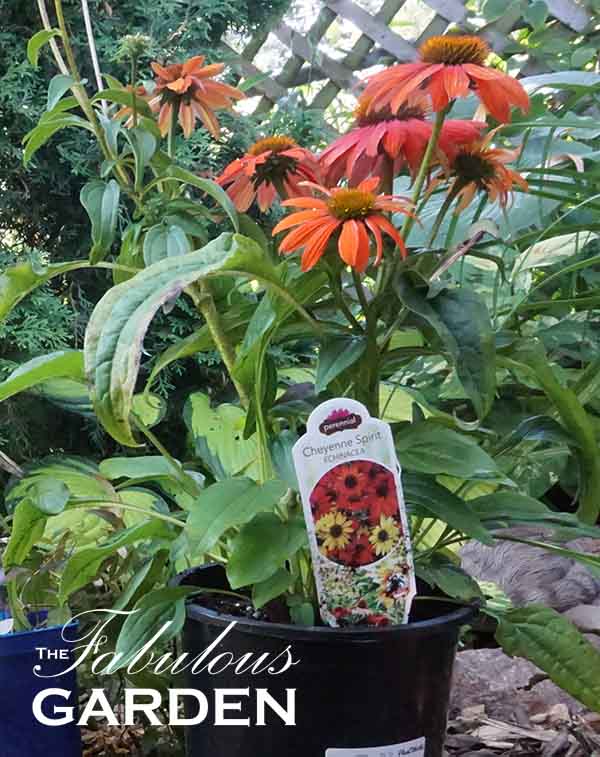 About ten years ago plant breeders started releasing all sorts of amazing new coneflower cultivars on the market. No more were we restrained to standard purple echinacea but now there were blooms, single and double, in various shades of hot pink and orange. At the time, I was smitten with one of the brand new orange varieties and paid full price for the new introduction. It lasted one season and never returned. Hmph.

But I learned I was not alone; this article points out that others were having the same problems. In this case, it had to do with the new echniaceas not setting seeds (they were propagated through tissue culture), so if they died out over the winter (which often happened) there was no seed from which the plant could sprout. I’ve had other new plant introductions fail because they were rushed to market with over-stated and under-tested claims about their hardiness and disease resistance; an expensive dwarf redbud tree ordered from a very reputable Canadian mail order nursery comes to mind, as does a particularly fetching lime coloured heuchera, from back when that was a novelty in heuchera breeding.

All of this was in the back of my mind as I admired the display of various vibrant echinaceas: 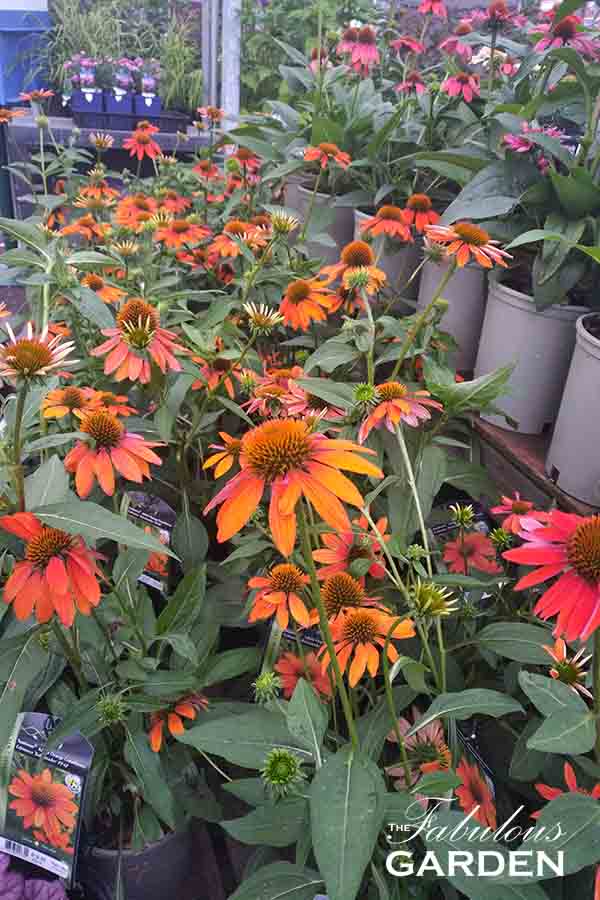 I reasoned that these brightly coloured varieties are no longer brand new introductions so growers must have figured out which ones were hardy by now. Right?

The colour was irresistible–into my arms went ‘Cheyenne Spirit’. I headed to the cashier.

Once home, I looked up Echinacea ‘Cheyenne Spirit’ and I’m not convinced that it is actually any hardier than other earlier cultivars, but it is described as an innovation in echinacea breeding as it can be grown from seed and not just tissue culture. So at least if it does die off over the winter I have a chance of it growing from seed. I’ll just have to remember not to dead head it near the end of the season.

So that’s what I bought. I hope you enjoyed “shopping” with me.

As of this writing, all of the plants are still sitting in their pots. But I I do have some ideas on where to squeeze them in!