Mulch can instantly transform the look of your garden and provides real benefits in terms of maintenance and moisture retention. I am a big believer in mulch for the health of my garden, but I will admit that it was purely aesthetics that drove me to mulch the bed along my front sidewalk during the midday heat. I hated the way that area of the garden was looking–it didn’t look cared for: 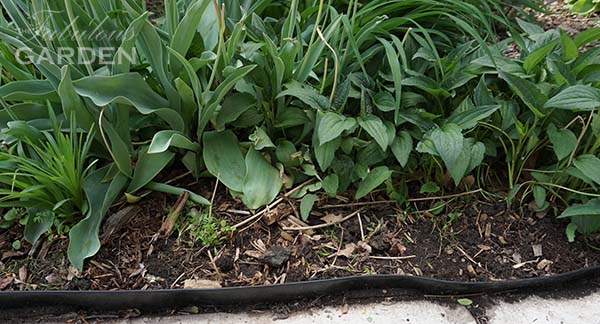 I had weeded it and put new edging in along the sidewalk (to replace the edging that the city’s sidewalk plow destroyed over the winter), but that wasn’t enough. It needed mulch. 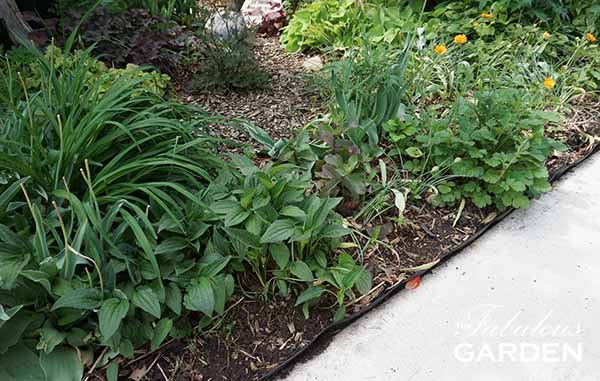 Then the clouds parted, the sun shone, and my garden looked like it belonged to someone who actually cared about gardening! 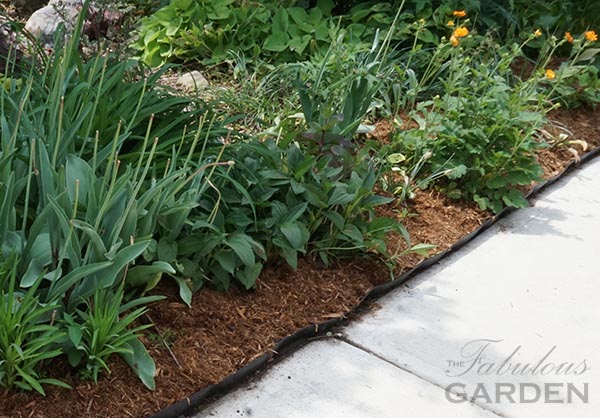 Same magic in a different part of the bed:

I hope the pictures convey what a huge improvement this was–in person it’s like the difference between wearing jeans and a t-shirt vs wearing jeans and t-shirt with funky shoes, a great scarf and a jacket and earrings. We’re runway ready now!

Mulch is more than just a pretty face

Mulch helps keep soil moist, by providing an insulating layer that slows down evaporation. If you have an unmulched bed and a mulched bed side by side, you will need to water the unmulched bed more often. If you garden in a dry and windy area, mulch also helps prevent soil from blowing away (soil erosion is the technical term for that).

Mulch suppresses weed growth by preventing light from reaching the soil, thereby inhibiting weed seed germination. Weeds that do grow will tend to be spindly (from having to grow up through the mulch) and are easier to pull out than weeds in unmulched ground, as the soil will be moist.

Mulch breaks down over time (some types faster than others) and, in so doing, provides organic matter for your garden. Feeding your soil is important in order to have healthy plants.

I use natural shredded cedar mulch because I like the way it looks and smells, it’s economical in my area, and it composts in a year or two, meaning it enriches the soil in my garden and feeds my plants. I strongly dislike dyed mulches, especially the orange varieties, as I don’t like the way they look and I don’t want to add dye to my soil. I also learned the hard way (helping a friend who had bought black mulch) that if you handle dyed mulch with your bare hands, the colour stains.

Wood or bark chips can be another good option–they’re in bigger pieces so they take longer to break down, meaning you don’t have to apply them every year. When wood decomposes it does lock up nitrogen from the soil (and nitrogen makes your plants grow, so you don’t want it locked up) while it’s composting, so some people say not to use it as a mulch as you will starve your plants. My answer to that is to say that I’ve used wood chips for all the paths in my garden for almost 15 years and I haven’t had a problem. I don’t use them as mulch on my beds any more, but I used to and again, it didn’t seem to cause any problems.

I tried a bag of cocoa mulch on an area of my garden once and really enjoyed the look and chocolately smell. However, I understand that this mulch is toxic to dogs, so I chose not to use it any more. It’s also one of the more costly mulch options.

I’ve heard that in parts of the U.S., pecan and walnut shells are sold as mulch. I can see these being good options if you have nut processing plants in your neck of the woods.

Recently, mulches made from synthetic products, like shredded old tires, came on the market. I don’t recommend them as, over time, they will get worked into the garden soil and there’s no way to separate them out. The mulch will degrade and leach chemicals into the soil eventually, and that doesn’t seem to me to be a good idea.  For one thing, at some point in the future, you or someone else may want to grow vegetables in that spot. For another, those chemicals may harm or kill off your plants. No, we shouldn’t be putting shredded rubber in our gardens.

If you only have a tiny garden bed the cost of a bag of mulch isn’t going to cost you any more than a common plant for that same bed and it’s probably not worth driving all over town to find a bag on sale. However, if you have a larger area to cover I would suggest shopping around as, especially in spring, prices vary widely. I picked up half a dozen bags of cedar mulch the other day for $2 each–I had checked the sales flyers from our local big box stores in advance and noticed one of them was featuring mulch at this price.  On the way home I stopped at a competing big box store across the street for some paint and noticed a gentleman loading up his cart with the exact same mulch I’d bought, but at $4.95 a bag.

If you have a really large garden the most convenient, and likely cost effective, option is to order a bulk delivery of mulch to your home. I ordered a cubic yard of mulch two years ago, and let me tell you that’s a lot of mulch to shovel on a hot day!  After that experience I decided that bagged mulch was probably the best option for my flower beds (I use straw for my vegetable beds).

Clear all the weeds out of the area you’re going to mulch. Mulch will cover them, but it’s unlikely to smoother them, and if you don’t weed first, you’ll still have to do it eventually when they grow through the mulch. The only good thing about that option is that mulch keeps the soil moist so weeds usually lift out a bit easier.

Shovel or pour mulch into the open areas (i.e. where you can see soil) of your garden. Spread it around your plants, being careful not to bury the crown of any perennials (i.e. the part of the plant that emerges from the soil). You can get quite close to herbaceous plants (i.e. perennials and annual flowers) but leave a bit of space around the stems of woody plants (i.e. trees and shrubs). 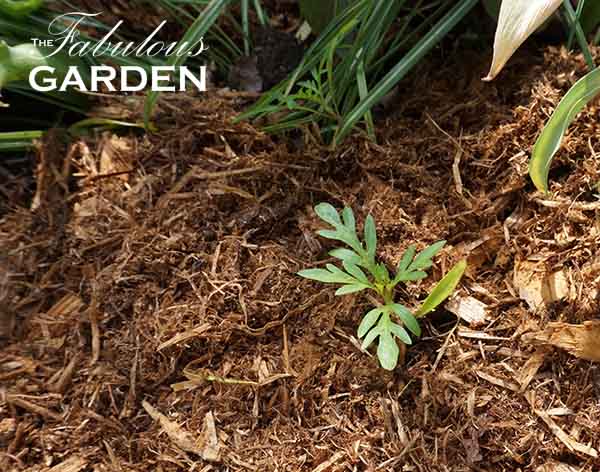 Uncover any plant leaves that get covered by the mulch. I usually hold up droopy plants (like hosta leaves) with one hand, while I spread mulch underneath with the other.

Mulch is most effective when you don’t skimp on it. I aim to get it about 2″ (5 cm) thick. Scattering it scantily, like berries on your cereal, won’t do much for the looks or health of your garden.

How not to mulch

If your garden is on a garden tour, you’re hosting a wedding or big party at your house, or you just want your garden to look fabulous–mulching is an excellent technique to make your garden look great. Mulch also feeds your soil, reduces water evaporation, and suppresses weed growth. What’s not to love about mulch? 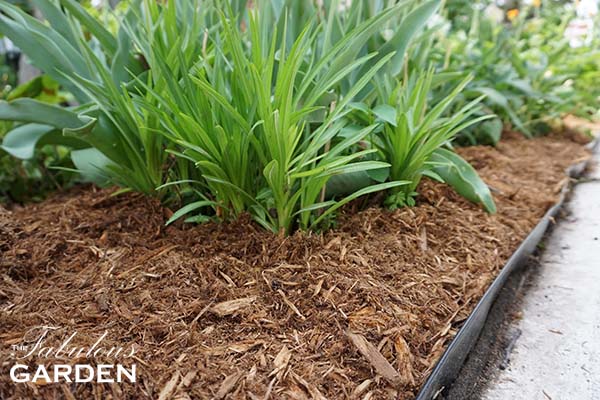