One of the “features” of our front yard is that it has a bright yellow fire hydrant at the northwest corner. When I first bought the house I noted its presence and promptly started gardening around it. 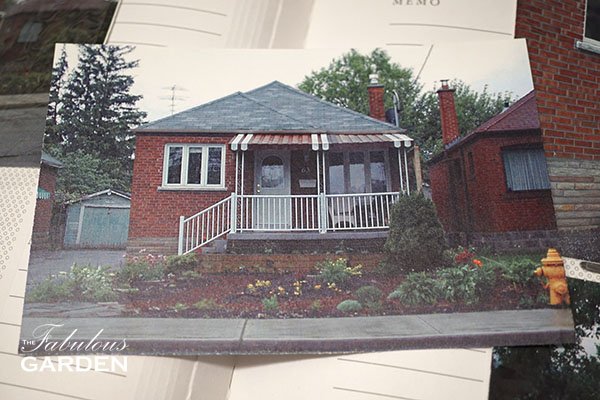 At first, I tried to plant yellow flowers nearby to make it all look kind of coordinated. Eventually, I realized that the fire hydrant was an odd shade of yellow that matched very few flowers. So I adopted the strategy of ignoring it, and doing my best to mask it with plants, yet still keep it uncovered enough that the fire department could get at it easily. This worked for a decade.

Then one day I came home from work and noticed that there was rusty water all over the street and the fire hydrant in the front yard had a red bag over it. Hmm. Then I remembered that the previous year, most of the other fire hydrants in the neighbourhood had been replaced, while the city was updating water lines. I had seen city crews digging gigantic holes in people’s front yards then, in order to replace the hydrants. It hadn’t occurred to me that our hydrant would meet the same fate.

A sense of dread descended.

I waited for a notice from the city about the work to be done but none came. As time went on I started to worry that crews would show up one day while I was at work and I’d come home to find the garden destroyed. If I knew when they were going to come I could relocate some of my plants and then put them back, but when were they coming?

After a couple months of worry I finally emailed my city councillor’s office. Lest they think I was concerned about nothing more than a few petunias or a little patch of lawn, I carefully crafted my email to mention that it was an “award-winning garden” (I’d been runner up for Best Garden of the District in the City of Toronto’s Great Gardens Contest a couple years before) and included a photo of the garden, angled to prominently feature the award.

Within a few days I was on the phone with a kind-sounding supervisor from Toronto Water. He advised that they would, indeed, need to dig a gigantic hole (not just the size of the hydrant, but big enough for them to put in reinforced steel panels to support the hole so that the workers would be safe!) but that he would with me to schedule the replacement so that I could remove my plants.

Argh. I understood that the workers needed to be safe. But a giant hole. Argh. Ah well, at least I’d know when it was going to happen so I could prepare.

We agreed to do the work in the fall, once the annual flowers were finished blooming (Did he roll his eyes at this request? I don’t know. If he did, he managed to sound concerned and pleasant and like it was a perfectly reasonable request from a homeowner.  I was never made to feel like my concern for my garden was even slightly over the top.)

Resolving to make the best of it, I dug out plants from the area and put up some snow fencing to try to keep the plants on the edges of the zone from being stepped on during the digging. I also made arrangements to work from home on the day of the dig, so that I could keep an eye on what was going on.

A day before the big dig, spray painted markings appeared to indicate where all the underground services were. 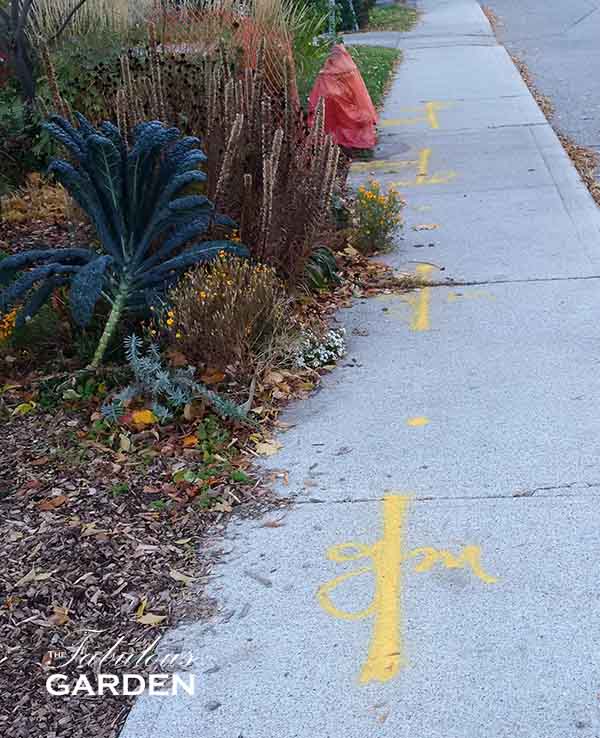 Seeing them go right through my garden caused another bout of anxiety. What about the serviceberry tree? Would it get dug up too? 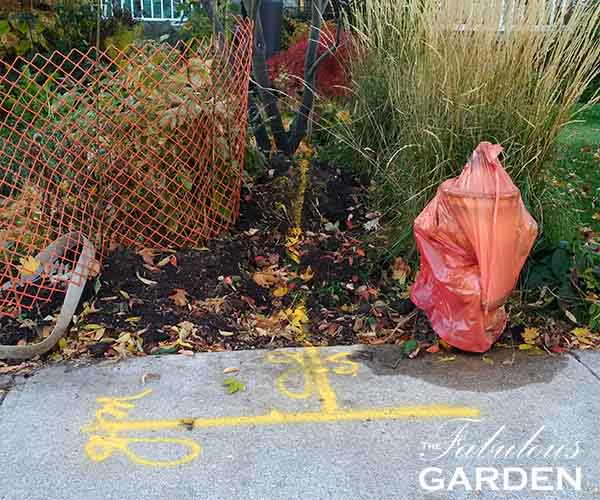 I was up very early the next day, baking muffins. I was going to do my best to make this go well.

As soon as the city crew showed up I popped out the front door with a plate of warm muffins and went to have a talk.

The crew was surprised, but appreciative. In between mouthfuls, they talked amongst themselves about the work ahead. There was a fair amount of muttering. 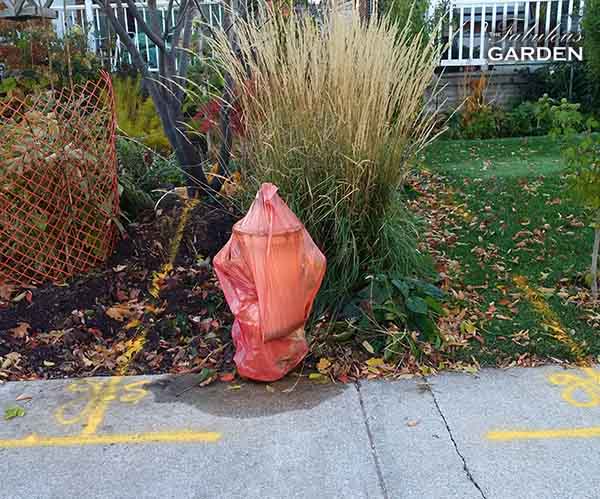 And then the crew leader pointed at the painted lines and said to me, “See those yellow lines on either side of the hydrant?”

“Those are gas lines for you and your neighbour. See the yellow line in front, along the sidewalk?”

I was so relieved! There would still be a big hole but it wasn’t going to be a gigantic hole! I thanked them profusely and went back inside.

I set up my work on the counter, by the window that overlooks the front yard (no pressure, guys).

Glancing up from my laptop every once in a while, I soon learned that this was the most careful group of workers I’d ever seen. They were almost surgical in what they dug up—no unnecessary areas were disturbed. It was astonishing to see how careful they were with my garden; before one crew member put a large steel plate onto the sidewalk, another bent over and carefully held back the leaves of the plants that were spilling onto the sidewalk, so that they wouldn’t be crushed. 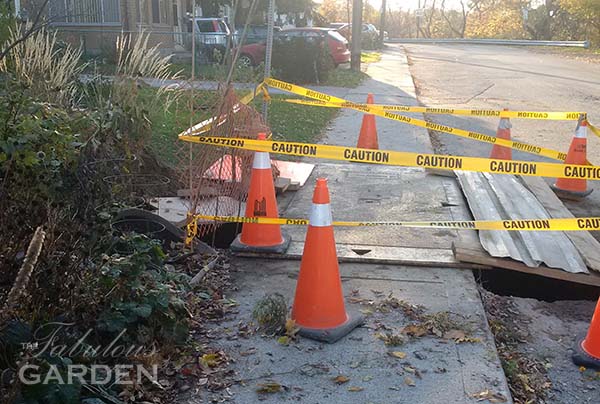 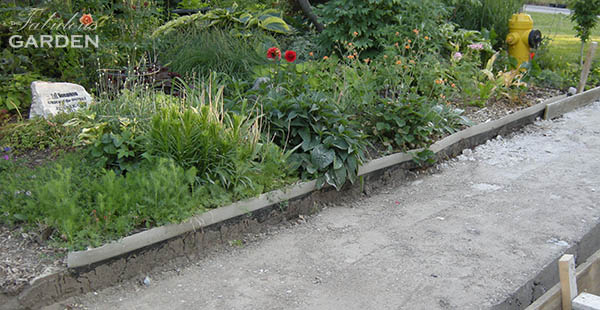 The entire sidewalk had to be removed, but you can see that even the plastic edging on the garden was left in tact. Remarkable. 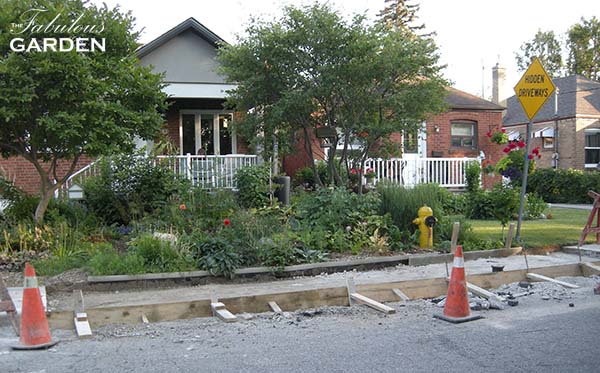 I know that not all city crews have a reputation for being so careful, but this group was awesome. After it was all over I sent to a note to my city councillor to make sure they were recognized.

And a year later, this is what the garden looked like. You’d never even know the area had been disturbed. 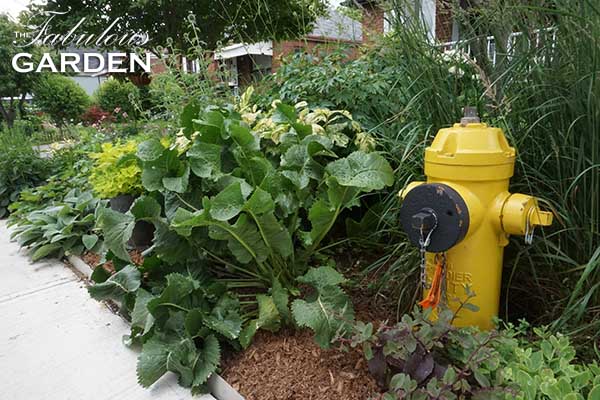 So that’s the story of my front yard fire hydrant. I thought it was going to be a nightmare but it was anything but.

I just I hope it doesn’t ever need to be replaced again!