Night blooming primrose (latin: Oenothera flava) is a really fun plant to have in your garden, as the flowers open right before your eyes! Individual flowers open at different rates of speed, taking anywhere from 30 seconds to a few minutes (and then there’s the odd one that gets stuck and doesn’t open at all.) And all the action takes place at dusk.

In our house we’ve nicknamed our Oenothera “the entertainment plant” as we will sometimes go out to the garden after dinner just to sit and watch it bloom. 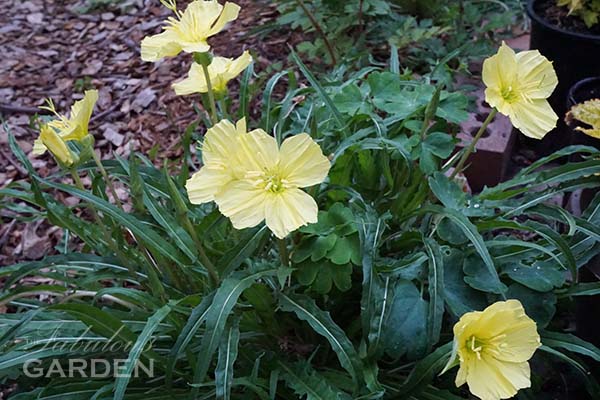 The blooms only last one night, usually shrivelling and fading to an orangey pink by noon the following day.

The leaves are shaped a lot like dandelion leaves. For that reason, I’m always worried about accidentally “weeding” it every spring, when it’s still small!

I did a stop-motion video of a few of our flowers blooming. Take a look:

I’ve read that this night blooming primrose is sometimes called Nine-O-Clock (because it blooms at dusk) or stemless primrose (because the flowers come right from the base of the plant, not off of a central stem). There are several varieties of night blooming primrose, some of which are taller than this one, and others that grow more like a creeper but have bigger flowers. I’ve had a couple of the other varieties but have never seen any of the others open this fast.

It’s a perennial plant in my area, and is listed as growing in zones 5 to 8. It likes full sun, but other than that, doesn’t seem too fussy.

I’ve also heard (don’t know if it’s true) that in Australia people place bets on which bloom in a patch will open, and how fast!

Have you ever grown this plant? What do you think about it? Please leave a note in the comments section below.

Update August 10, 2018: I’ve written a related post on how to save the seeds from Night Blooming Primrose