When I first started my garden, in the early 2000’s, I grew gorgeous oriental lilies that looked a lot like these: 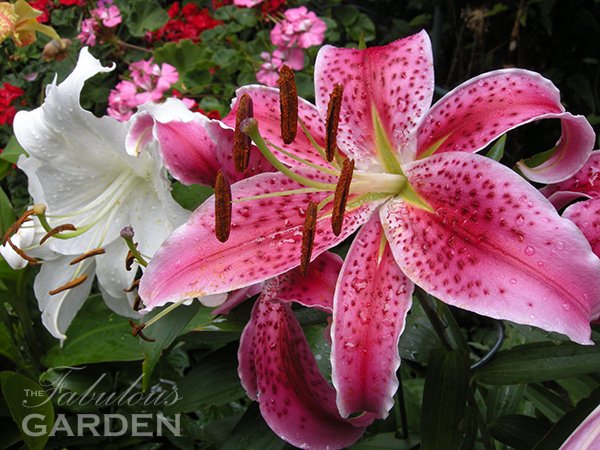 But these are not my lilies. I photographed these on a garden tour in Buffalo, New York last year.

No, my oriental lilies were all killed by the wretched Red Lily Beetle (Lilioceris lilii). 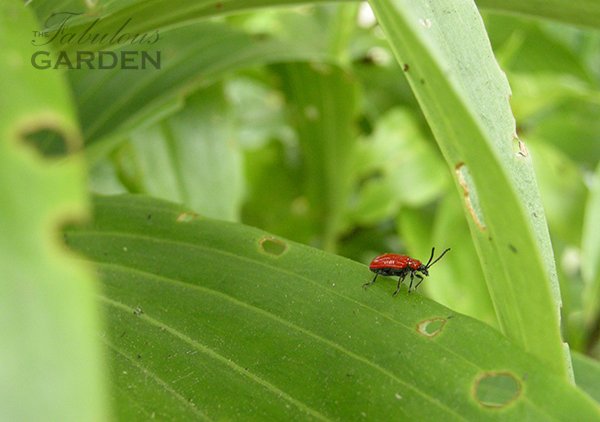 Red lily beetles, sometimes called Scarlet lily beetles, crossed my radar several years ago. First I heard about them as a rumour, seemingly exaggerated, of beetles that could actually kill off all the lilies in your garden!? Then there was the odd siting. And then, the infestation.

Holes in lily leaves, wrecking their appearance, and then, as the infestation worsened, the plants lost strength. A patch of 5 robust lilies came back the next year as 5 scrawny lilies, 3 the next, and perhaps one valiantly fighting, but ultimately defeated, plant the year after that.

A few beetles wouldn’t have been enough to do in a lily–they’re pretty sturdy plants–but the sheer quantity of lily beetles attacking them was too much.

And the reason there’s so many of them? To start with, they have no natural predators in North America to control them. Secondly, they are very prolific at reproducing. Often as not, when I find them in my garden they’re in the very act: 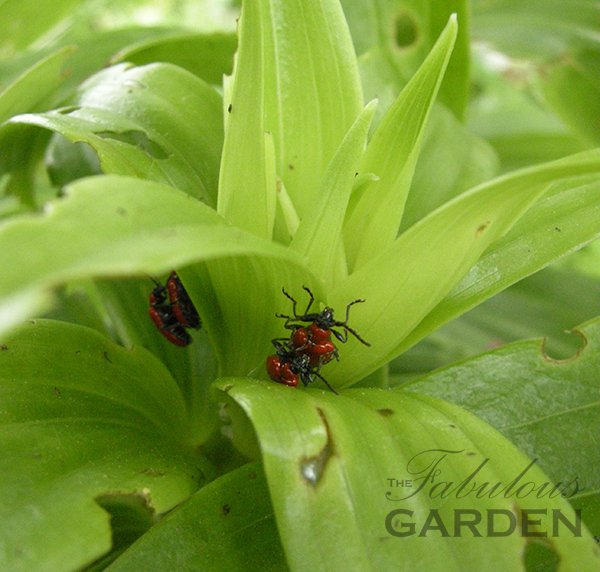 Add to that their gross but very effective method of protecting their eggs from any would-be predators: they cover them in thick black excrement.

Disgusting and destructive on so many levels.

The only really effective and legal way I’ve found to control them is to squish them by hand. But be warned, you have to grab them from below, otherwise they drop to the ground on their backs, and you can’t see them in the soil. I will confess that at the beginning of the gardening season I always put on a pair of gloves to kill them but, after a couple months, I’m so annoyed and desensitized that I just squish them bare-handed.

Gardeners were spraying their plants with Neem oil (which is derived from a tree that grows in India) in previous years and reporting some success, but the product was not officially registered with Health Canada (and therefore had not been tested for toxicity to humans, etc. etc.) so it was ordered off the shelves of garden centres in Canada a few years ago.

Other gardeners recommend dousing the soil around lilies with a mix of ammonia and water in order to kill the beetles that are overwintering in the soil. I haven’t tried this but the principle makes sense.

I’ve found that some lilies are more resistant to the beetles than others. To start with, daylilies are not affected by the beetles at all (this likely goes back to the fact that they’re not in the same plant family as true lilies, but that’s a gardener’s latin lesson I’ll save for another post). All of my oriental lilies died off from lily beetle attacks but I have one patch of Conca D’Or Oriental x Trumpet Lily remaining. 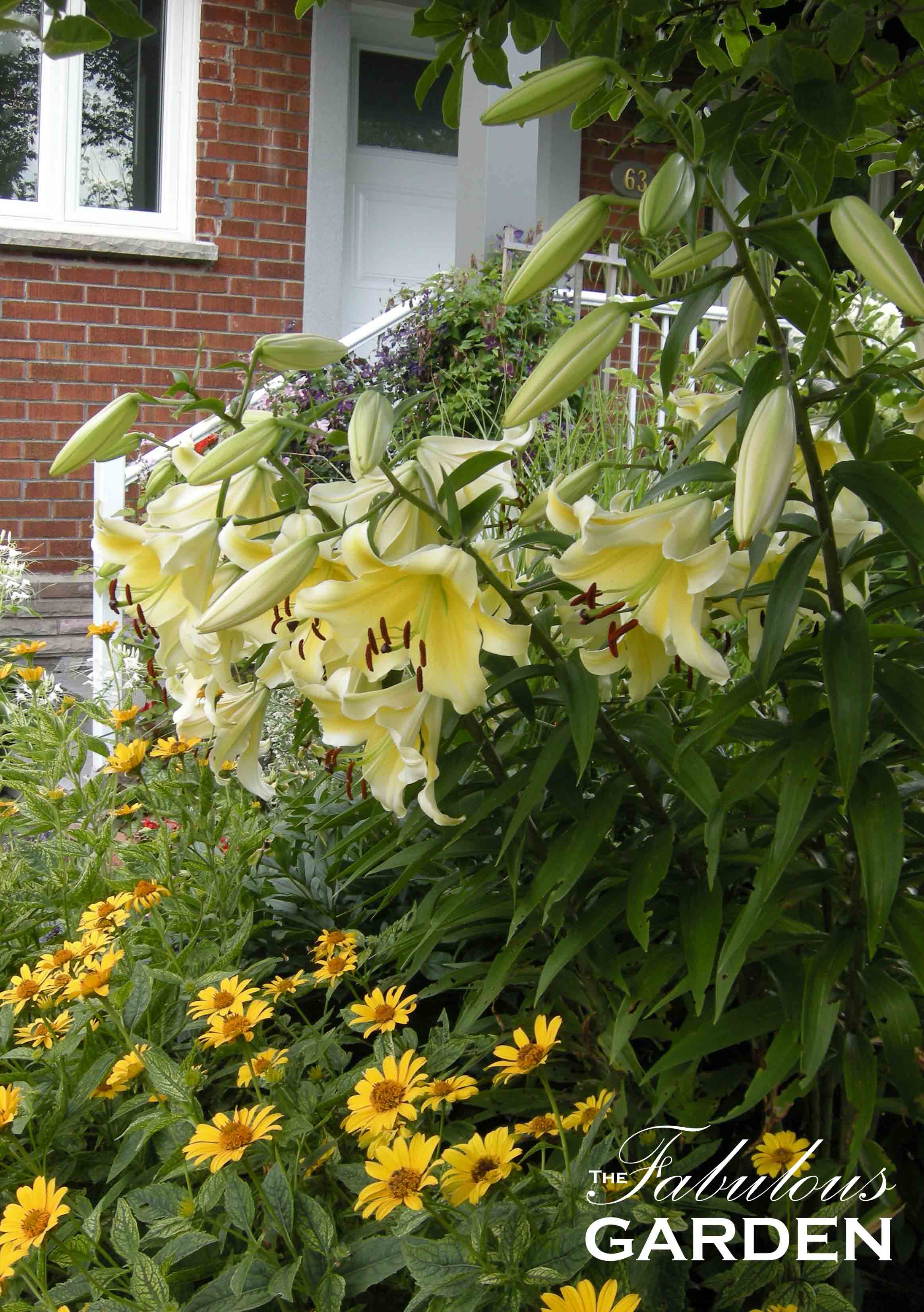 These are giant lilies (some sellers refer to them as “lily trees”) and, with diligent continuous monitoring and squishing, they have survived. I don’t think they’re as robust as they were before the lily beetles came along, but they still grow to 5+ feet, have lots of flowers and scent the neighbourhood wonderfully every evening during bloom time.

But I have to be diligent. The first red lily beetles appear in very early spring, even before the lilies emerge from the ground; I killed my first one on April 2nd this year. I encourage myself by remembering that for every one I squish I prevent multitudes of offspring–one online source I found says that every female lily beetle can lay up to 450 eggs!

Besides lilies, their second favourite food is Fritillaria: 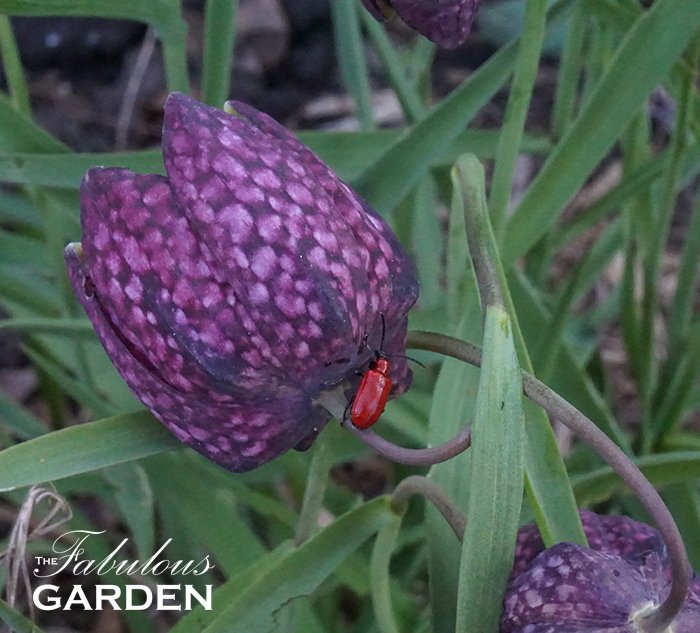 Again, with diligent monitoring and management I’ve been able to maintain a patch of Fritillaria meleagris for at least a decade. Some years they look better than others, but they have survived.