Catmint is a compact plant with small green leaves and small purple flowers that looks nice as an edging plant. Catmint is often confused with catnip. While they are related, as both are part of the genus Nepeta, one is grown to please humans and the other to please (and attract) cats. 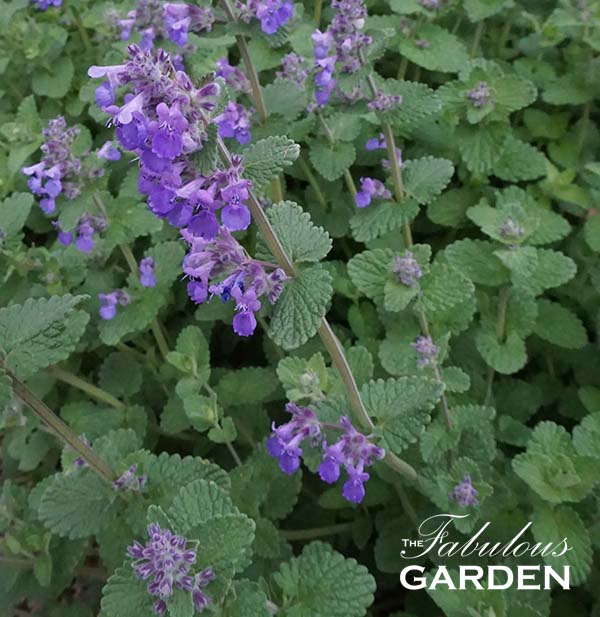 Catnip has much less attractive flowers than catnip, but the plant–in fresh or dried form–is intensely attractive for most cats. I’ve seen some neighbourhood cats show a bit of interest in my catmint, but it’s more of a “stop and smell the flowers” kind of thing. With catnip, the attraction is more of a fixation, with cats rolling in the plant and chewing it. It can be hard to get a new catnip plant established in the garden as I’ve heard of some cats actually ripping it out of the ground in their enthusiastic enjoyment of it.

I love cats but I’m not keen to have every cat in the neighbourhood in my garden, so I don’t even try to grow catnip. (My cats, which stay indoors, have to make do with the dried variety from the store.)

However, I do grow catmint in a bed along the edge of my asphalt driveway–it’s hot, the magnolia tree soaks up most of the moisture in that bed, and the soil along the edge isn’t great. But the catmint still does really well there. 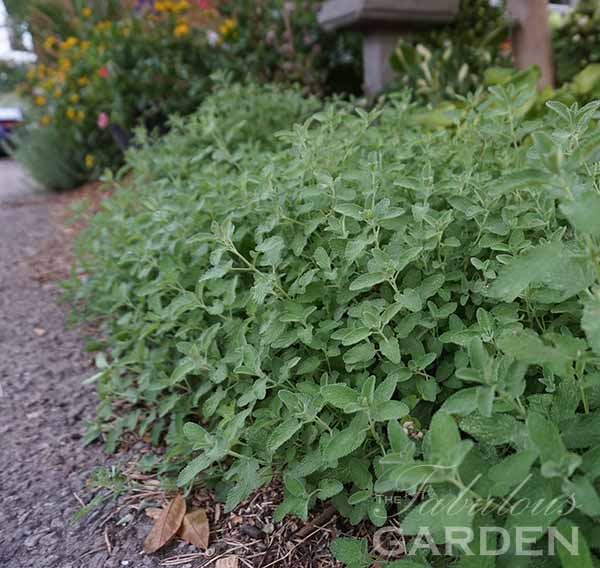 When it’s not flowering, it’s forms a neat, dense, low edging of green. When crushed, the leaves have a bit of a sage-like smell.  In June, the catmint starts to produce nice but small purple flowers. 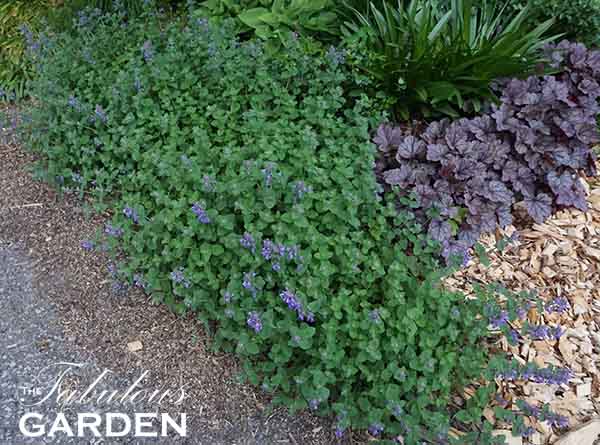 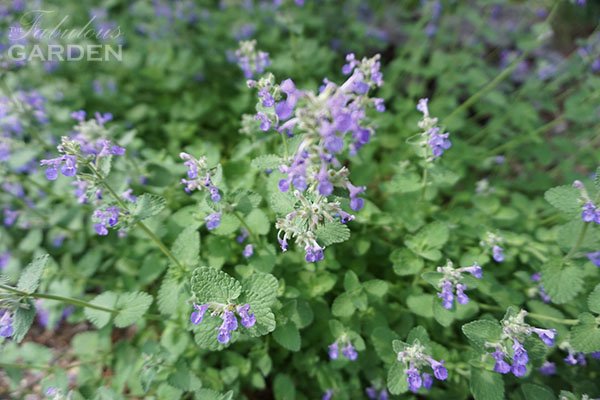 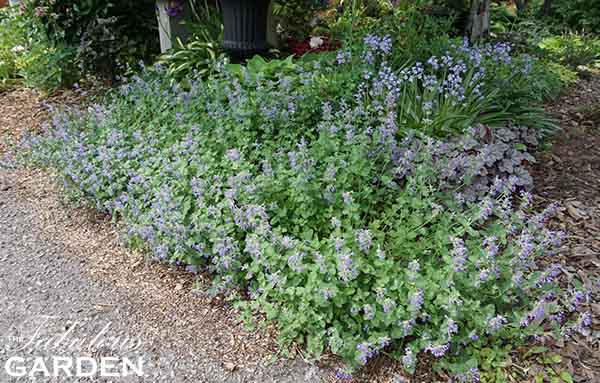 As the season goes on and the flowers mature, the colours fade, and the stalks get longer. At a certain point, I find it all looks a bit unkempt and weedy. 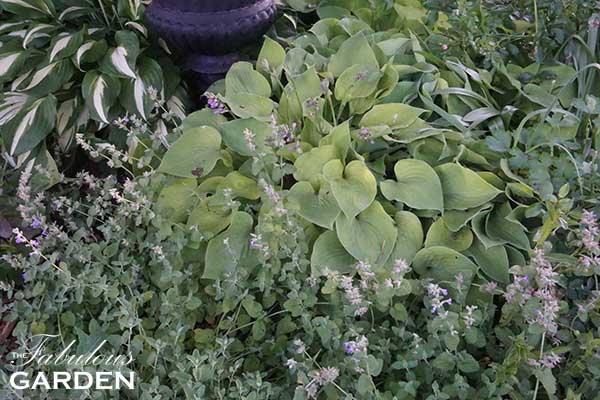 To Keep Catmint Looking Good, Cut it Back

That’s the point at which I get out my grass shears* (scissors or secateurs would work too) and give it a quick haircut. I’m not too fussy about the cuts, I just stretch out a handful of stems and snip them back to about 6 to 8″ of growth, repeating until the whole plant is trimmed back. In a few weeks it will fill out and flower again. I do this once or twice a summer.

Catmint doesn’t self-seed a lot, although it does produce the odd volunteer. But it is easy to make more plants. I like to divide my catmint in spring, as, like most plants, it recovers best then. But you could divide catmint right up until fall, as long as you keep the newly planted pieces watered. 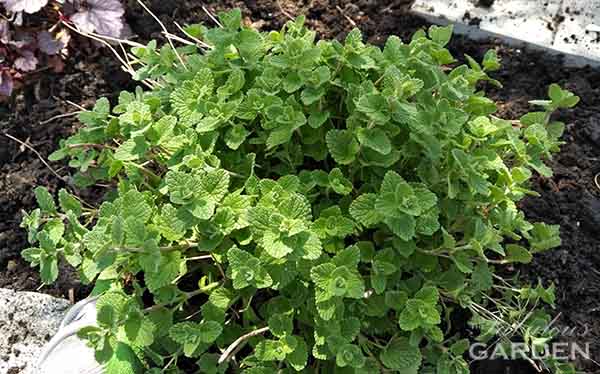 I start by digging up a plant and laying it on its side: 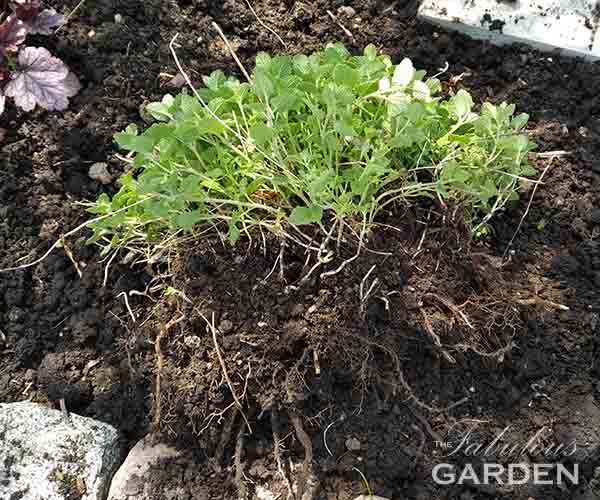 Once I do this, I can see that the single plant is actually a clump of many plants. The roots look quite jumbled together: 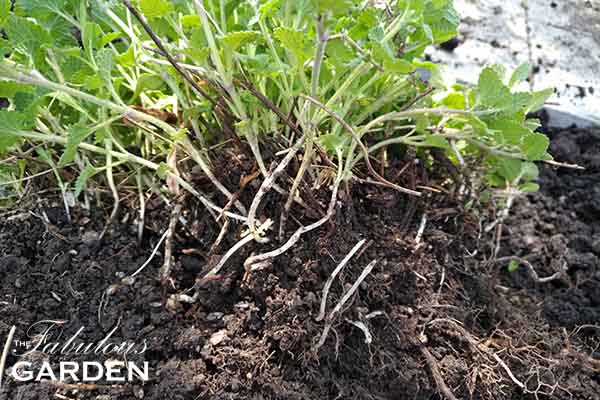 I gently tease them apart, and the individual plants come off quite easily. With catmint the dividing process is less of a tearing of individual plants from the clump (as is the process when dividing alpine strawberries) but more like unrolling a cinnamon bun. I just kept picking plants off the edge, working my way around the plant until I had as many little divisions as I wanted. 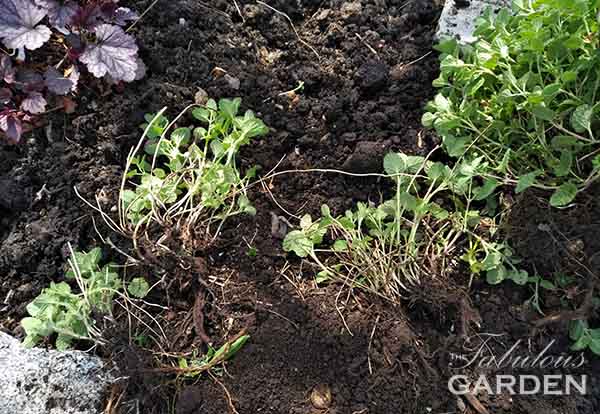 Eventually I had a number of small plants, which I planted back in the ground, and watered in. If I had wanted to share or sell some of them I could’ve put them into individual pots instead. In no time at all they’ll be settled in, and will likely bloom around the same time as the undisturbed plants.

Catmint is a very useful little plant if you have a sunny, challenging spot to fill. There are several varieties on the market and most are hardy in zones 3 to 8.