One of the first spring tasks in the garden is to remove the winter protection off of roses.

As I explained in my post on how to protect roses in winter, the recommended way to ensure that your roses make it through the winter intact (and note that I’m writing this for those of you who garden in places with real winter–this is not a post for my southern friends) is to cover them with rose cones and then apply soil or compost. I explained that there was a bit of trick to the timing–as you needed to wait for the ground to freeze to do this–and the same is true about removing that protection at the other end of the season. It should be done early enough that they haven’t started sprouting in their cozy insulated coat, but late enough that they aren’t at risk of being frozen solid by another icy blast of winter.

Once you figure out the timing, the task itself is simple and quick. Just take hold of the cone… 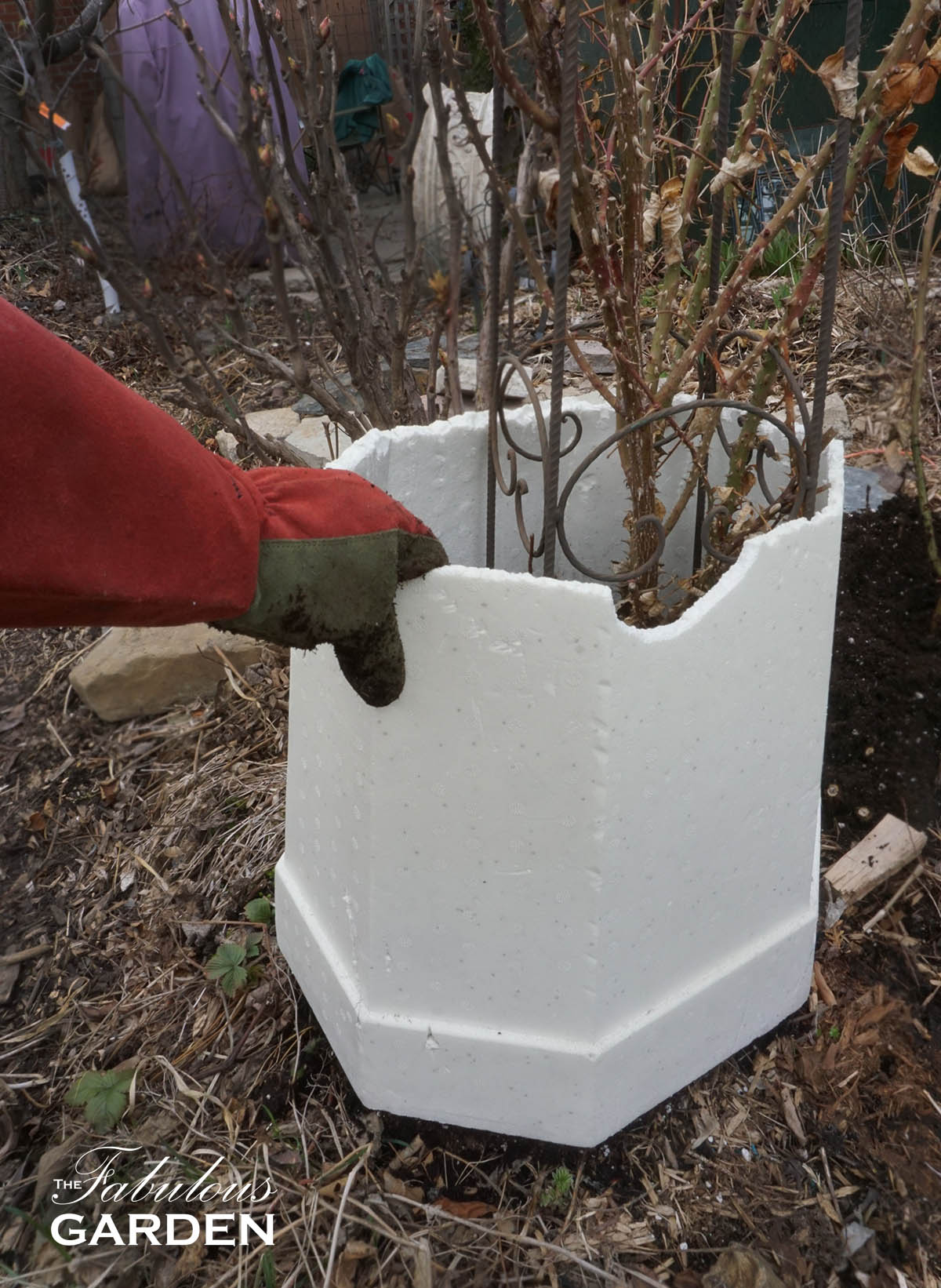 And lift it up and off the plant.

( Note that in the sample photo the rose is contained in a trellis; this is not necessary, it’s just how I happened to be growing that particular rose.) 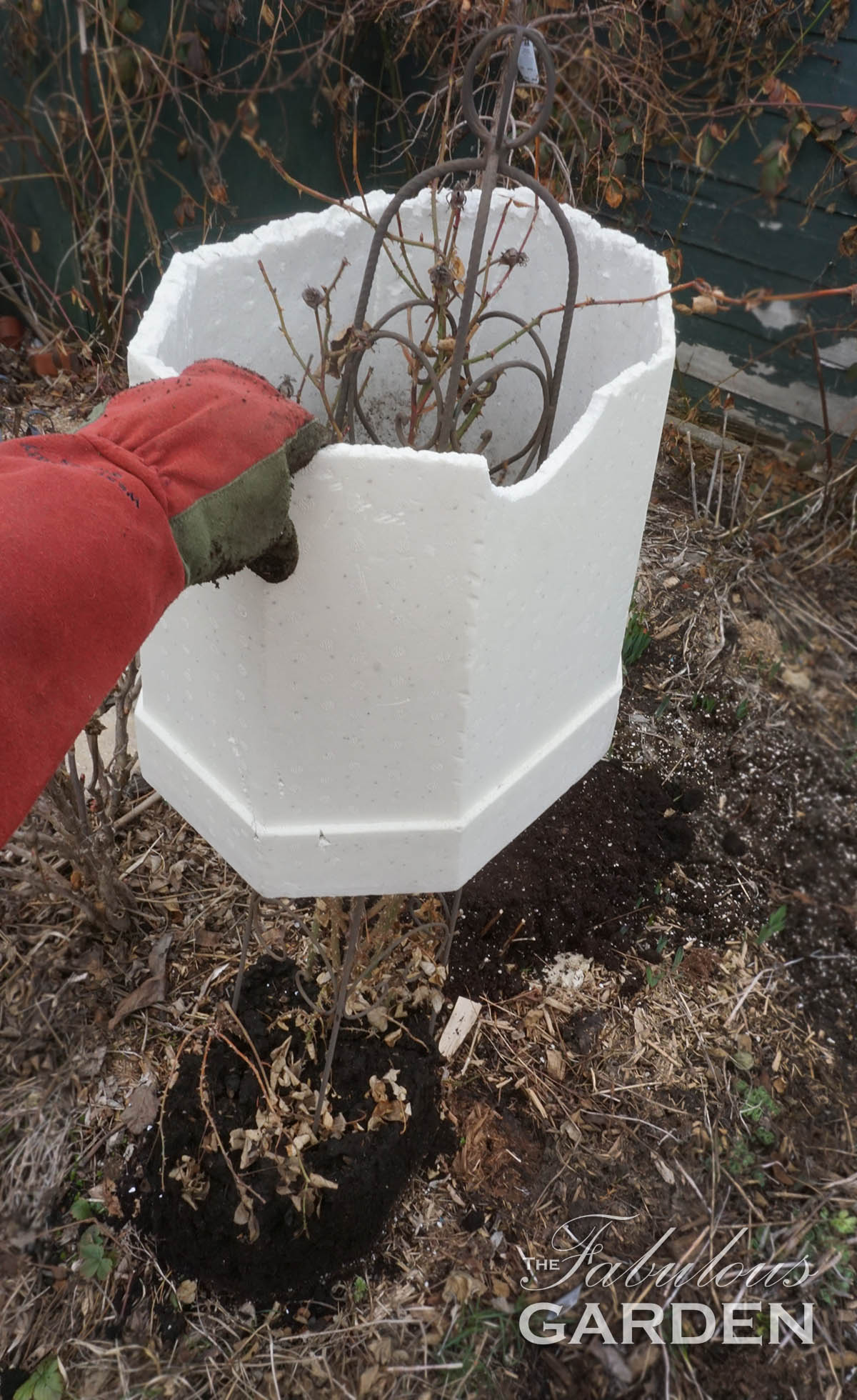 With the cone removed you can now pull the soil or compost back from the rose.

I was delighted to see, as I moved the soil out of the way, that the rose had not yet started sprouting, but its stems were green and healthy looking.

Pro tip: I wear my heavy rose gloves with the long cuffs to do this work, saving myself from many scratches. 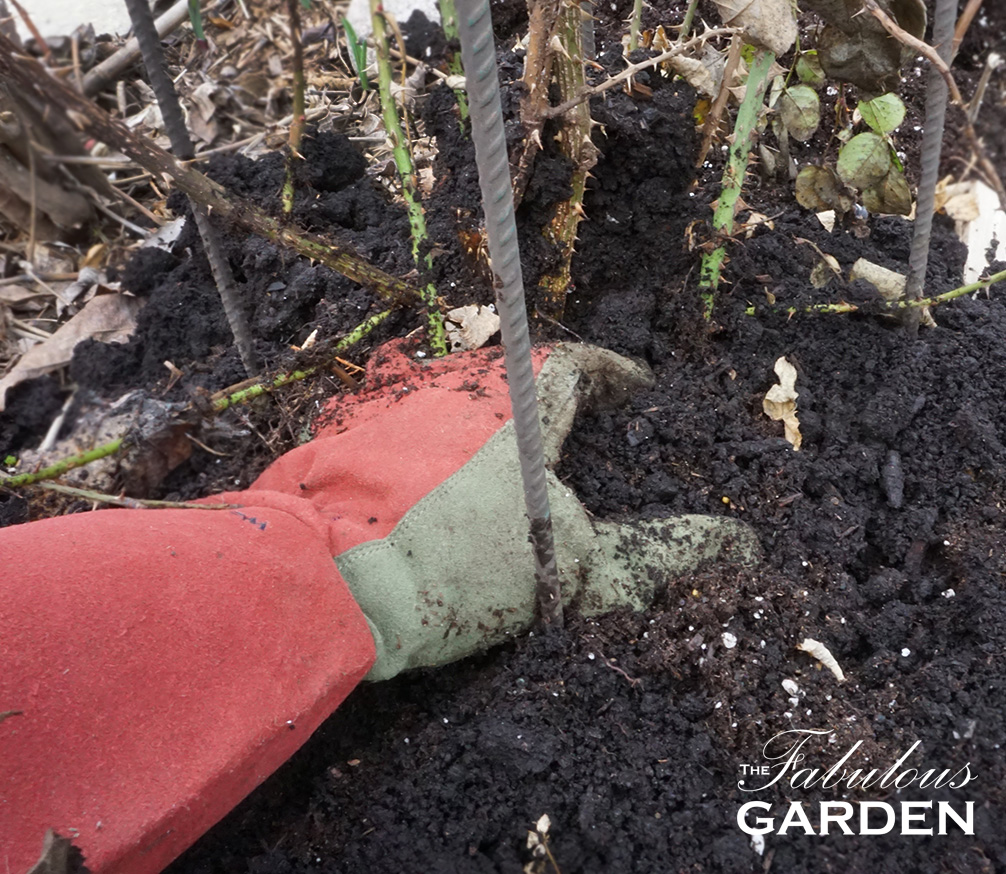 I pull all of the extra compost off the plant and spread it around to fertilize the rose and its neighbours. If you don’t want that much extra compost right there, you could scrape it up into a bucket, and use it in other areas of the garden. 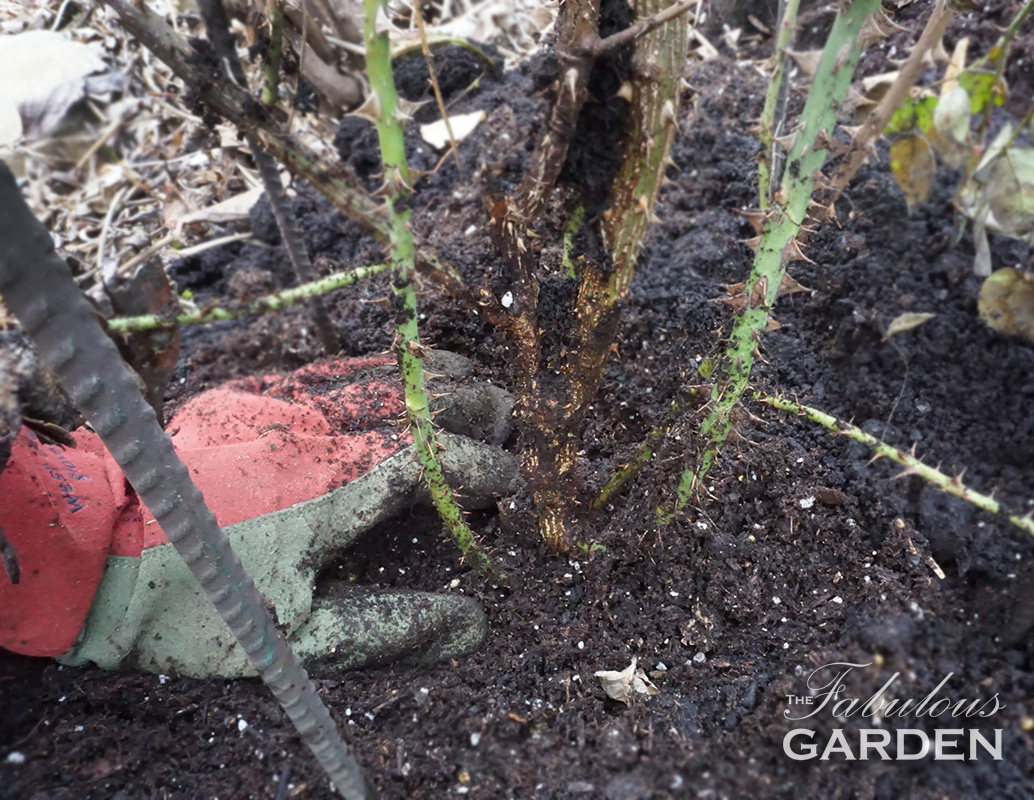 And with that, “remove winter protection from roses” can be checked off my spring to do list. The next rose-related task will be pruning, but I will wait until I see sprouts on the branches do that.

What else is going on in the garden now?

One of my pre-season garden tasks is to take the time to enjoy what’s happening in the garden right now. I took some photos so I could share some of the activity I spotted. 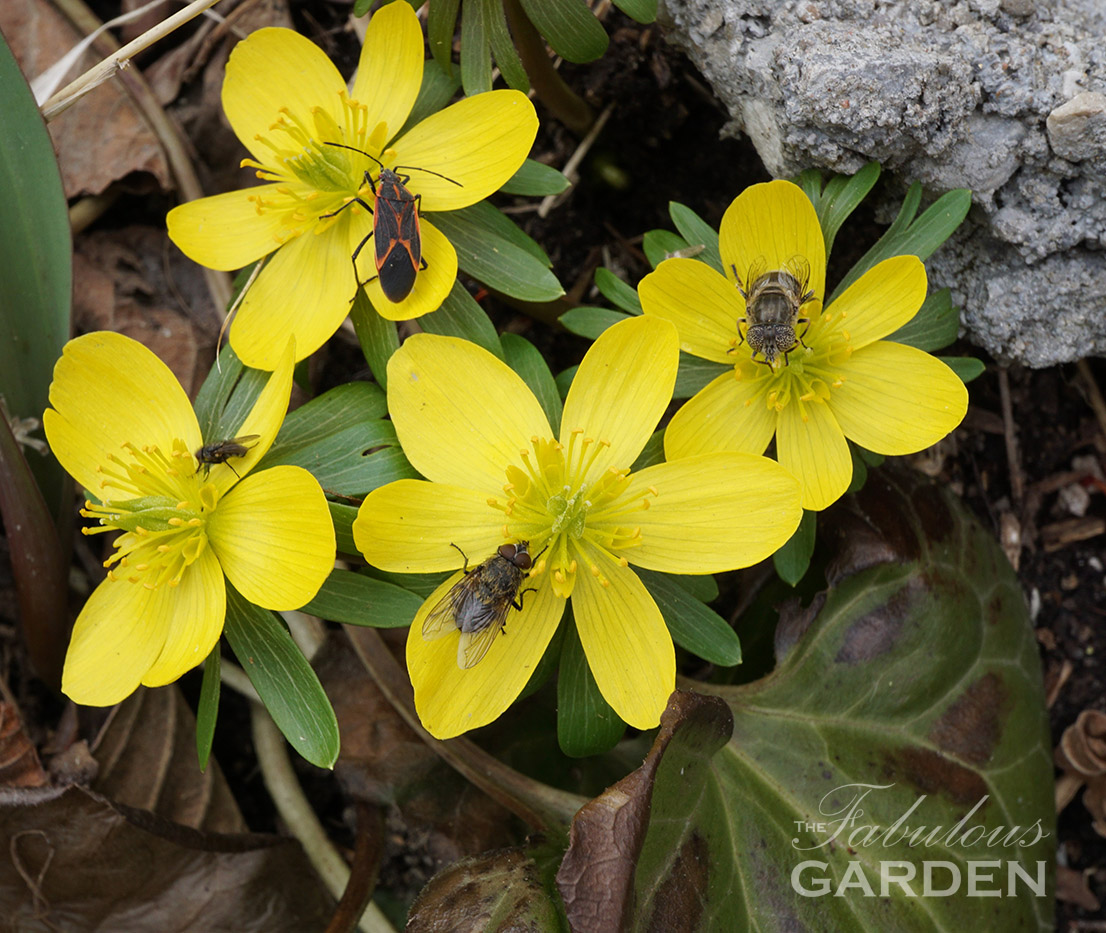 I have been told that the bug in the top left is a Boxelder bug (Boisea trivittata). Nothing I read about it online classified it as a pollinator or even a bug that was known to hang out in flowers, but there it was, rummaging around in the spring flowers, with a face full pollen: 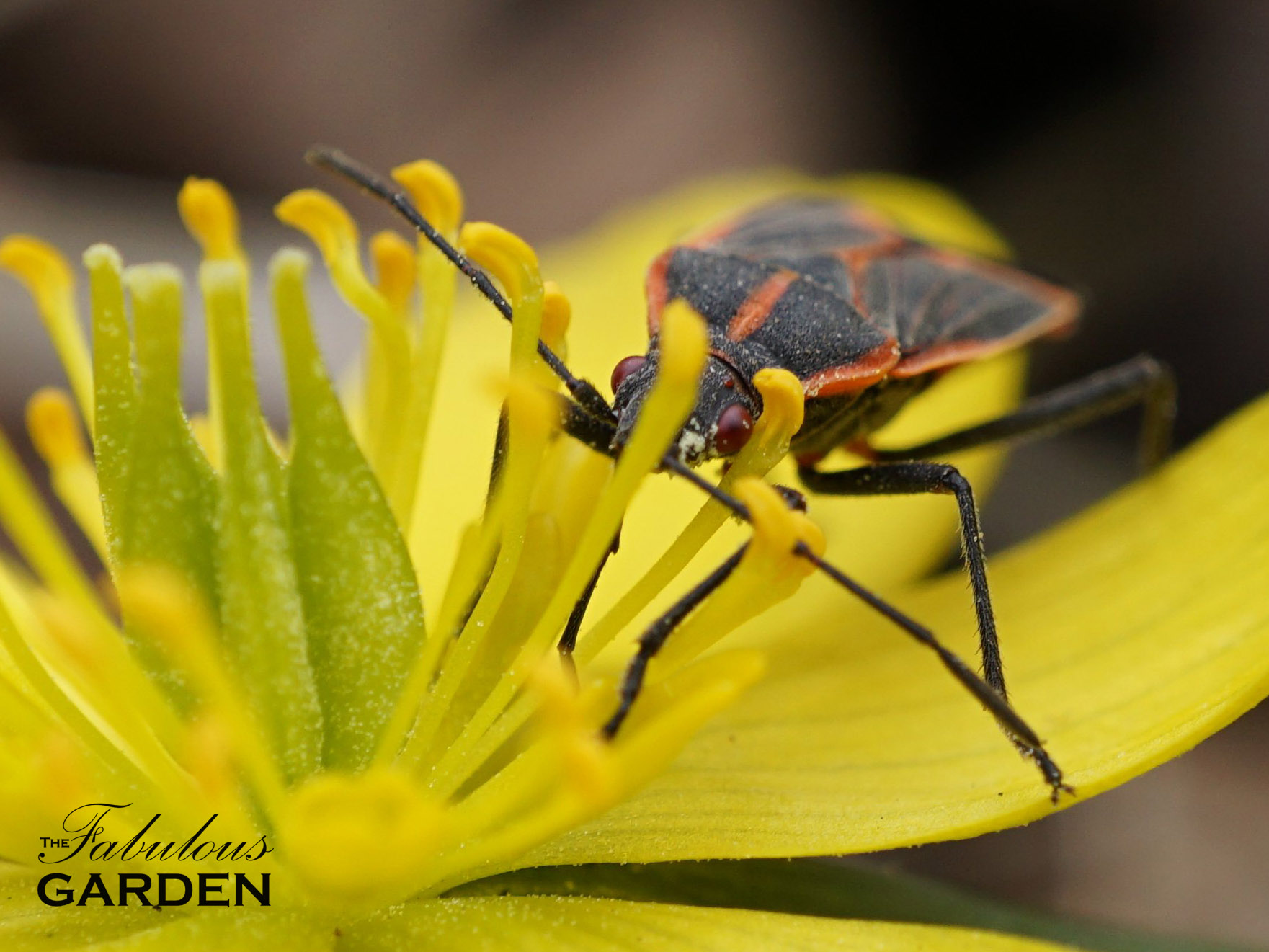 More expected, but no less striking, was this yellow and black striped insect (I have no idea if it’s a bee or a wasp): 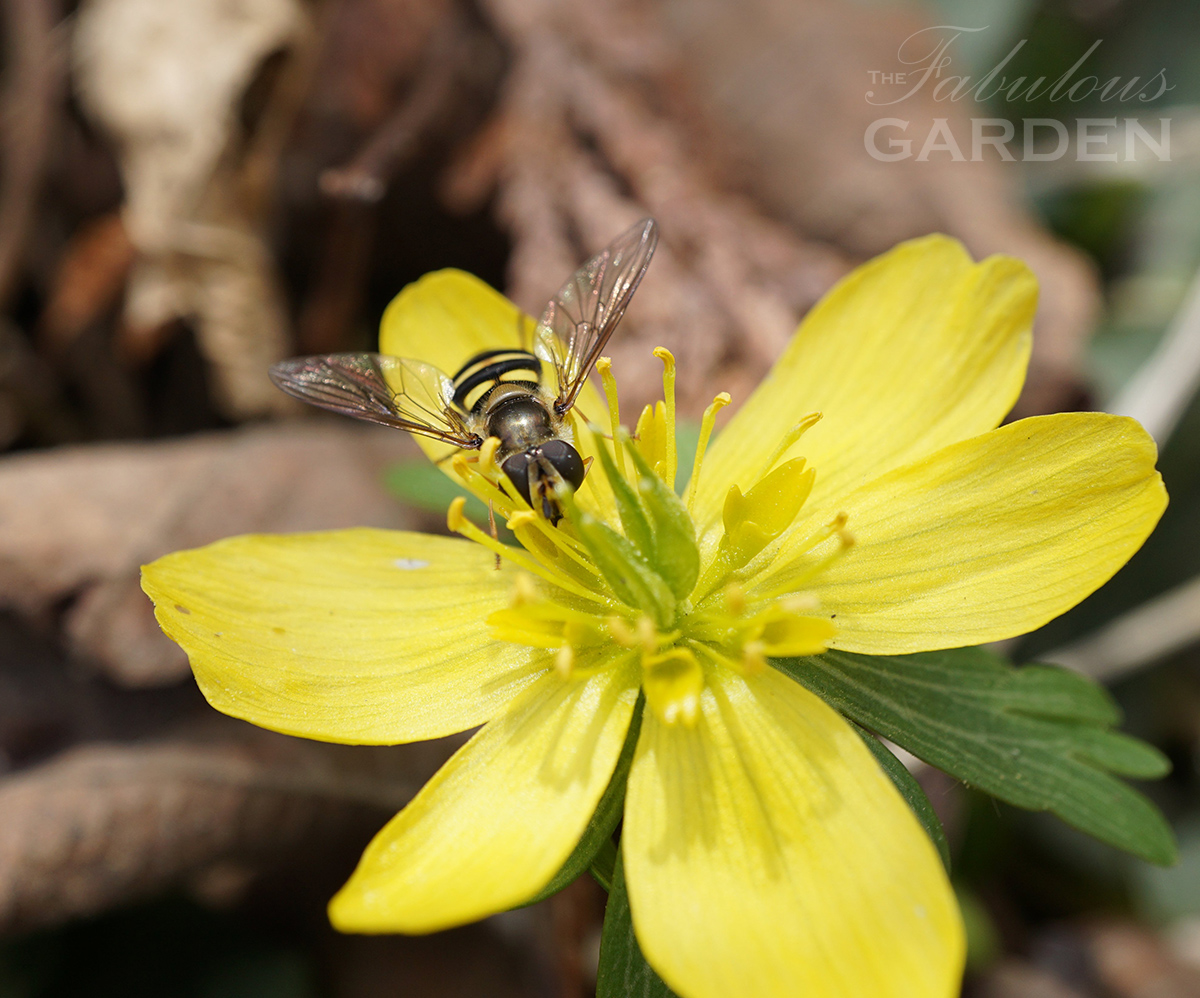 Flies can be important pollinators, and were not only found on the winter aconite but were also waltzing in the witch hazel (Hamamelis × intermedia ‘Diane’): 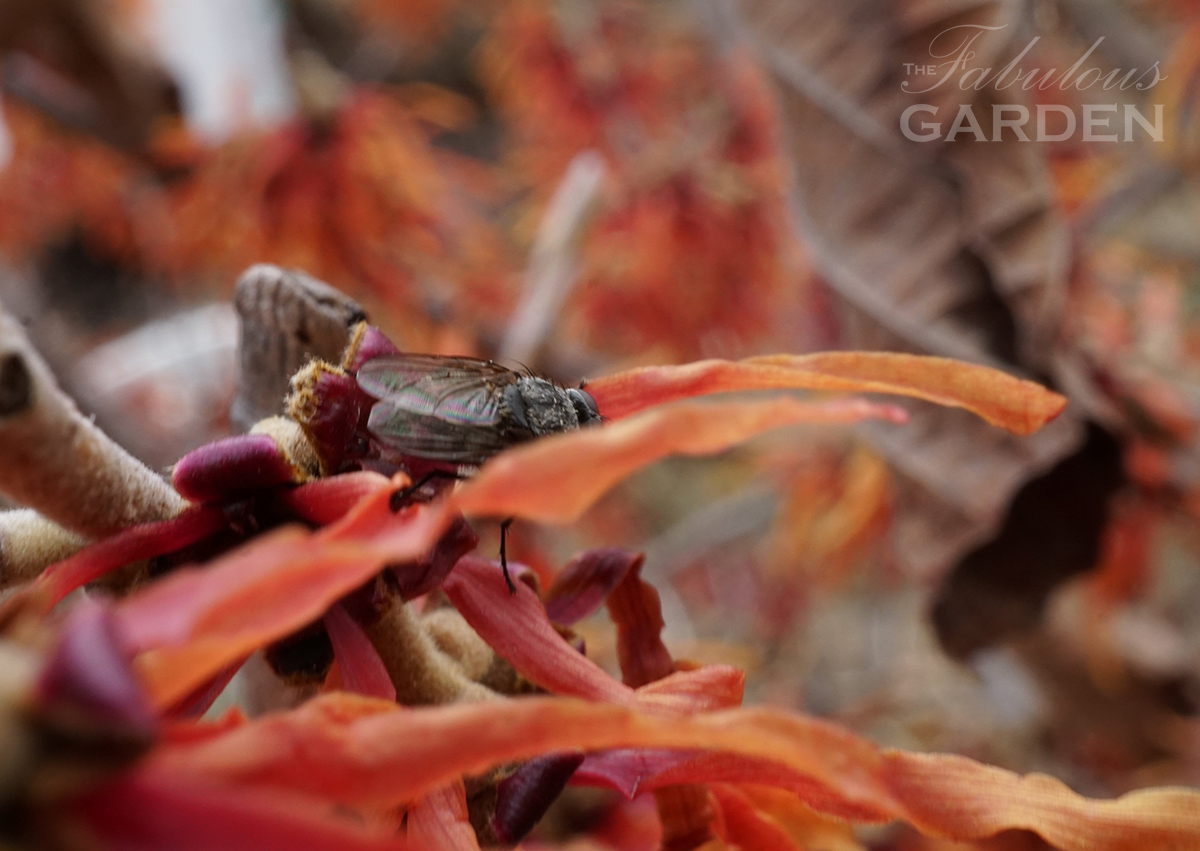 This variety of witch hazel has the most amazing blooms–they’re like upside down flames: 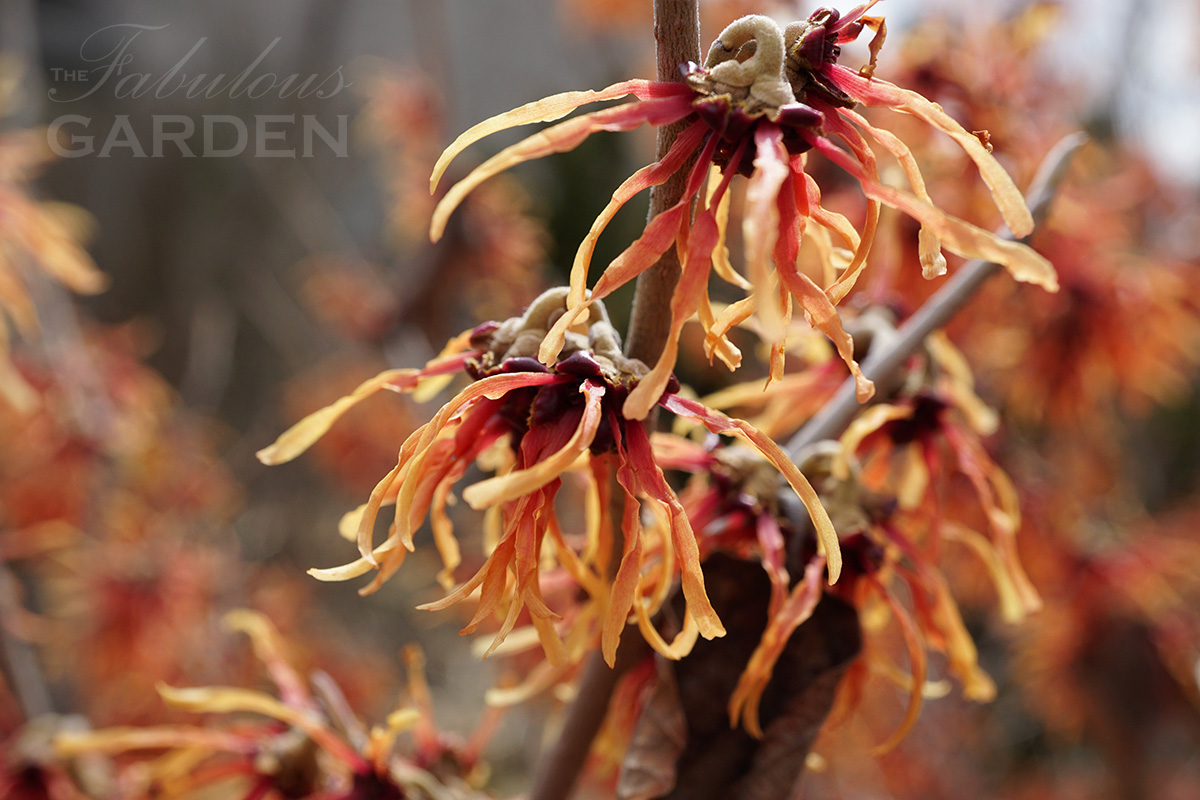 Also in bloom, but being quieter about it, was one of my few spring flower irises (Iris reticulata). They’re tiny and delicate looking but, as you can see, very early to put on a dramatic show: 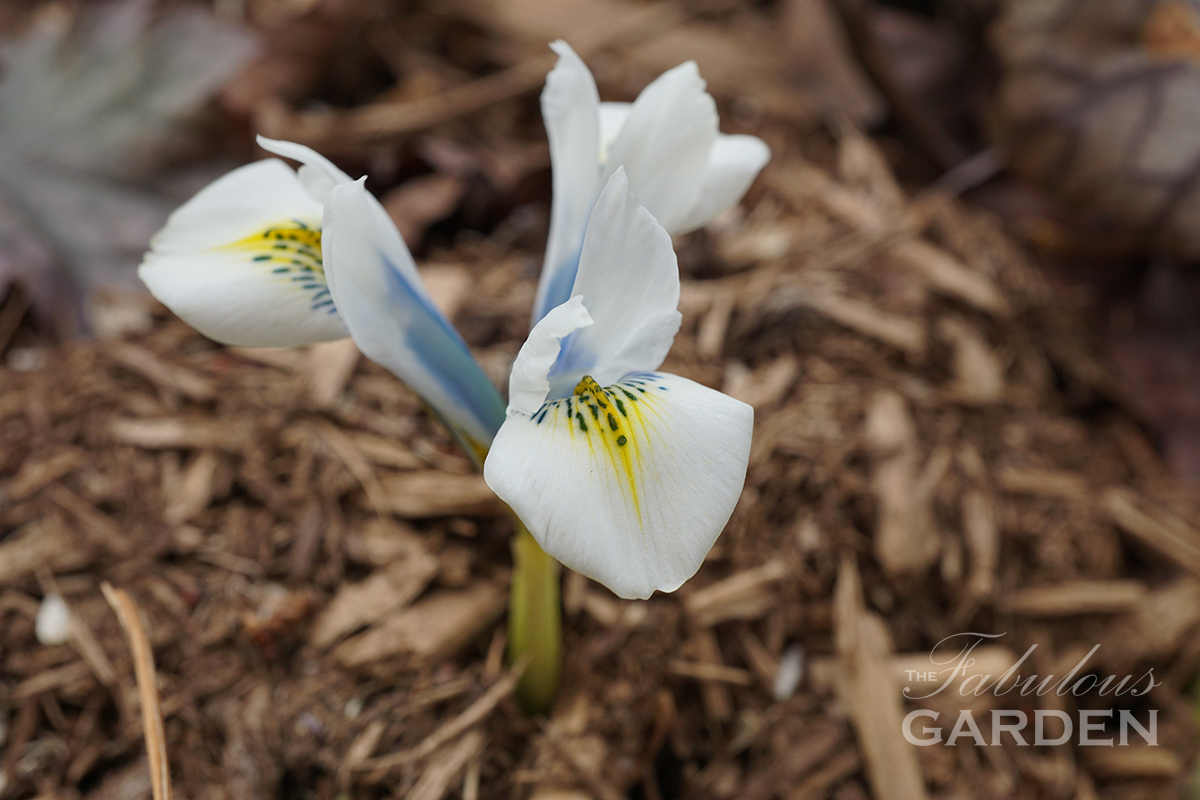 Reticulated irises are related to the Bearded irises and Siberian irises that will emerge later and bloom in June, but are a fraction of their size. Interestingly, one of the most globally recognized breeders of these irises is a Canadian, Alan McMurtrie. I purchased these bulbs from him when he spoke at my horticultural society a few years ago–it was amazing to hear someone who had devoted so much of his life to developing one species, and was doing it with such a high degree of skill, passion and precision. While my iris haven’t multiplied as much as I’d like–probably because I haven’t figured out their preferred spot–they have been a delight to see every spring.

What’s going on in your garden right now? If you wish there was a little more action than you have now, consider making a note to plant some winter aconite, iris reticulata or other bulbs (snowdrops and crocuses are also blooming right now) next fall. Or see if you have a good spot to put in a spring-blooming witch hazel–they’re a fairly large shrub, but you can keep them to a manageable size through pruning. As far as I’m concerned, the earlier the season gets going the better, and it also helps those hungry pollinators.