Today’s post isn’t something that everyone is going to be able to use right away, but it’s handy information to know and file away in your brain, in case you need it in future.

A month or so ago I noticed a branch on my Japanese maple that looked different from all of the other branches in three ways. 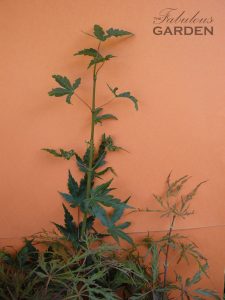 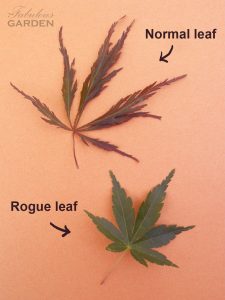 I knew that if I left this branch in place I’d have a problem. This video will tell you why and what I did about it:

It seems that the problem with my Japanese maple was that it was reverting to the rootstock that it had been grafted onto. Grafting is a very common practice with woody plants—especially roses and small trees. It’s a bit of Frankenstein magic where the top part of a plant is joined onto the roots of another plant. This is done for a few reasons, usually because the root stock is hardier (i.e. more able to handle our winters) than the part of the plant on top, or because the root stock has a desirable characteristic (faster or slower growing). I had no idea my maple was grafted when I bought it—it was only when the rogue shoot emerged that I noticed.

I had to get rid of the rogue shoot because if I didn’t it would have taken over the entire tree. In a season or two the downward arching branches would have still been there, but they would have been outnumbered by many more vigorous upright branches with green foliage. Likely a nice tree, but probably much larger and not the look I wanted in that location.

Now that I know this tree has a graft and it’s tried to sprout once I will need to keep an eye on it in case more emerge. I tried to trim the rogue shoot as close to the tree trunk as possible, but because of the angle it was growing it wasn’t as clean of a cut as I would have liked. In future posts I’ll talk in more detail about pruning unwanted branches, but for now know that if you have a rogue branch you want to cut it as close to the trunk as possible. 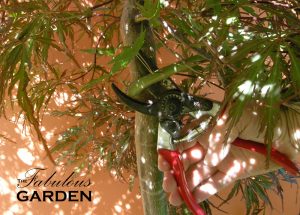 The situation described above doesn’t just happen with Japanese maples. If you have other plants that are grafted and notice a branch that isn’t like the others, you may have the same problem. Keep an eye out and your secateurs handy!