My garden has entered that late summer stage where, as far as flowers go, it’s all about the dahlias and the black-eyed susans. Rudbeckia triloba (my favourite form of black-eyed susan) has self seeded in several places (not all of which are convenient, but I let it go anyway) and it certainly must be one of the cheeriest flowers on the planet. 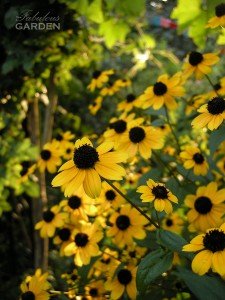 And as far as the vegetable garden, it’s all about the tomatoes (yum and yay!) and zucchini. This year I tried out ‘Trombeta di Albenga‘ a climbing heirloom Italian variety. To say that it is a vigorous grower would be an understatement–I think the vine is somewhere between 12 and 15 metres long now. And the zucchini! Well, take a look…

If you grow the more conventional zucchinis (the smaller green or yellow ones) you might think I’ve left this on the vine far too long, but I consulted with a friend whose family has grown these, and she assures me that they are indeed supposed to be allowed to get this big. In fact, I received a little talking to when I picked one “too young.”

The first mature one that I grated (in order to bake with it) measured in at over 7 cups! Time to get baking! 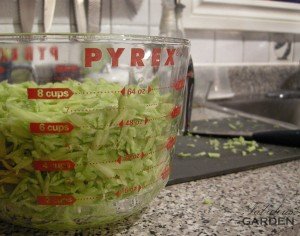 So I went in search of a good zucchini bread recipe.

I tested several (with my coworkers and my husband, and even my husband’s coworkers) and found they were either too oily, too cakey, or just not the right bread-like consistency I was looking for.

I wanted something with a texture like banana bread, not coffee cake. So I took the most similar recipe in my collection and started modifying…and finally (after stuffing myself and everyone around me with many “failed” but tasty tests) came up with a recipe that’s pretty much exactly what I had in mind.

If you’re looking for a great zucchini bread recipe, here it is: 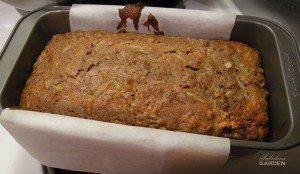 Heat oven to 350’. Place a piece of parchment paper crossways in the bottom of each of two non-stick 8 x 4” loaf pans.

In the large bowl of an electric mixer, beat eggs until thick and lemon coloured; gradually beat in sugar. Add in oil, orange juice, vanilla extract, and zucchini. In separate bowl place all dry ingredients, combine with a whisk, and then stir by hand into wet mixture until everything is well mixed.

Pour batter into pans.  Bake for approximately 50 minutes or until cake tester inserted in center comes out clean. Cool completely. Use a flat spatula to release loaf from ends of pan; lift loaf out by lifting on edges of parchment paper. Store in a sealed container. Freezes well.

And if you have as much zucchini as I do…repeat all of the above!

This article was originally published September 3, 2011 on jenniferarnott.com, my old blog. Because it was a favourite post, it’s been migrated to TheFabulousGarden.com