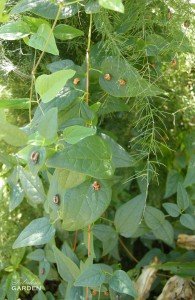 In late August I was walking through the front garden and something caught my eye. There were alien-like creatures clinging to the clematis and asparagus…

In fact, it was a group of ladybugs (which, according to Mr. Google, is a loveliness of ladybugs), moving from the larva to pupa and adult stages! Ladybugs start out as little yellow eggs.  They then emerge from the eggs as larva. They go through a molting period, and then turn into pupa. And finally, they are full adult ladybugs.

Apparently, this is a quick process, since three of these stages were on display right in this one little patch of my garden. 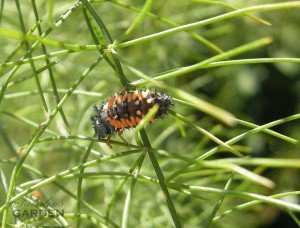 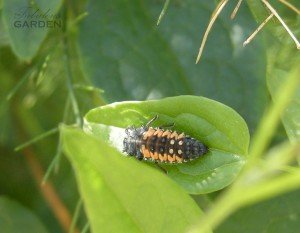 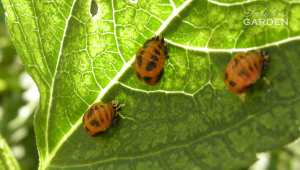 Three ladybugs in the pupa stage 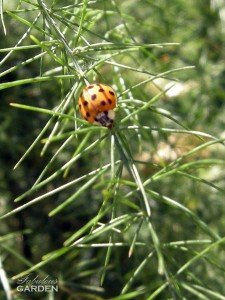 Up until this spring, I wouldn’t have recognized what I was seeing. But fortunately I attended a talk by Martin Galloway (former host of Secret World of Gardens–a fabulous show that you might be lucky enough to catch on reruns) at our horticultural society this spring, and learned to recognize the larva stage of a ladybug.  There are so many neat things to see in a garden, once you learn to look! 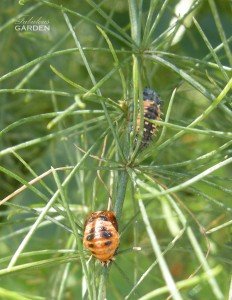 Larva on top, pupa below

This article was originally published October 6, 2013 on jenniferarnott.com, my old blog. Because it was a favourite post, it’s been migrated to TheFabulousGarden.com

← How to Make a Wreath Out of Fresh Greenery (updated)It’s too early for bees, isn’t it? →