I grew an orange variety of Cosmos flowers, called ‘Bright Lights’, and I’ve been loving their vibrant blooms! I had only grown the white ones up until a couple years ago. I didn’t know that there was an exciting cosmos world beyond the white and the pale varieties, but then I saw ‘Bright Lights’ and was smitten.

They bloom frequently and plentifully, from early summer until frost: 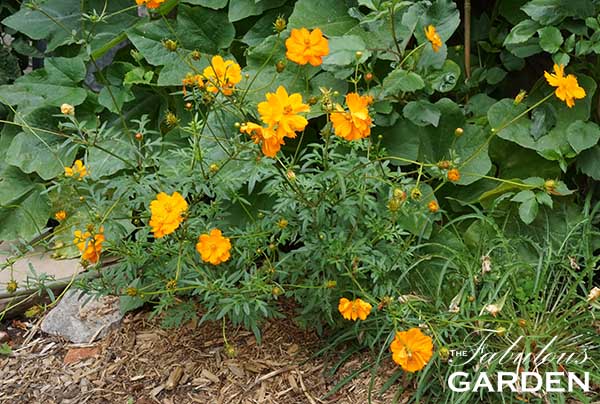 The way to keep them blooming so prolifically is to cut off the finished, or ‘spent’ blooms, so that the plant puts its energy into making more flowers, instead of into making seeds. This process of deadheading is straightforward, you just cut off the flowers that are done.

How to Deadhead Cosmos (and a lot of other plants) 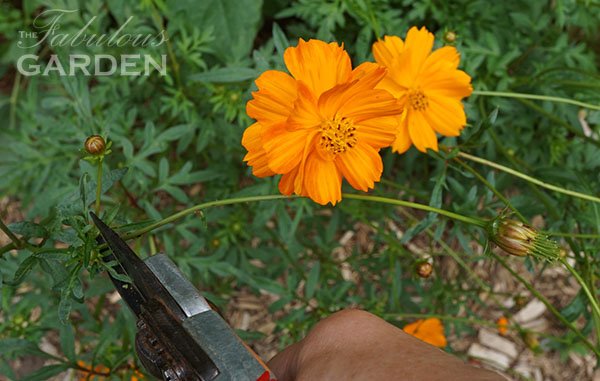 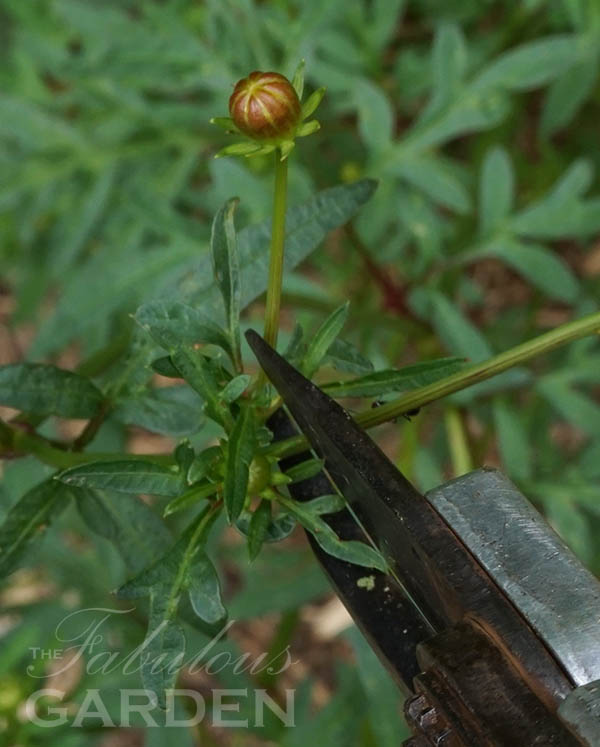 It’s better to cut too high (and leave a bit of stem) than to not cut off spent flowers at all. So if you’re caught out in the garden without a pair of secateurs or scissors and you see some spent blooms, just snap the spent flowers off. It will stop the energy being diverted into seed production. You can tidy up the stem stubs the next time you go by with some secateurs.

One thing that sometimes confuses people is figuring out the difference between an unopened flower bud (an emerging flower) and a spent flower (a flower that’s done). They do look a little bit similar, but they are easy to tell apart once you know what to look for. 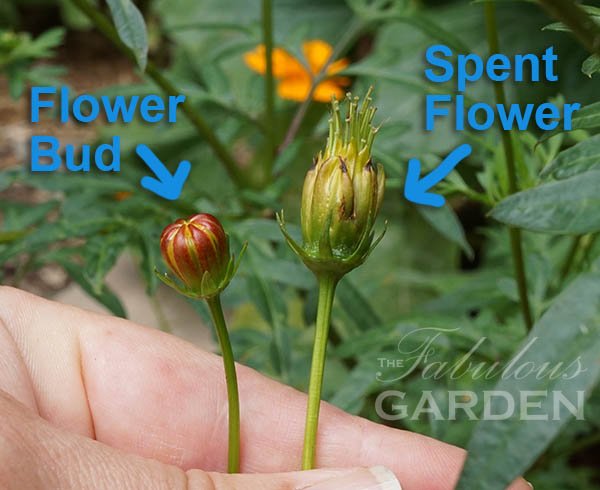 The flower bud shows some colour (if your cosmos flowers are white, expect the colour that shows to be white, not reddish like my ‘Bright Lights’), and look like they’re swelling and about to burst open. Which, truthfully, they are.

Spent flowers have less of the flower colour (more green and brown), and have spikey bits (stamen) protruding out of the top. When compared to the bud, it looks like it’s been to the celebration, blown its party horn and now its winding down.

The contrast between the two also clearer even with buds that are further along and starting to open: 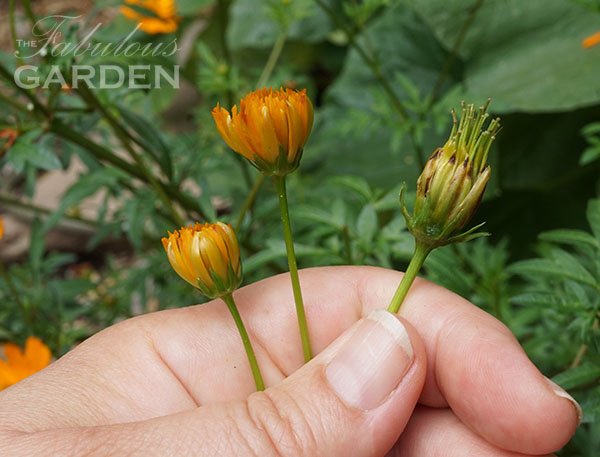 The far left bud is just starting to open, the middle one is really starting to look like a flower, and then, on the right, is the spent flower head.

So snip off all of the spent flower heads often. Your plant will look tidier, and it will bloom more: 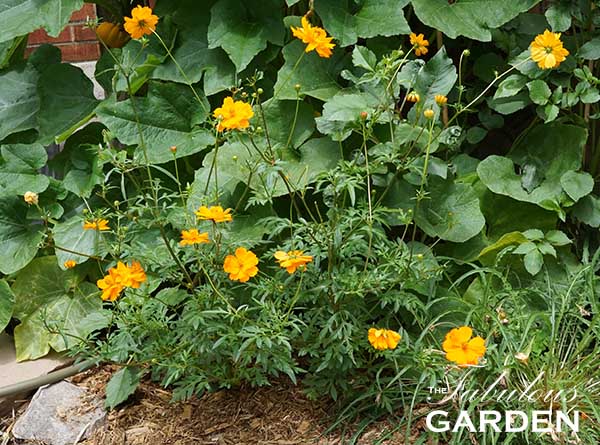 I hadn’t deadheaded the cosmos pictured in about a week so I ended up removing a good handful of spent blooms: 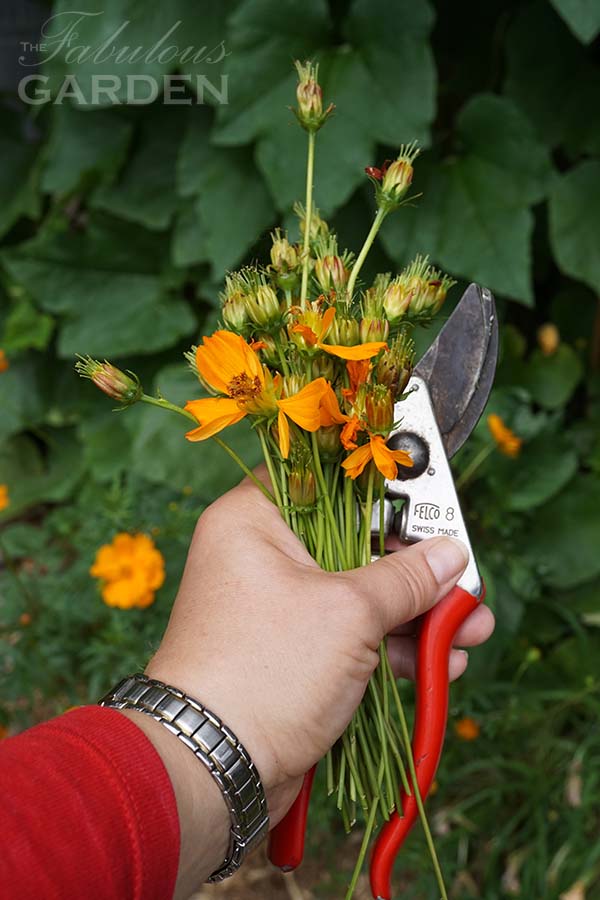 I thought they were kind of pretty, so I left them lying on a little table I have by my potting shed for a couple days instead of putting them straight in the compost. The next time I looked at them I  noticed that they had changed as they dried out.

The spent flowers, fully fertilized by the many bees and other pollinators in my garden, had opened up to reveal their seeds. You can understand why spent flowers are sometimes referred to as “seed heads”. 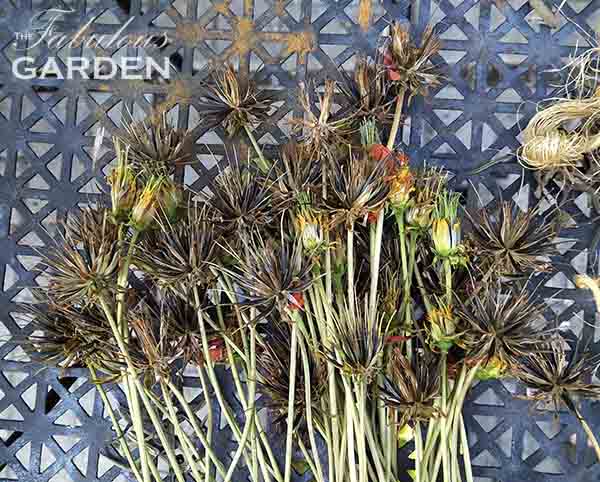 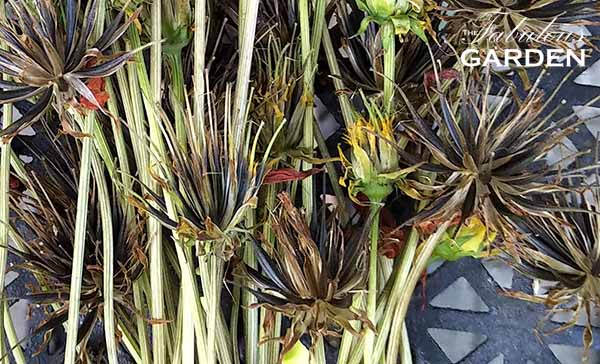 If you want to save seeds for next year, you are best to let a spent flower mature (i.e. don’t cut it off until it starts to dry out and get more brownish than greenish), and then cut it off, not cutting off semi-ripe and ripe seedheads like I did.

When I’m collecting spent flowers for seedheads, I cut them when they’re mature, and put them in an envelope or paper bag in a dry space. Once they’re  completely dry they will open up like the seed heads above, and then I shake out the thin black seeds into an envelope to use next year. The seeds are black, a little bit shiny, and quite long compared to the seeds of a lot of other plants.

Cosmos Seeds Need to Be Fresh

One other thing about cosmos seeds is that I learned this year how important it is to have fresh seeds if you’re trying to grow them yourself rather than buying little seedlings (baby plants) from a nursery. Seed for some plants, like tomatoes, seems to remain viable for quite a few years, but that isn’t my experience with cosmos.  I had an opened packet and an unopened packet of cosmos seeds from a couple years ago. In March, I tried to germinate them but they would not sprout, no matter which method I tried. As we were in lockdown, I was concerned I wouldn’t be able to get more seeds, but I happily found one packet of  Cosmos ‘Bright Lights’ seeds in the almost empty grocery store rack during my weekly shopping trip. I had no trouble at all germinating them.