I’ve written several posts about secateurs (sometimes called pruners, even though technically a pruner is a person who is pruning–the tool used to prune is often a pair of secateurs), how to choose a good pair, how to sharpen them, and today, how to clean them. I talk about them so much because I use them all the time. And anything that gets used that much needs cleaning.

From day to day use, bits of branches and such get stuck on the blades. 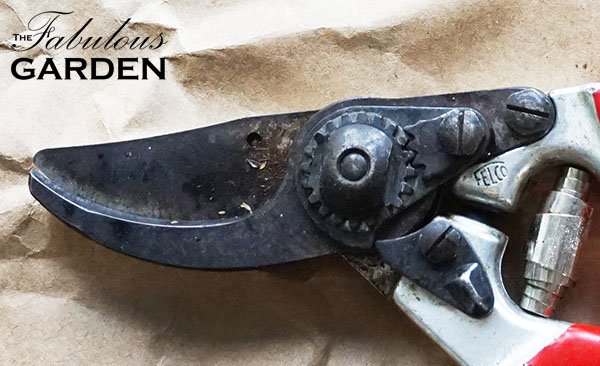 This kind of gunk makes the blades stick. As you’re making repeated cutting motions this makes the pruner tired faster, and it doesn’t lead to clean cuts.

I usually keep an old towel in my potting shed and use that (or, in a pinch, the leg of my jeans–yeah, it happens) to quickly wipe this kind of tree gunk off. It doesn’t do a perfect job but it’s usually good enough to remove the worst of it and be able to keep on with whatever I’m pruning in the moment.

But every so often I do give my secateurs a proper cleaning, not only to remove sap residue, but also to combat the effects of oxygen and moisture. Even for a well loved pair of secateurs like mine, that are dried if they get wet and are never left out in the garden when not in use, rust is a constant threat. I don’t usually see actual rust on the blades (just black oxidization), but I do see traces of it around the gear and bolts. And left untended, those discoloured blades will eventually rust as well. I am thankfull that I learned this lesson on cheap secateurs when I was first starting out, and not on my good ones! Rust buildup will make secateurs hard to use, and eventually destroy them altogether.

When I’m doing a thorough cleaning of my secateurs I do take them apart. I usually use a pair of needle nose vice grips and a screwdriver to get everything undone, but I finally found the handy dandy little tool (a piece of shaped metal, really) that came with my replacement secateur blades, and gave it a try. It worked, but I wouldn’t say it was any less awkward or faster than my old method, so use whatever you need to, to get your secateurs apart.

Pro tip–if you haven’t taken your secateurs apart and reassembled them a bunch of times, be sure to take a clear, close up picture of them with your phone before you disassemble them. Very handy to refer to in case you can’t remember how all the pieces fit back together! 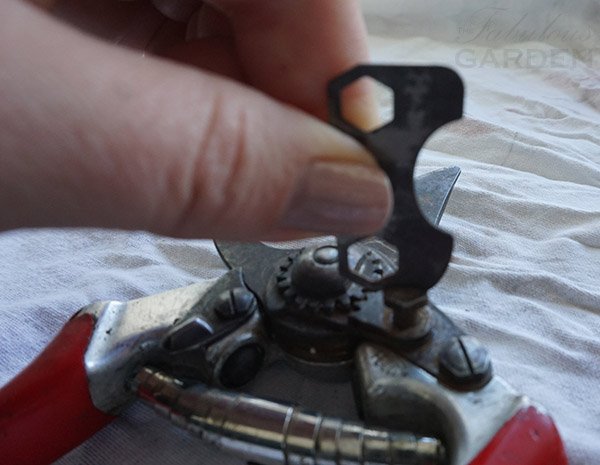 Once I had the pieces apart I use a metal polish to clean them. There are probably other decent products on the market, but the one I found and use is Autosol Metal Polish*. It comes in a tube, like toothpaste, and a little goes a long way.

I put a pea sized amount on the piece of metal I want to clean, and then use some elbow grease and a soft rag to polish the metal. If I was a good blogger I would have taken a picture of me polishing the dismantled pieces of my secateurs, but I didn’t. So here’s what it looks like when you apply the polish to fully assembled secateurs (which still works for cleaning the blade, but doesn’t get at the hidden rust under the gear and bolts.) 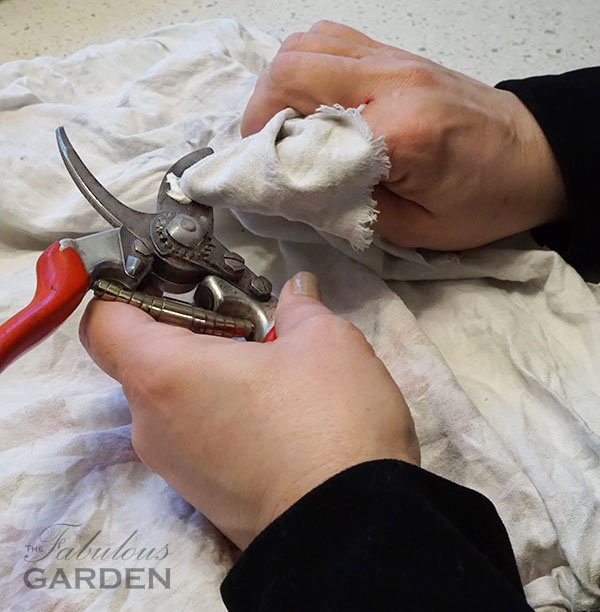 As you rub the polish on the metal, the black gunk (oxidization?) transfers onto the rag, just like how tarnish comes off of sterling silver flatware when you polish it.

Keep applying the polish, a little bit at a time, and working away at each section, and eventually you’ll have clean secateurs. I don’t try to get them perfect, but just work on them until they’re reasonably shiny again. 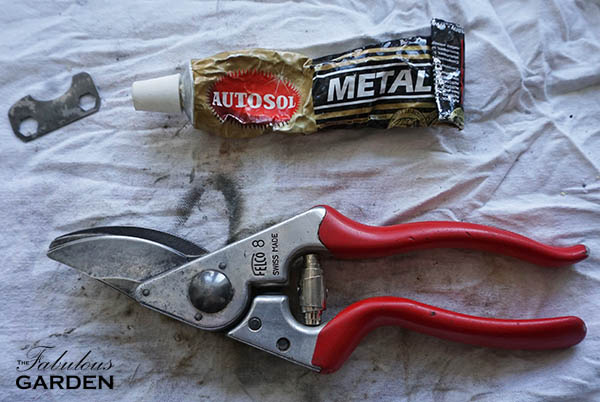 The final step, in order to keep rust at bay and not have to polish as often, is to coat all the metal parts with a thin coat of light oil*: 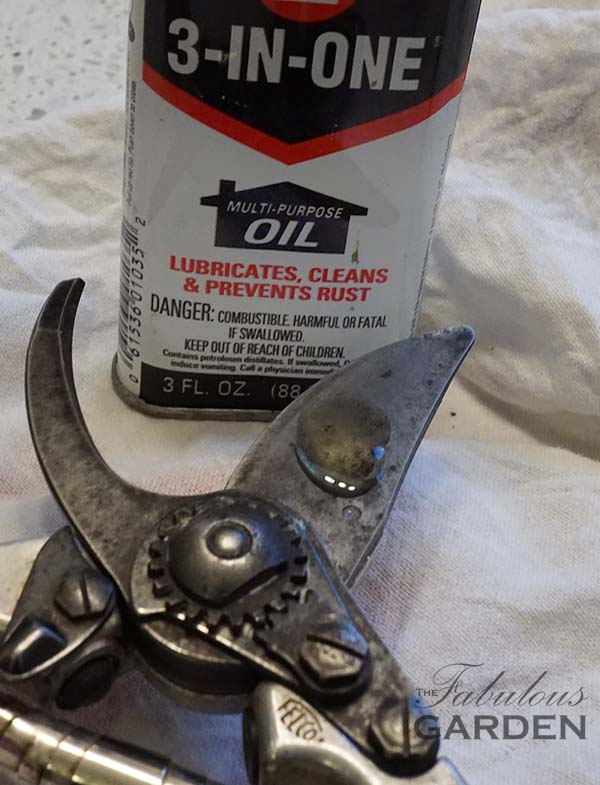 Oops, that was a bigger drop than I intended to dispense! But I used the rag to spread it all over the blades and associated gears and it turned out to be just the right amount.

And now my secateurs are ready for action–come on spring!

← Plant profile: BaptisiaHow to change the blade on a pair of secateurs →