Zucchini, also known by its French name, courgette, is reputed to be an incredibly easy plant to grow, and a prolific producer as well. During zucchini season there are jokes made about people breaking into cars and leaving a bag of zucchinis, so desperate are gardeners to get rid of their excess. Fortunately, there are many delicious ways to enjoy this vegetable–grilled, stuffed, pureed in soup, and as an ingredient in baking.

To grow well, it likes six or more hours of direct sun every day, an average amount of water, and good rich soil (i.e. add some compost!)

Zucchini plants get BIG. They don’t get tall but they do spread in all directions–easily 1.5 metres (roughly 1.5 yards) across. Most varieties are not natural climbers–they lack the little tendrils that would allow them to grip a support–but I have read of people tying them up as they grow in order to restrain the size of their footprint. There are some varieties of summer squash (which is what a zucchini is), like ‘Trombeta di Albenga’ that will grow vertically naturally. 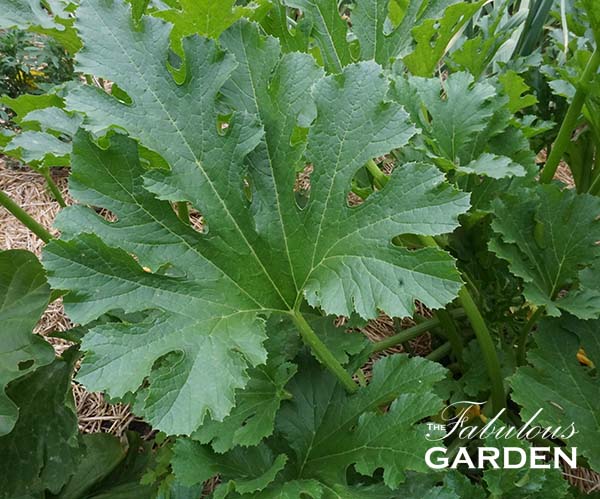 I’ve never had a problem getting zucchini plants to start growing in my garden, whether I planted seeds directly in the ground, or transplanted small seedlings, but I have had a problem keeping them alive long enough to get more than a few zucchini off of them. 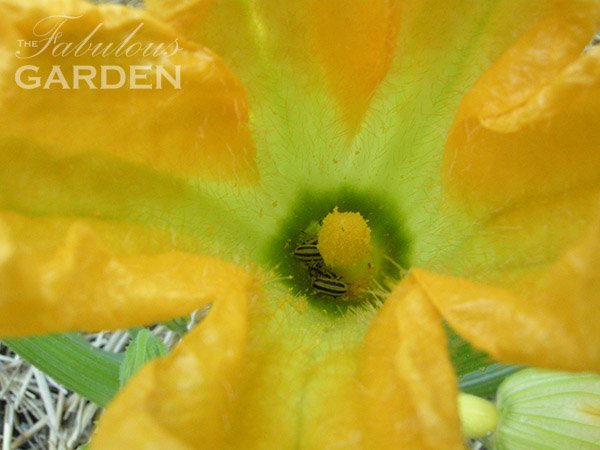 The problem has been a horrendous little pest called a striped cucumber beetle. They’re often found deep in the throat of the flowers. 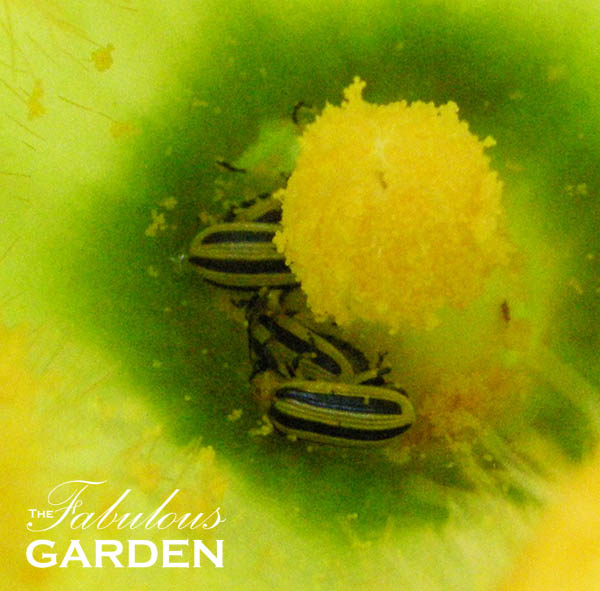 They’re quite small and zucchini plants are huge, so how much damage could these little critters do? A lot, and it’s not because of their voracious appetites.

“Far and away the greater threat posed by cucumber beetle infestation is the potential for transmission of bacterial wilt. Bacterial wilt is caused by the bacterium Erwinia tracheiphila, which is stored in the intestinal tract of adult cucumber beetles. Once a plant is infected, the Erwinia bacterium spreads rapidly through the vascular system of the plant, creating resins which restrict the movement of water and nutrients. This causes the plant to wilt and die, sometimes in as few as seven days.” That’s the excellent explanation of their destructive potential from organic seed grower High Mowing Seeds.

To combat striped cucumber beetles I cover my plants with a thin fabric, referred to as a row cover (the one I’ve used is Agribon*) when they’re young. But once they get big enough to bloom, I need to take the cover off, in order for the flowers to be pollinated and set fruit (i.e. make baby zucchinis). At that point, my only real option for keeping the beetles at bay is to hand pick them off of the plants and squish or drown them.

There isn’t any sort of natural or otherwise spray that I, as a home gardener in Canada, can use. Testing is currently being done on commercial Canadian farms for an organic product–a type of finely ground clay that impedes the beetles–but it’s not yet available for personal use. It is available for purchase in the U.S. so for my American readers, here’s a link to Surround Kaolin Clay.* 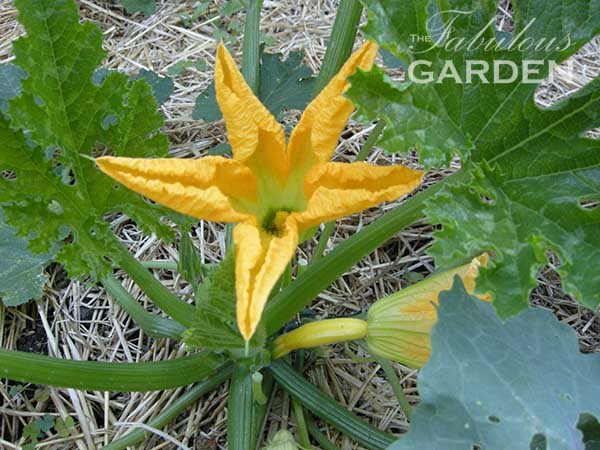 One of the most frustrating things for me about these beetles is that they seem to have a real affinity for my garden, but not my next door neighbour’s. We live and garden cheek by jowl in the city, yet he’s been easily growing zucchini for years, while I’ve been struggling on the other side of our shared chain link fence. I’ve tried several different varieties, including the one my neighbour usually grows, with no better success rate.

The last few years I’ve been growing yellow zucchini, just because they look nice in a stir fry and they’re just as easy to grow as the green ones so why not? I look for varieties marketed as being resistant to bacterial wilt in the hopes of having a better chance against the nefarious cucumber beetles.

Besides cucumber beetles, zucchini plants are also susceptible to a disease called powdery mildew, which shows up as grey/white patches on the leaves. I find that the bacterial wilt carried by the cucumber beetles does my plants in long before powdery mildew gets to the level of being a serious problem, so it’s not something I’ve every really worried about.

Most years I get half a dozen zucchini and then the plants are toast. This past summer I had better luck than in past years; the plants actually survived into August and we harvested quite a few zucchini. It was a joy to finally have a fairly prolific harvest for once! Some of them ended up in zucchini bread–you can find my recipe here. It’s one I created myself, and is the just right (in my opinion) mix of being moist but not greasy. It works equally well with fresh or frozen grated zucchini. 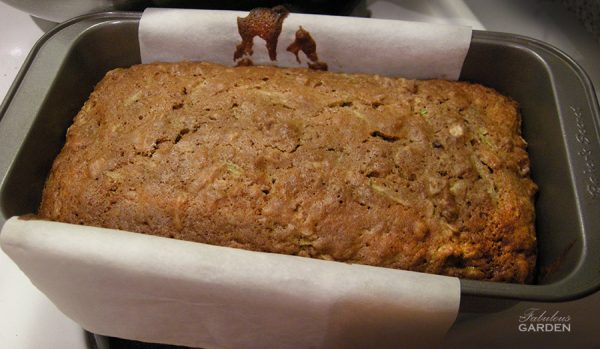