My grandparents lived through the depression, and, like most people of that era, were into “recycling” and “reusing” multiple decades before those terms were trendy. I’ve left some of their frugal practices by the wayside (saving, drying, and reusing teabags, for one!) but others have value that endures, and that’s the case with my grandfather’s plant ties.

Some of my earliest memories of gardens are from time spent at my maternal grandparents. They had a few small flowerbeds and, as you might expect, a fairly large and prolific vegetable garden. While I don’t remember my grandfather working in the garden, although I’m sure he did, I do remember him preparing plant ties to attach his tomatoes to supports, and keep certain flowers from tumbling over.

He knew that a good plant tie needs to be strong yet also soft enough not to damage the tender stems of a young plant. A neutral colour would be good as it wouldn’t stand out. For a tall plant you need to tie it to its stake at multiple points along the stem as it grows, so you need a number of ties.

What did my grandfather have on hand that was strong, very soft, a neutral colour, and plentiful? My grandmother’s nylon stockings, which had been “ruined” with runs or snags, of course!

They were perfect. They stretched enough to let the plant move in the wind without snapping off but were firm enough to keep it securely held. The colour was subtle and blended in with the stake and the foliage. And even better, there was a plentiful supply, as grandma’s stockings (just like the nylon stockings still being made today) snagged and ripped very easily. 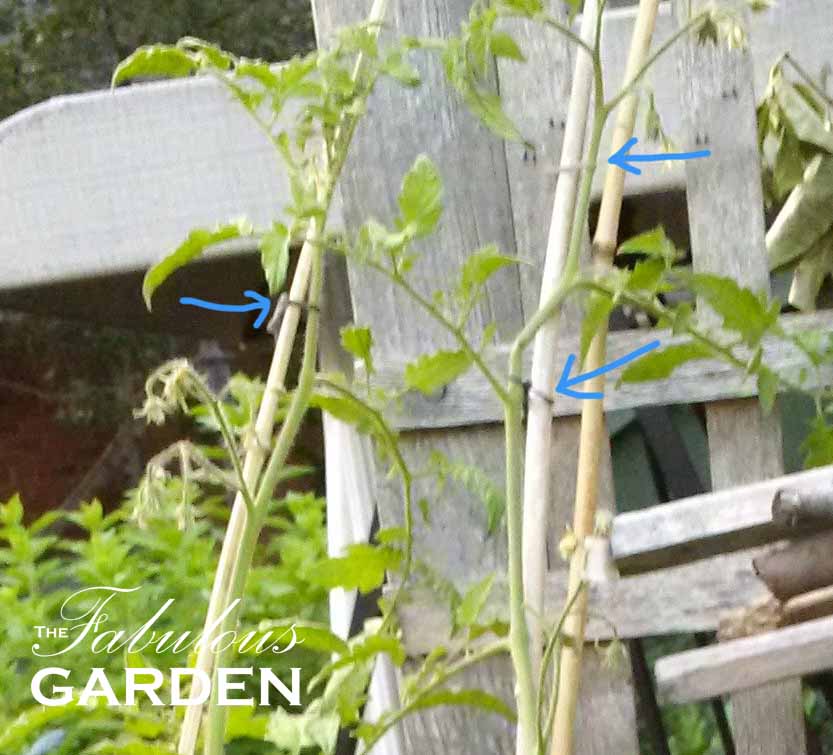 I don’t know if Grandpa came up with this idea himself or borrowed it from someone else, but I do know that he had his own system of stretching a stocking over a metal pipe and, using a sharp blade, cutting a long continuous spiral of nylon. He’d wind the nylon “string” into a ball, and then cut it to whatever length he needed in the garden. Voila, whatever size of plant tie he needed, he had it.

My father, and then I, have continued to use ties made out of nylon stockings in our gardens, because they work so well and we like the idea of keeping things out of the landfill as long as possible. However, we have streamlined the manufacturing process, resulting in shorter ties, instead of one long piece of nylon “rope” that has to be cut later. I don’t use these ties much on tomato plants since I adopted my modified string method of supporting them, but there are always plants that need to be tucked and tied in, including the thorny stems of my climbing roses.

All you need to make these perfect thrifty plant ties is a sharp pair of scissors and some nylon stockings (also called pantyhose, or, knee-highs for the sock-like version). If you don’t wear them yourself, there is likely a female in your circle of family and friends who would be willing to hand over a wrecked pair for the benefit of your garden. Despite amazing scientific breakthroughs in many other fields, stockings are still made to run or rip at the slightest stress, so finding a damaged pair should not be difficult. Tights, which are like nylon stockings but made out of thicker and often more colourful fabric, would also work for this, but the plant ties will be thicker.

These plant ties only take a minute to make. To show you how I’ve created both a video and then also (below the video) step by step photo instructions, in case that’s easier for you to follow. 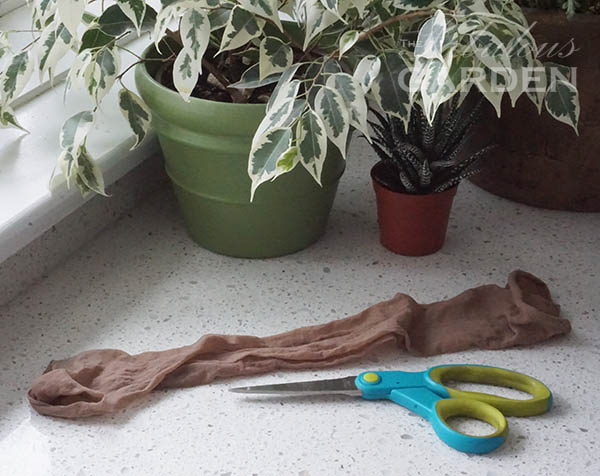 Supplies: one nylon stocking leg (actually, a knee high) and a pair of scissors 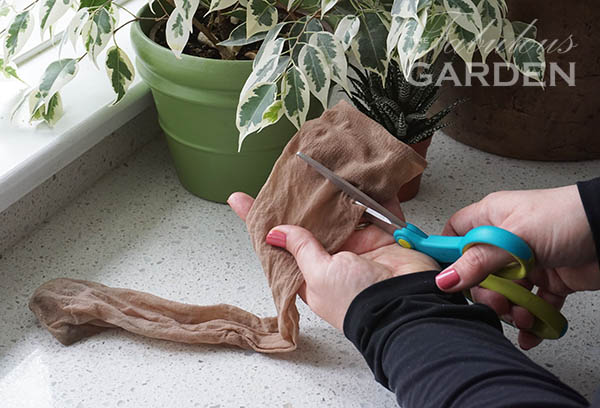 Cut off the toe end and the reinforced elastic at the top (if you’re using a full pair of pantyhose cut off the panty part–this DIY just uses the legs). 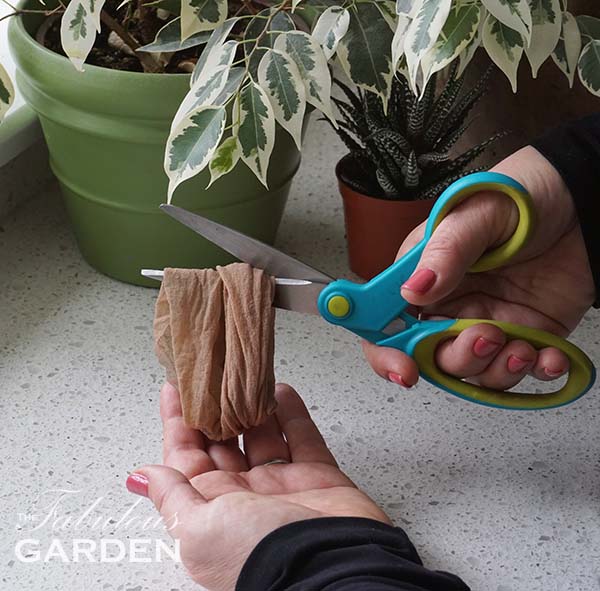 Scrunch up the leg material in the same manner as you would before putting them on, and then insert your scissors and cut across the top (effectively, you’re slicing up the entire length of the leg). 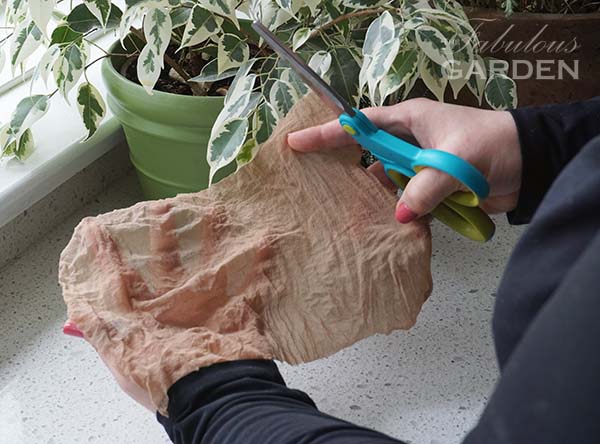 After slicing, you end up with a rectangle of fabric, which you will fold in half for the next step. 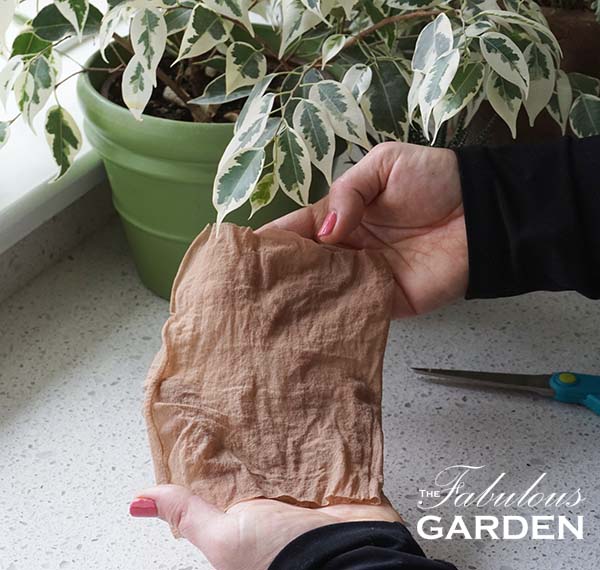 Take the smaller, folded fabric rectangle and cut along the fold. This will make two pieces of fabric, one on top of the other. 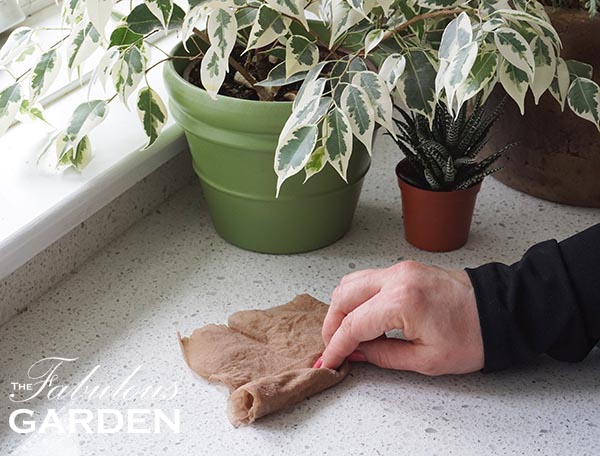 Roll the fabric up into a cigar-like shape. 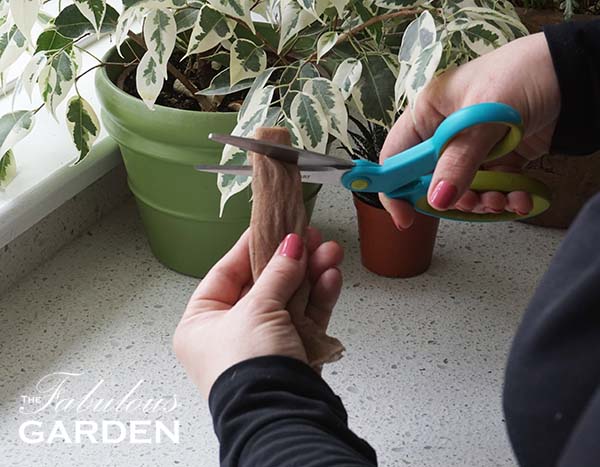 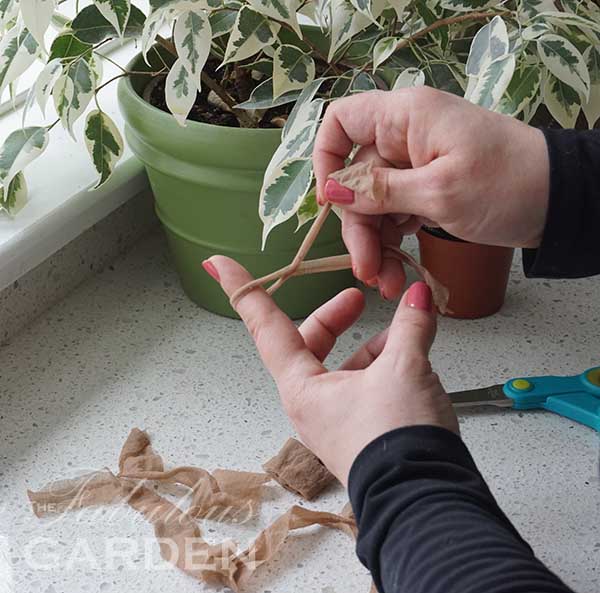 Unwind the little rolls and you have a pile of perfect and thrifty plant ties!

Bonus tip: to keep my plant ties in one spot in my potting shed I keep them in an empty tissue box and pull them out as needed. 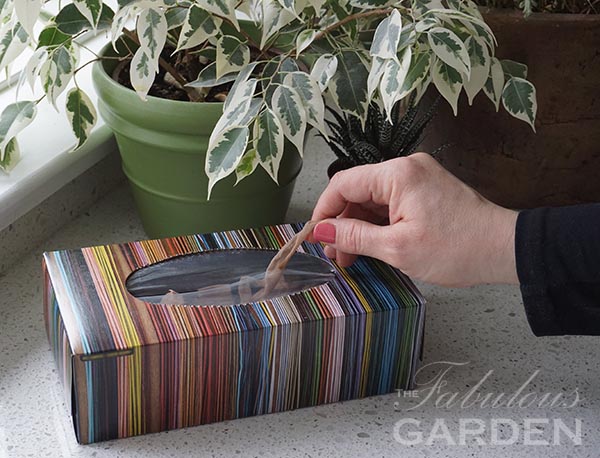 ← Garden Gloves: the good, the bad and the weirdHow to Divide a Bleeding Heart →