I spend a lot of winter hours staring out the windows at my sleeping garden so the concept of having something of “winter interest” in the garden is pretty important to me. When you read about creating winter interest the discussion usually centres on making sure you plant some evergreens, ornamental grasses, and trees and shrubs with interesting shapes or textured bark. I think those are great practices, but nothing adds more winter interest to a garden than a bird feeder.

We have several in our garden, both in the front and back yards, that we keep filled from early fall until late spring. As a result, our house has become the neighbourhood hangout for cardinals, finches, sparrows, juncos, nuthatches, woodpeckers, mourning doves, chickadees and the odd blue jay. Almost any time of the day, from dawn to dusk, I can look out the windows and see at least a few birds flitting about. The neighbourhood cardinals—eight pairs this year–often show up together at the margins of the day. 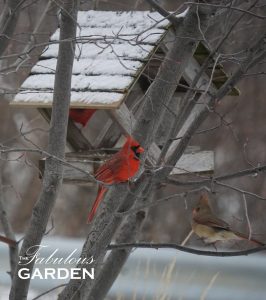 I think it’s especially important to keep feeders filled during times when it’s difficult for birds to find other food. Winter, especially late winter, can be tough slogging for birds that can only rely on foraging leftover berries and seeds from forested areas. Ice and snow storms also make food even more difficult to get at, which is why we often trek outside to fill the feeders right after a storm, even if we’re not venturing out for any other reason. 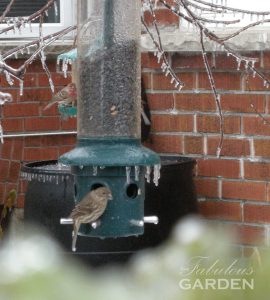 I’ve learned that if I look out the window and don’t see any birds it means that either the neighbour’s cat is about or there are hawks cruising above, searching for a lunch of smaller birds or animals. Both of these predators know that feeders are good hunting ground. Some people have suggested that we do birds a disservice by feeding them, both because we centralize them to make them easier prey for predators, and that we cause them to rely on humans too much. Cornell has researched this, looking at the effect on birdfeeders and bird population health, and concluded that birdfeeders are benign overall—the feeding helps some species and doesn’t seem to hinder others. The Cornell scientists do, however, point to one significant positive impact of backyard birdfeeding:“it allows people to feel connected to the natural world.” 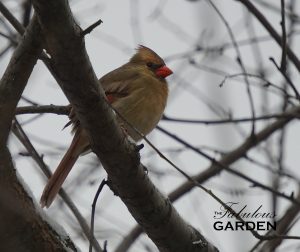 When I first started hanging bird feeders I filled them with black oil sunflower seed. This is a favourite of many birds and was hugely popular. But it has two downsides:

1.We have a lot of squirrels and squirrels love sunflower seeds. We were going through many big bags of seed in a season and the cost was not sustainable.

2.Sunflower seeds, and their shells, contain a natural chemical (sesquiterpene lactones) that stunt the growth of any plants trying to grow near them. That’s great if you’re trying to grow a field of sunflowers without any weeds, but not so great if you have a birdfeeder or three hanging in the middle of your perennial garden.

I learned, from the nice gardeners who run my local bird food store, that safflower seed is a good substitute for sunflower seed. Safflower doesn’t contain any plant-stunting chemicals, cardinals love it, and many other birds will eat it. I do have to rake up (or shovel!) all of the hulls off my garden in the spring, as they form a thick mat that would impede most plants from growing up through it. I also find some safflower seedlings sprouting under the birdfeeders in the summer, but they’re not overly plentiful and weed out easily.

But, the big benefit of safflower seed, as far as I’m concerned, is that squirrels don’t like safflower seed as much as other seeds.

That’s not to say they never eat it; right about this time of year they get desperate enough to develop a taste for it. But they don’t seem to go through very much so I’m content to let them have a bit of a snack too–if they’re willing to work for it: 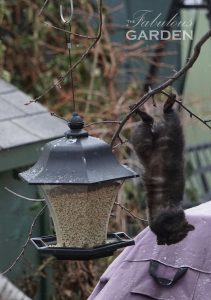 Besides the safflower, we also put out cylinder feeders full of nyjer seed—a tiny black seed that smaller birds such as finches just love. Sometimes we’ll have 8 or 10 of them on the feeder at once. According to the Cornell Lab of Ornithology, the seed of an invasive thistle used to be sold for these types of feeders. Thankfully njyer seed, the seed of a daisy-like plant named Guizotia abyssinica, was found to be a good substitute. These daisies are not invasive and all nyjer seeds are heat-sterilized during importation to limit their chance of germinating, while still retaining their food value. 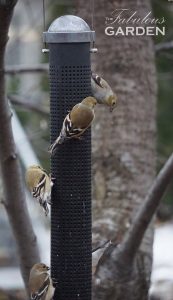 Cornell has a detailed article on choosing the right type of bird food if you are interested in learning even more. They do caution that “In general, mixtures that contain red millet, oats, and other “fillers” are not attractive to most birds and can lead to a lot of waste as the birds sort through the mix.”

I’ve found, through my own experience, and talking to birders, that you do get what you pay for when it comes to birdseed. Birds won’t eat old seed, which is what is sometimes what you find at grocery stores and some big box stores. Also, be aware that cheap birdseed mixes that contain a lot of fillers will attract pigeons. They have a right to live and eat too, but I’m not interested in having a flock of pigeons in my feeder, crowding out all of the smaller birds and leaving copious droppings behind. I buy my birdseed at a store that specializes in food for wild birds–I’ve been shopping there for quite a while and had good results with their products.

If you don’t yet have a birdfeeder in your garden I encourage you to get one—it will bring you the joy of life in your garden during the months of the year when it’s needed most: 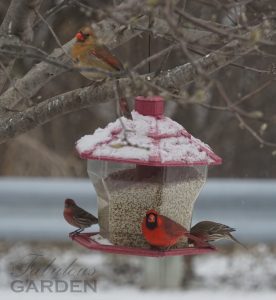 Looking to identify the birds visiting your feeder? The Audubon Society has an online bird guide and Cornell has a free bird id app that you can download.

← What is that giant green thing on my tomato plant?Keeping birds safe from windows →