Hanging baskets are a must have in my garden. In particular, I love to have a big basket of bright red geraniums hanging on the front of my garage. They’re easy to find at a good price and they pack a lot of oomph. What I don’t love is the cheap plastic hanger and basket that they come in. 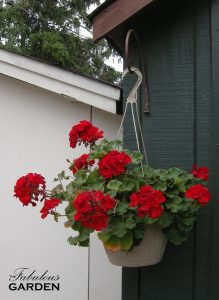 It’s so easy to do better, putting that geranium into a larger wire hanging basket with a coir liner. Besides looking better, the geranium will also grow better–more on why in a minute.

This is an upgrade that literally takes less than 5 minutes, and the trickiest part is getting the geranium out of the plastic planter in tact. Maybe everyone else has it figured out, but I know I broke a lot of plant stems over the years before I learned the right way to getting the plastic hanger off the pot.

The plastic hanger is attached to the plastic pot with three little clips: 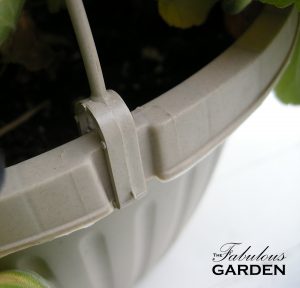 Short of cutting them off (which doubled my time for this upgrade, as that meant rooting around in the potting shed to find something to cut the plastic with), I couldn’t figure out how to get them apart. Until one day, someone showed me the trick.

If you already know how to do it, just skip down the post. For the rest of you, here it is:

Grasp the plastic hanger just above the clip and push down. 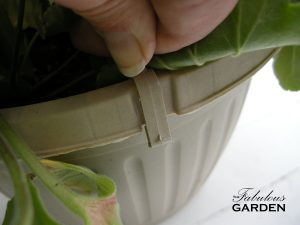 That’s it. Pushing down brings the lip of the clip below the pot rim, and then you can easily pop it away from the pot and off. Do that for all three clips and the hanger will be off the pot.

There are many mangled plants that wish I had learned that trick a long time ago.

Anyhow, once I had the clips off I could turn the pot upside down and remove the geranium: 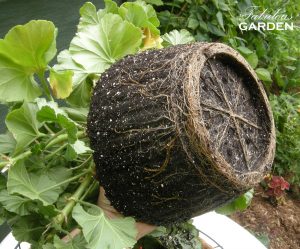 Wow, that’s not a good scene for a plant that’s was sold with the expectation that it would spend its whole life in that hanging basket! This is only early summer but you can already see how the roots are densely packed around what was the bottom of the pot. There is nowhere else for them to go.

This is why I said that the geranium would grow better in the nicer hanging basket–it will have a lot more room for the roots to spread and grow. The larger volume of soil will also retain moisture better, which is really important as we hit the super-hot days of summer where baskets can easily dry out in a single day. 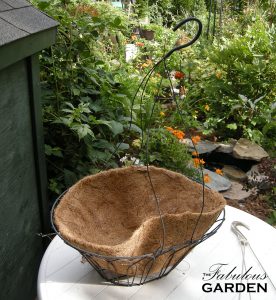 This is a wire hanging basket I’ve had for several years, fitted with a new coir liner I purchased at a garden centre this season. Some of the coir liners available today have a layer of plastic in between the coir, which aids in moisture retention. It’s a good idea but if you buy that kind of liner you MUST make sure you perforate the bottom of it in several places so that water can drain out of the pot. I killed a very nice fuschia plant by drowning it before I discovered that hidden plastic layer was there. The liner I bought this time doesn’t have a plastic layer so I didn’t need to poke any holes in it.

I filled the liner about half way with a good quality potting mix, making a plant-sized indentation in the middle. If I was going to add some slow release fertilizer (which is a good idea for a basket like this), this would’ve been the time to mix it into the soil. 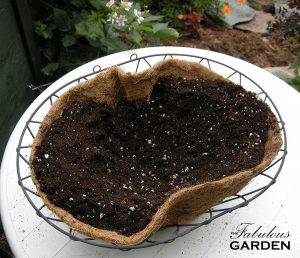 Then I took the geranium and popped it into the new basket. Because the roots were quite pot-bound, I teased them out a bit first, so that they could spread into the soil instead of staying compacted. I don’t have a picture of that, because there is only so much you can do with a camera in one hand and a plant in the other. 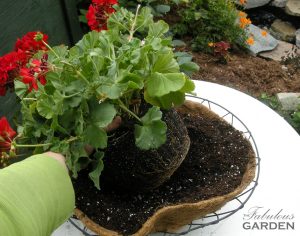 I snugged the plant firmly into the soil, and then topped up the basket with more soil: 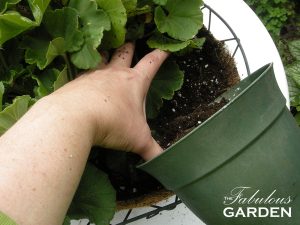 Then I watered thoroughly, until water ran out the bottom of the pot, to ensure that all of the potting mix was saturated. 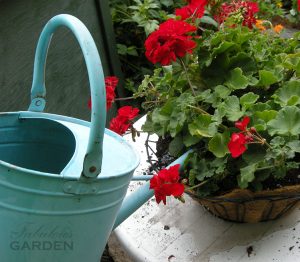 And here’s the geranium, back on its hook by the garage. 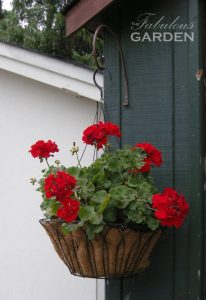 It won’t be long until it fills out the basket. Often when friends come by late in the summer and see the giant basket of blooms it will become they ask where I purchased such a huge plant. Then I explain that it didn’t start out that way.

I’ll water this basket as it needs it throughout the summer. Geraniums bloom best when they’re kept on the dry side, and when all the spent blooms are dead headed (i.e. snipped off). At the end of the growing season I will compost the plant and the potting soil. The liner I used this year will likely be good for at least one more season, so I’ll keep it, along with the wire basket.

I used a geranium in this example, but there’s no reason you couldn’t do this with other plants. Do keep in mind that you must be extra careful when potting plants with brittle stems (such as hanging begonias); they might need a bit longer to recover from the move.

Do you have a hanging basket that could use an upgrade? There’s still time to do it this year! If not,  pick up a nice hanging basket and liner when they’re on sale later this summer when the garden centres clear them out and you’ll be ready for next year.

← 5 Rules for Watering Your GardenHow to harvest garlic →